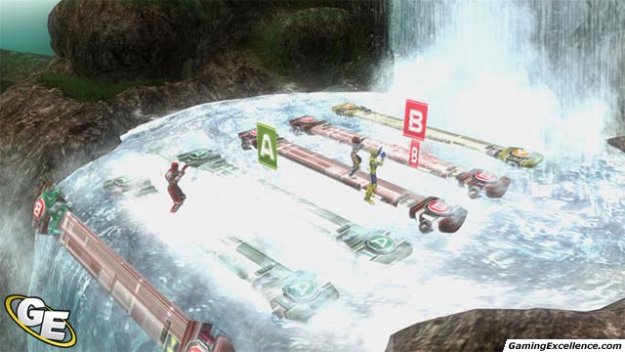 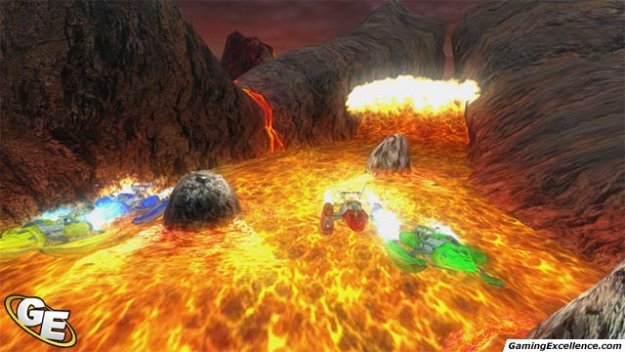 I am not a fan of party games or compilation games. Actually, strike that: I am not a fan of bad party games or bad compilation games. The problem is that there are more bad ones than good ones. And if you're creating a title with 30, 40 or even 70 mini-games, how good, deep or polished can each game really be? Well, Clubhouse Games for the DS gets it right. WarioWare features more games and is a blast. Mario Party, Super Monkey Ball, heck, even the mini-games in The Guy Game are enjoyable! But the trap that Fuzion Frenzy 2 seems to fall in is simply that it tries to make each game control and play the same. While this is nice from a user-friendly perspective, it also brings boredom on very quickly. Add to that the lack of an overall stat or progress tracking aspect, a tournament mode that is cringe inducing and a featureless online experience and you have a perfect example of the party/compilation game gone wrong.

The highlight of Fuzion Frenzy 2 is, not surprisingly, the games themselves. While there are 40-some-odd games in here though, many just seem like derivatives of each other. There are 7 planets to pick games from and each one has its own theme (i.e. Icicle has winter-inspired games). The games generally last from ten seconds to a minute and oddly enough, focus more on skill than luck (like in other party games). While some are quasi-button-masher-types, others really allow you to use your head and quick reflexes. Each game features four players, three of which can be controlled by the A.I. While playing against the A.I. you'll soon note patterns and behaviors depending on the difficulty you're playing on. Against live opponents though, you'll note that the games start to feel a lot different. And this should be the case: Fuzion Frenzy 2 is made to be played against real opponents and while the Live community for the title seems very thin at the moment, if you have friends over (and have three other controllers sitting around) it's a fun little distraction.

While there is a story behind FF2, it's negligible. In fact, most of FF2's presentation is all flash and no substance. Sure there are six different characters to choose from, each one looking like an angst-filled cool teen, but they basically all control and play the same. They don't even have the personalities they had in FF1. There's also no stat tracking, no character customization, no upgrades, no unlockables (besides a few more games) and no real reason to keep playing the game besides enjoying the games themselves; which gets old fast. Add to that the bare-bone menus, the anemic online modes, the skeleton online community and a real lack of game modes/options and you have a title that doesn't seem as appealing as it really should be.

In all modes (single player, online, multiplayer) you'll have the option to simply chose a game a play it. Picking a game gives you a nice description of its rules (never more than two or three sentences) and a diagram of its controls (FF2 tries to make similar actions to the same buttons to make things easier). Thirty seconds later you'll be done playing and ready to move on to the next one. Great! But what if you want a little more context and substance? Well, in theory, this is where the tournament mode comes into play. Designed as a game show of sorts where you'll battle across the various planets in order to "win them over", this mode includes such things as power-up cards, mini free-for-alls for loot and without question, the world's most annoying game show host. I have a special hatred in my soul for this character and everything he says. Picture a mix of Chris Tucker (from The Fifth Element) with Chris Tucker (from Rush Hour) and the world's most annoying human being and that's not even remotely close to what you have in store here. Sure you can mute him, but you can't really skip his endless monologs and inane ramblings and just his gesticulations alone will drive you insane. Pressing B will eventually skip to the next of his segments, but while playing online, you're stuck! Tournament mode could've been a nice place to spend time, but it's simply so infuriating that no one I know cares to play it. And the fact that to unlocked the six6 last mini-games you'll need to play through Tournament mode using all six characters seems like a particularly loathsome brand of punishment from Hudson Soft and Microsoft. Thanks guys... really!

If there's a bright side to all this complaining it's that FF2 controls well, does offer 40+ games that range from "meh" to "okay" to "fun" that are all easy to pick up and play and does feature colorful worlds for the most part. Online play is lag free and when you do find a group to play with, you'll generally stay together for a while. It's really too bad that the game doesn't keep track of wins/losses or other stats. It's also fun to note that most avoid the tournament mode and stick to the ten or so games that are actually fun. FF2's audio is adequate, but forgettable, and as mentioned suffers from greatly from having the most annoying character ever, with voice-work that is simply grating.

In the end, Fuzion Frenzy 2 is simply an average (at best) party/compilation game that lacks depth, an overall sense of continuity and fun. The tournament mode is almost unplayable due to its host, the single player game feels mostly pointless and the multiplayer aspect lacks proper stat tracking. As a regular priced game, it's hard to justify this purchase (except for the truly masochistic out there) and even harder to justify playing it for any great length of time. There are certainly better party games out there.