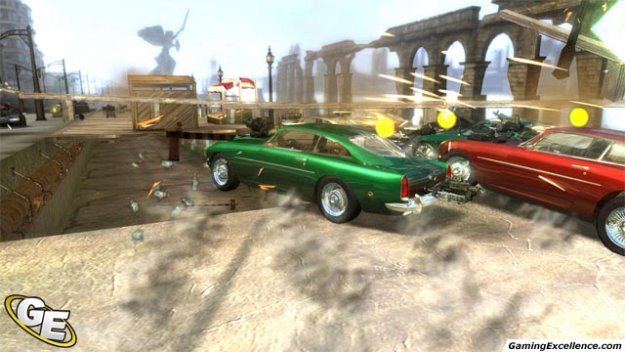 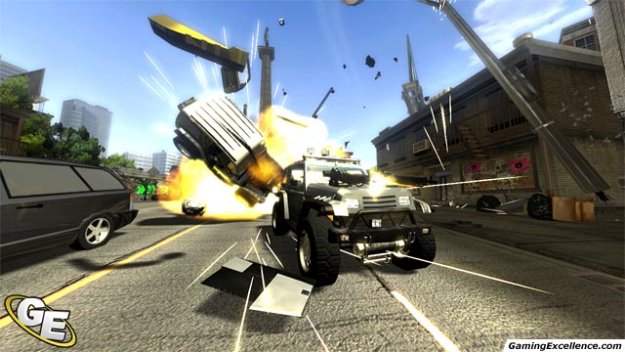 I'll admit it right away: of all of the games that were available for preview at X'05 Canada, Full Auto was not on my "must play" list. In fact, I had never even heard about it before the show. However, having confessed straight up, I now have to admit that it was this game that I played more than any other at the show. Even more than Dead or Alive 4 or Project Gotham Racing 3, a surprise to say the least.

First with some details about the game. Full Auto is racing with a twist: machine guns and rocket launchers to be precise. Every car is outfitted with these seemingly necessary tools to gain a competitive advantage over opponents. Developed by the brilliant minds at Pseudo Interactive and published by Sega, Full Auto is the most fun I've had since playing Burnout 3. And trust me when I say this: you definitely do not want to meet me on the roads these days.

Aggressive driving is the name of the game, and it is taken to the extreme. In Full Auto, players must not only place in the top three in a race through crowded downtown streets with civilian drivers in the way and a mess of other obstacles, but they also must earn "Wreck Points" for destroying anything and everything around them. This is where the fun begins because almost everything you see on screen turns out to be "removable". For example, is there a slow, pesky civilian vehicle in the way? No problem. You have the choice of using the machine gun or rocket launcher, ramming the vehicle with your car, or of course driving around. The latter may not be as boring as it initially seems because street lights, signs, and just about anything else can either be run over or blown up while pulling your tactical evasive maneouver.

Come to think of it, I think I spent more time completely destroying the levels at high speed than actually chasing or leading the pack of eight in the actual race. This is where Full Auto seems to shine. Almost everything in the levels is destructable, which provides endless fun as no two laps will be the same. On top of this however, there are several features to this game that inspire tactical gameplay. First is the ability to rewind time and replay sections that went badly in what is known as the "Unwreck" feature. Also on the list are the differences in cars. In the version we played, there were two available to choose from. Each one not only varied in speed and handling as is usually the case in racing games, but also in weapon configuration. One of these had the machine gun and rocket launcher front mounted, while the other had the rocket launcher on the front and the machine gun on the rear for the ability to attack those who are following a little too closely.

The graphics of Full Auto are well done, and the sound seems to be too. What makes this game stand out though is its faced-paced action and its ability to hook players by appearing to be merely simple fun at first, but after prolonged exposure players will realize the level of depth this game has to offer. If I were you, I'd keep and eye out for this one.