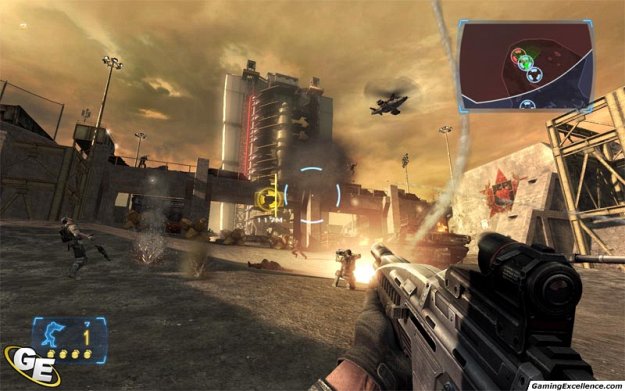 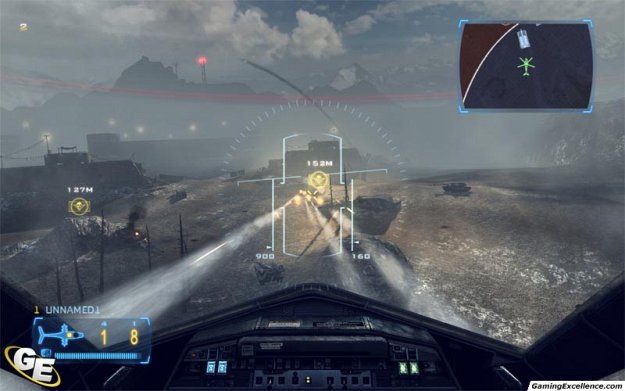 With online first person shooters a dime a dozen, it's difficult to really stand out among the crowd. Frontlines: With the next generation consoles making it so easy to update a game after release, it doesn't mean the consumer should readily accept an unfinished product either. Unfortunately, Frontlines: Fuel of War falls into both of these traps. On its own merits, it's not a bad game; it just seems to be lacking a certain polish that we've come to expect from modern shooters.

Frontlines: Fuel of War is set in a near future that feels as if it could happen. You have the Coalition, a group composed of the USA and European Union, and the Red Star, a group composed of Russians and Asians. These two sides are fighting over the last remaining good oil reserves in the world to alleviate their peoples suffering through blackouts and the like. While not terrifically idealistic these are fairly believable conditions and they make for a game grounded in the real world.

The game itself is broken up into two modes, single player and multiplayer over Xbox Live. While the single player mode is more fleshed out than in some comparable games it is still horrific in its scope. For the most part this mode is nothing more than a bunch of maps with what feel like bots on both your side and that of your opponents. There is something of a story used to string it all together but its paper thin and just an excuse to hop you around killing stuff which is all you can ask for. In theory that is. In practice this is a lot harder than you might expect seeing as how the AI for both sides of the fighting is dumb as a doornail and this game has some of the most odd physics I've ever seen.

The guns, while they look and sound great, couldn't hit the broad side of a barn from ten paces. Sometimes you'll be firing at an enemy and missing each shot but then a random stray bullet will register as a headshot and kill them in one shot. This isn't a constant occurrence but any time it happens it is guaranteed to frustrate. It seems as if all the guns fire off center even when you are looking down the sights in zoomed mode which is peculiar but workable once you're used to it. I don't know if this was purposeful or not but it makes some gunfights ridiculously frustrating.

On the other hand you have some remarkably laughable physics. Imagine you are in a tank, rumbling along at high speed and you see a small piece of wood in your path. Do you run over it figuring your tons of metal will let you bulldoze it or stop moving forward immediately and try to head around the wood? If you figured you'd simply run it over, you'd be wrong! You'd best go around that wood since you will quite rapidly learn that the smallest piece of wood will send your front aiming straight up. Don't be surprised if you find yourself pointing skyward from running into a fence.

You wouldn't think this would be an issue but you will quite rapidly find that the on foot controls, which are largely quite good don't prepare you for the crud that is the vehicle controls. Someone decided that the model of controls pioneered by Halo and Red Faction and that has been used in most games since wasn't going to cut it here. Why use one analog to control facing and the other to control movement like you do on foot, you get to use the left analog for all your movement purposes. This means that turning requires you to massage the analog stick into the proper direction without sending yourself speeding forward and it isn't easy in the midst of battle.

The meat and potatoes of this game lie in the multiplayer, typically up to around 32 players. There has been talk of 50 man matches although this never materialized during my time with the game. When you join a game you will find that you have a number of objectives to attend to where yours and the enemies occupied areas border. Along this border you will fight for various supply points, depots and the like. By occupying them and taking them from your enemies you advance your cause.

Advancing your cause is more than just hyperbole here; you literally can push back your enemies' occupied area by stealing their zones. When you claim and control all the points along the front line you will push it back into your enemies' area and giving you a bunch of new objectives to be gone after. Continue doing this, back and forth, until you push your enemies back to their base and seize that to fully defeat them. Obviously this is all a lot easier said than done.

Online play for a game like this on a console would make this a definitive online experience if all was well in online land. However this is not to be. There are a number of problems that plague this mode that make it all but impossible to fully immerse yourself in this experience. While you might have had problems shooting the guns before, expect a lot more issues now. Thanks to lag and just frame rate problems you will generally find yourself emptying clips at your foes and not hurting them at all only to be killed by a single shotgun blast from a random enemy. Falling through maps is not uncommon, glitches such as this abound in some maps and it's incredibly annoying and shows a disappointing lack of polish.

The official servers for the game can be a bit problematic at times as well giving you plenty of connection problems when all you want to do is join a quick game. To top off all the other problems there is no voice chat unless you form a special four man squad with people. This is incredibly problematic and while it was likely done to help immersion seeing as how most people will end up in the same place at the same time large scale coordination options would have been nice.