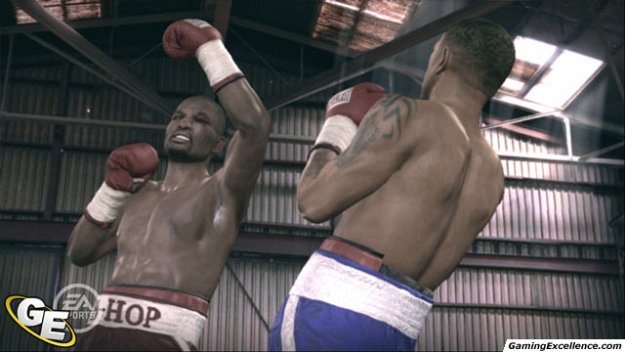 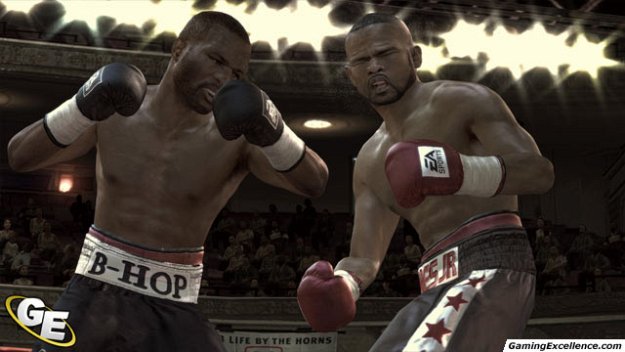 To many, myself included, boxing seems very much like a sport in which grown men pound each other senseless for others' enjoyment. Of course there's more to boxing than that, but besides the movies we've seen, the sparse terminology we've picked up and the few recognizable faces of the sport, we don't really know what it's all about. And now, EA releases what is hands down the best looking game ever made and everyone, boxing fanatics and neophytes alike, take note. The problem however, is that many sport titles feature complex control schemes, obscure rules and intricacies/nuances and a learning curve that punishes those unfamiliar with the sport thereby alienating casual gamers that may have an interest in the game. Well, unlike the Maddens and NHL/NBA games, Fight Night Round 3 is a game so well designed that any gamer (boxing fan, casual gamer, grandparent, sister, mother, stand-up comic, coma patient, etc) can pick up, enjoy, appreciate and even learn something from. And yes, even the brutal realism of two grown men pounding each other senseless sure looks pretty.

Fight Night Round 3 is, as of this writing, the best-looking video game on any platform. With the advent of the X360, it seems like that phrase is being uttered more and more, and it seems to always coincide with an EA game. Rightfully so, EA has put every other developer to shame with its mastery of the X360 hardware and its photorealistic games. From the various venues, the crowds, the background details and the boxers themselves, every square inch of FNR3 looks so real you'll swear you're looking at video as opposed to a game. Much has been made of the graphics and deservedly so, every punch, drop of sweat, ounce of blood is perfectly rendered. So good are the X360's graphics that all HUD have been removed from the series (although they can still be turned on if needed). If your opponent is starting to feel the effects of your uppercuts, you'll see it. If your own boxer is starting to lose stamina, you'll see (and feel) it. Never has there been a game before FNR3 where the quality of the graphics is as integral to the game as the control scheme. But such is the state of affairs and although a few clipping errors occur from time to time (feet going through the mat, gloves meshing into one another) there is truly nothing that detracts from the spell that FNR3 casts. I have played games that have been "immersive" before, but when playing Fight Night Round 3, it's more like being captivated. You twist your body, fidget in your seat, sway and bob from side to side and are powerless to stop it. The line between game and reality blurs even further.

The prettiest game would still get a low score though if it didn't have gameplay in its corner. This is where the beauty of Fight Night's control scheme comes in. Veterans will love the total punch control where the left thumbstick controls your boxer's movement while the right thumbstick is used to perform every single blow you can think of. The thumbstick is divided into two planes (right and left) each mapped to a hand. Hitting the right thumbstick up-right will perform a right straight, a right hook motion with the stick performs a right hook and winding the stick up a bit before hooking it produces an upper cut. The same happens to the left. The triggers control lean/parry/blocking while the face buttons are mapped to specific actions such as illegal blows or clinching (hugging) your opponent. Needless to say, the control scheme is brilliant and very intuitive. Newcomers not as familiar with the series can opt for various other control schemes which facilitate matters as well, but an online victory using buttons over thumbsticks feels a little cheap.

While much was made of Fight Night 2's haymaker and its balancing issues, the concerns have been addressed and two other powerful (but fair) moves have been added. The flash KO, when it connects, is a teeth rattling blow that dazes your opponent for a few seconds opening him up for successive combos. The other new move/mini-game is the stun punch which, after connecting, shifts the action into a reverse first-person view (you view the action from your opponent's POV) which can easily change the momentum of the entire bout. These, like all other moves, take no prior of knowledge of boxing to decipher/execute and such is the true beauty of Round 3 and of boxing in general; there aren't any 10-hit combos to learn, this isn't a DOA clone or a fighting game. This is methodical, intelligent aggression. There is instinct, there is a battle plan, there is pacing and there is momentum. Given 5 minutes of playing and this is plainly obvious. And as a newcomer to the series (and to boxing in general), this was its most impressive feat: it made me appreciate the simplicity, strategy, depth and beauty of boxing. I may not become the biggest fan ever, but I will take note next time I catch it on TV.

Amazing graphics and impressive gameplay is the core of Fight Night Round 3 and on their strength alone are enough to recommend the game to anyone. There are however, a host of issues with the game that make it less fun than it could be, but oddly enough, never really detract from the overall experience. The manual, as with all EA games of late, is bare-bones and useless. The in-game tutorial is not really helpful and the training mini-games take a lot of trial and error to figure out. The in-game menus are boring and simplistic; the menu graphics are unimaginative and drab. The ESPN license is never really used to any great potential. The ring girls look good graphically, but there are only three of them and even the official Fight Night Round 3 Ring Girl doesn't get more face time than others (plus she's barely recognizable). There aren't many modes of play. The online portion suffers from lag (when parrying) and the interface is ho-hum. The stat tracking is not that great. A rival mode that's not well implemented. And the Live Achievements are too easy to get.

The meat of the game, career mode, is bare bones, very much in line with every other EA sports series that has appeared on the X360. This gist of it is basically as follows: pick a contract to sign from a few choices, train, fight, and gain popularity, repeat until you get a shot at the next title. Sure, there's money to be made and equipment to buy, but nothing really fun. And yet, while the career mode feels very repetitive, it never really seems to get old. That's saying a lot about the fun to be had where it counts: the fights themselves. It should also be noted that while the create-a-boxer mode isn't as fleshed out as Tiger Wood's, it's incredibly intuitive and you can create some pretty fun anomalies of nature. You can also opt to go through career mode rebuilding the career of a known boxer (i.e. Ali, etc).

Like most EA games, FNR3 features all the rap music you'd expect. Luckily, the songs aren't as aggravating as in other series and they actually fit real well with the theme. The announcers do a fine job but after a half-dozen matches you'll start to know their schtick from beginning to end. The highlight here is truly your trainer (and your opponent's trainer too) who give you advice between rounds. The comments are intelligent, insightful and actually useful. In the course of over 40 matches, I don't think I ever skipped these once. Plus, seeing the damage you've inflicted on your opponent while he's being lectured is good reconnaissance.

Yes, we've seen quite a few nice looking racing games on the X360 so far, a few platformers and a lot of sport titles, but nothing has been as demonstrative of the X360's power and capability as Fight Night Round 3 is. An amazing game that any gamer can appreciate on various levels, this is without question the opening salvo signaling the true beginning of next-generation gaming. Intuitive, fun and able to reach even non-fans of the sport. Fight Night Round 3 is nothing short of spectacular. And a boxing game of all things; who would have thought?