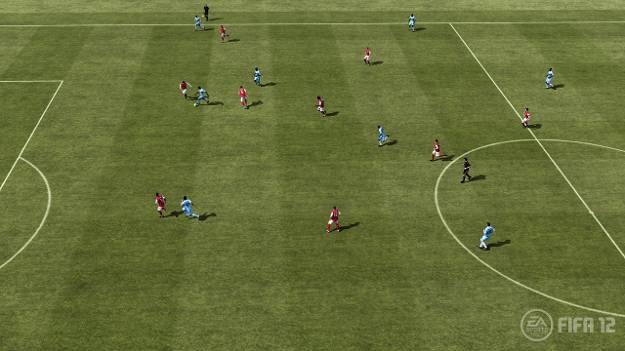 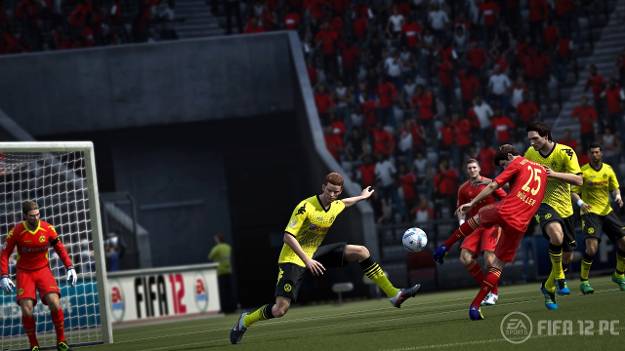 Last year when I received FIFA 11, I knew exactly what I was getting myself into. For the past half decade the FIFA series has been a pillar of success for EA. Each new game brings about a solid experience, incrementally improving upon its predecessor. FIFA 12 is no different and stays true to the course. It provides a thoroughly enjoyable experience and makes improvements that likely gives us gamers the best soccer game on any platform to date.

This run of success is likely also the biggest knock for the franchise, as when you stay so close to perfection, it's difficult to make changes that provide for a noticeably new experience. With this being said, FIFA 12 is an extremely entertaining title but suffers from a single player campaign that is remarkably similar to last year's iteration. Aside from minor improvements across the board and a revamped defensive system, players who stay offline and enjoy only the single player experience are likely hard pressed to notice much of a difference from last year.

The main draw for previous owners purchasing this year's game will be seen if you're a soccer fan who takes full advantage of the online offerings. This year's game brings forth new options for online competition and introduces EA Sports Football Club that brings new dynamics to supporting your favourite team. Every point you earn counts towards your club's success in a worldwide ranking, bringing new depth to the game in terms of how successful you are and how much experience you gain.

The strongest component to FIFA is its remarkably fun and realistic gameplay. The improvements to the already solid dribbling system make you feel like a real star as you run down the pitch. Striking the ball and curving it just past the keeper is extraordinarily satisfying and making your opponents look like fools as you skillfully deke around them with the ball is a joy to watch. Controls are tight and responsive and give you the ability to mimic your player's real life counterpart. FIFA 12 without a doubt gives you the most lifelike soccer experience possible without leaving the comforts of your living room.

The AI opponents and teammates within the game do an impressive job of playing their part as well, helping enrich the experience. When the attacking team has the ball, your defensive teammate cover their man and attack at the right moment. Alternatively on offense, the AI will get the ball to the open man and make incredible passes in the air that turn into one touch strikes on net. Your AI counterparts don't need your assistance to create beautiful plays, and this is a credit to the developers. Your computer teammates will not disappoint you and do an extremely good job of playing their position.

In terms of major improvements and additions to this year's game, the defensive system and how you defend against attackers has been completely recreated, and a new physics engine has been implemented. In previous games, when it came to defence your best bet for stealing the ball was to either place a well timed slide tackle or run up close to the opposing player and hit the appropriate button. With FIFA 12, the development team has implement a jockeying system wherein you hold down a button a take a defensive stance a couple yards from the attacker. This system plays more how you'd expect a soccer player to defend and gives a structured approach to the defensive side of the game. To compliment this new defensive system a more realistic physics engine has also been incorporated. If you run into a player, the game will react appropriately, sending one or both players to the ground. If you chase after an opponent with a ball you can grab at his jersey and realistically slow him down. These small improvements to an already solid game inch the FIFA series ever closer to perfection.

The other significant additions to FIFA 12 come in the way of new online game modes and features. In addition to the competitive matches and seasons online, there is now a head to head game mode wherein you compete in unique ten game seasons amongst friends. The best teams get promote and the bottom dwellers are relegated. At the end of each season the best teams compete for a trophy to add to their collection and gloat about to their friends. These mini seasons restart after each trophy has been won and add an excellent way for friends to compete. Also appearing within the online modes are unranked friendly matches as well as the 11 player online matches (including the goalie which was introduced last year) where each position is controlled by an individual on two opposing teams.

What FIFA brings new to the online modes, it seems to skip over in the single player component of the game. Making a return are the Be a Pro career mode, where you can create a player from scratch and play on your favourite team. Also, if you'd prefer taking a more high level approach you can play as the manager, controlling fixtures, salaries and trades. If you're after both experiences you can also create a player/manager career. These modes are all familiar and play out as you'd expect, so the lack of innovation and new choices is rather surprising. What this means for you is that if you do not plan to take advantage of FIFA 12's online offerings, it may be difficult to justify purchasing this year iteration if you already own FIFA 11.

On the other hand, FIFA 12's presentation, graphics and sound design are impeccable and help make for a smooth and engrossing experience. The menus in game are well designed and easy to read, making navigation from one mode to another a breeze. When you hit the pitch player models look realistic, the stadiums look superb and making a run down the line looks as realistic as possible. Commentary is top notch, replicating what you would hear in a live broadcast and the roar and apprehension of the crowd is easily discernable as the game progresses. EA Sports has spared no expensive in terms of the presentation of this game, giving it an extremely high level of care and quality.

FIFA 12 is arguably the best soccer game released by any developer to date. The authenticity of the gameplay, the quality of the presentation and the large selection of modes make for an extremely rich and satisfying experience. What FIFA lacks in new single player modes is easily made up for in the overall quality and satisfaction of the experience on the pitch. The question then comes to you the gamer. Are you a huge soccer fan, who needs your fix every year for the latest and greatest soccer game? If so, don't even hesitate, FIFA 12 is the game for you.