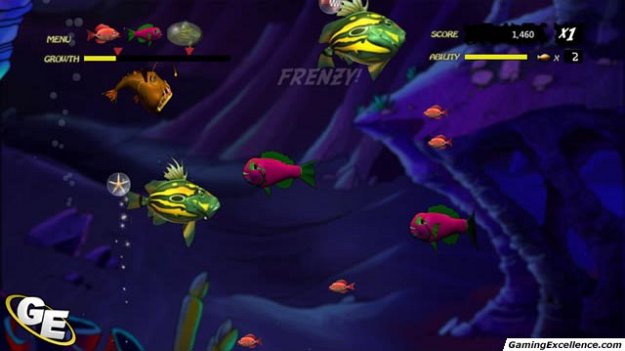 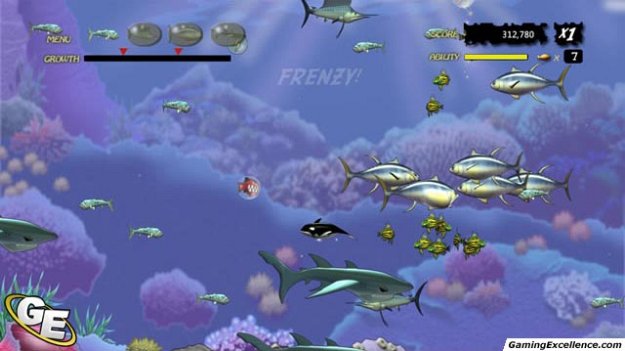 Feeding Frenzy is simply one of those games that is fun while it lasts, but doesn't last very long. If you've played the demo, you've literally experienced exactly what the full game has to offer. Yes, the fish change, the pond you're in gets bigger, but there is hardly any new nuance thrown into later levels to really change things up. Feeding Frenzy is still a fun game, but one that younger gamers may appreciate more than older ones.

Developed by Sprout Games, Feeding Frenzy is the story of a little fish that must avoid bigger fish while filling his appetite. When he eats enough fish, he obviously gets bigger and thus is able to chomp on larger and larger fish. Most stages require three growth changes each of which are achieved by eating a prerequisite amount of fish, as monitored by a status bar in the top corner. Luckily, swimming around is well handled and the controls are easy to master. You basically just move your thumbstick around to move the fish. Yes, there's also a very useful dash ability as well and a special ability that usually allows you to suck smaller fish in, but that's it. Elegant and simple.

Feeding Frenzy features two modes of play, and this is where the overall problem with the game lies. Story mode is repetitive and easy (beaten in an hour or so) and Time Attack is repetitive and still pretty easy (and also beaten in an hour or so if you're mildly skilled). While each modes are fun and the visuals are neat, there's very little need to go through the game again and again unless you want to unlock all the achievements (which are pretty easy to snag by the way - except for the Play For 10 Hours, uh.). The game does also keep track of various statistics and scores, but there really isn't any great incentive to be at the top of your friends' list with this one.

For smaller children, the visual are pleasant, the sounds and music very soothing and the difficulty (while never hard) does ramp up nicely. The game is easy to control and it may indeed be a younger audience that was targeted with this game. Children will also enjoy seeing their fish grow in size and ability and the little story that ties each level together may please them. As an adult however, Time Attack was the only true saving grace for this title, its first level actually being the hardest of the bunch to beat. And while playing you can make the game a little harder by attempting to grab all the pearls from the bottom of the ocean.

In the end, this is a decent entry into the Live Arcade library, but one that will seriously please younger gamers a lot more than older ones expecting a challenge or loads of variety.