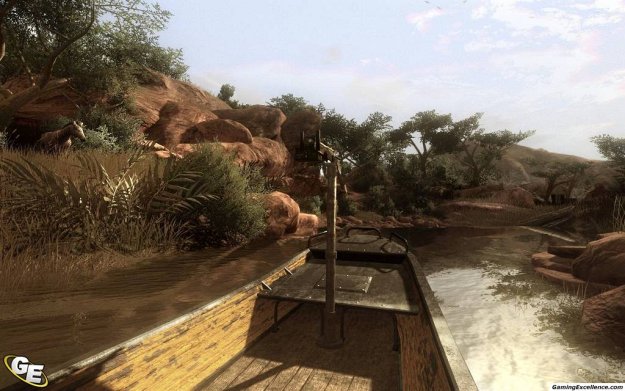 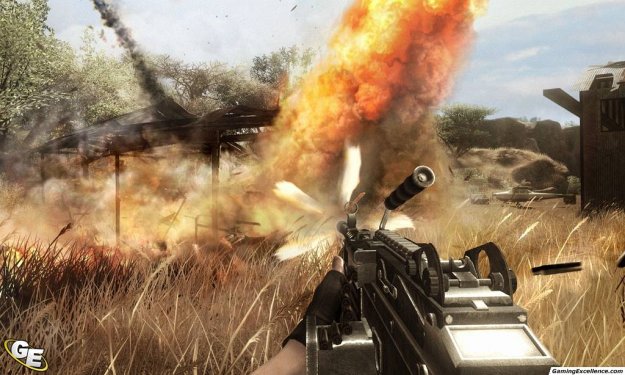 When making a game, the top priority of a game developer should be fun, that's the most important thing. If your game looks great, has great music and some incredibly novel ideas but it just isn't fun then there's little point to it. This is especially important when attempting to make a "realistic" game since developers have a tendency to let real world physics get in the way of a good time. Compounding this frustration is the fact that there are often glaring breaks from reality in other ways often leaving the player scratching their head as to why they've been so unfortunately gimped by the design decisions.

Far Cry 2 takes place in a fictitious portion of Africa where two local warlords have turned the region into a bloodbath. The APR and UFLL are fighting on and off to try and seize control of this part of the country. Not only are the locals part of the fighting but mercenaries from all over the world have been brought in to pad out their numbers. You are a mercenary as well but you're not here for the mercenaries, you're here for the Jackal; the arms dealer who is outfitting both sides in this insane war.

That's about the most interesting part of the story, what unfolds as you actually play through the game is boring and predictable but it's passable enough to move you along through the missions. But the storyline is only half of what matters in this game, what's more important than that is the freedom that you have. You can do storyline missions if you like but you could also complete assassination missions for money, attack armed convoys to gain access to new weapons or just ride around the land finding the hidden diamonds. It's up to you and there's a good 50 hours worth of stuff to do if you don't bother with the main quest.

When talking about the actual gameplay Far Cry 2 begins to flounder pretty hard. This comes down to a number of issues namely the weapons and respawning enemies.

Now we understand that firing a gun in the real world is a chaotic, messy affair. Your accuracy is pretty bad if you're even so much as moving slowly and it takes a whole lot of practice to do this without hurting yourself. When this chaos is translated properly into a video game this can really enhance the realistic feel of a title. But when it is translated poorly you can't help but feel frustrated with how the game works. Some of the guns in this game are almost entirely useless, even if you happen to have purchased the accuracy upgrades, due to the insane amount of kickback you receive when firing them.

What makes this all the worse is the fact that the enemies in this game are idiot savants. They vaguely understand how to use cover but they're pretty stupid about it. Sometimes they will run around like chickens with their heads cut off, seemingly having no destination. But when they decide to stop and shoot you're likely to be hit thanks to their often immaculate aim. Even better is the fact that they're not hampered by little things like you hiding in thick foliage - once they've spotted you they can hunt you down with ease and shoot through cover. Pair this up with the fact that they take too many body shots to kill (i.e. shirtless guy takes six to eight machinegun rounds to the chest) unless you're a headshot master.

It's pretty impossible to discuss this game without talking about the obnoxious respawning enemies. Even if you drive around the map, killing enemies as you go, they will spawn in about five minutes after they were killed. This includes roving enemies in vehicles and the guard posts. What this means is that in the process of completing a few missions you could very easily kill a hundred enemy soldiers. That's excessive to say the least. It never stops, it never gets better (unless you sneak by) and the only thing that makes them chase you less (your reputation) gets reset part-way through the game which leaves you at square one all over again.

The most infuriating thing is that Far Cry 2 could have been easily improved by paying attention to what fans had said about other open world games. Who here doesn't remember the sheer frustration that was Morrowind? While a great game it was crippled by limited fast travel while full of obnoxious enemies that never went away and could chase you down with ease. Seeing as how Far Cry 2 has both of these problems in spades it's pretty confusing as to why we are seeing a game making these same mistakes years after the fact. Infinitely respawning enemies might pad out your games length but they're incredibly annoying to deal with as a gamer.

Even though there are a lot of problems with this game there's one thing that really needs to be said right now - this is a beautiful game. The flora and fauna all look incredibly well done and no game in recent memory has had fire that looked this hypnotic. The plants can be torched through a variety of means which makes for a great time if you're a pyromaniac. Even better is the realism in this - yellow, dry savannah grass burs far more readily than healthy, green grass.

The enemies don't look quite as good but since they're mostly seen at a range you would barely notice their stiff movements or lack of variety. What you will most likely see instead is them moving around cover while you set it on fire or blow it up which is more than distracting enough to not really make it an issue. You will likely be more distracted, and paying more attention, to the dynamic weather and day and night effects than you will how the enemies look.

Sound in Far Cry 2 is passable enough, the music isn't the most memorable but the voice acting is surprisingly good. Pretty much every single character in the game is voiced convincingly enough that you're never pulled out of the experience which is more than some top-tier games can say.

So long as you only play the game in small bursts, Far Cry 2 is an interesting experience. Sneaking around, killing enemies with a variety of weapons and setting up explosive traps on the fly are a whole lot of fun. But the respawning enemies are a serious issue since they're so damnable difficult to kill or even evade. If Ubisoft released a patch that decreased the enemy respawn rate to a few times per in-game day then playability would increase nearly ten-fold. However that's not likely to happen so be mindful of this problem when deciding whether or not to purchase this title.