Family Guy: Back to the Multiverse (X360) 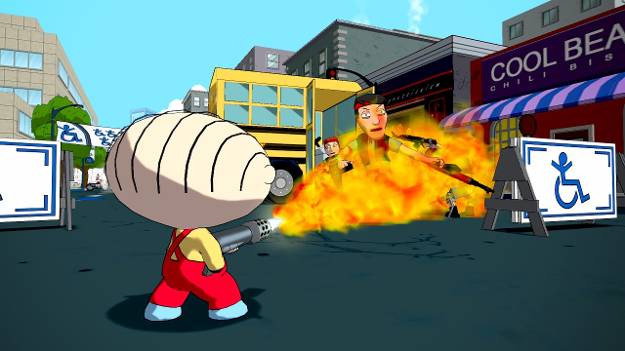 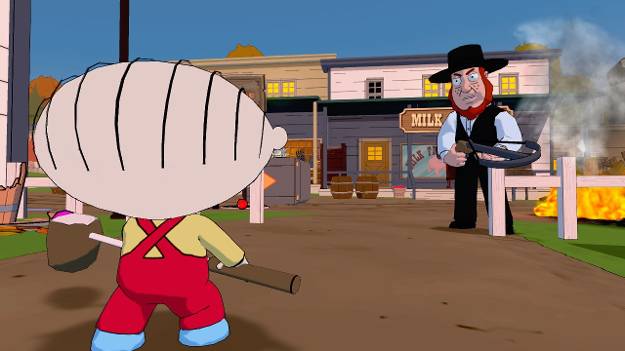 Yes indeed the Giant Chicken is back in this rowdy video game nod to Family Guy. I wasn't quite sure what to expect when walking into the demo for this one, but I was incredibly blown away by how hilariously fun this game was. In it, Stewie is being chased by his half-brother Bertram throughout the multiverses (apparently because Stewie has killed Bertram and now a multiverse version of Bertram is trying to stop him). Remember that episode Road to the Multiverse, Season 8 Episode 1? Well that episode will give fans some hints and clues as to what sort of things to expect in the game. Basically, it's hilariously funny Family Guy before Family Guy's humor started getting questionable.

Stewie and Brian are both playable characters in this game, with drop in and out cooperative play available. When two players are in at the same time, the game's difficulty will go up a little in response, when the other player leaves it will go down a bit. The game is ten levels of romping through various different multiverses with characters, jokes, sight gags and references to the Family Guy series.

I was struck by how incredibly like the show the game looked, with the characters being very good 3D representations. There were cameo appearences of show characters everywhere, from the Greased Up Deaf Guy to our friendly neighborhood pedo, Herbert. There are sight gags in the form of posters and animations being performed by characters in the background, and there are animated cut scenes going in as well. Activision is currently working with Seth McFarlane and the Family Guy team to make sure that the cut scenes are acceptable before putting them into the game.

Combat is interesting, with a run and gun feel to it that made me giggle when I first saw it. Or, more preciously, I was giggling because Brian was busy snipping Amish characters from inside of a barn in the Amish multiverse level. Upon going outside, he and Stewie proceeded to shoot at the enemies, Stewie with the futuristic guns we're used to seeing him wield in the show, and Brian with his more realistic weapons. Occasionally through the game, you can find vortexes that lead to Stewie's armory that allow you to pick up other weapons that can be used in the game. 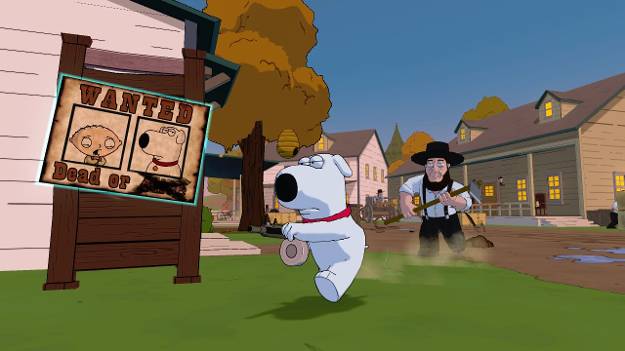 There is also melee combat and explosives in the game. During the demo, Activision showed Stewie using a shovel to smash his enemies and Brian used a broken bottle, a nice homage to his persistent drinking problem. Stewie uses a dirty diaper bomb that explodes once released, and there are various power ups in the game, such as the Giant Chicken. Once released, he jumps out and starts beating the ever living hell out of your enemies, looking just about as beat up as he does in the series.

Between the funny jokes, show references and combat that looked fairly accessible, I'm very interested in seeing this game come out. New material from the Family Guy writers is also a big draw here, especially since what I've seen in the game so far is actually funny and reminds me the fun I've had watching the show.