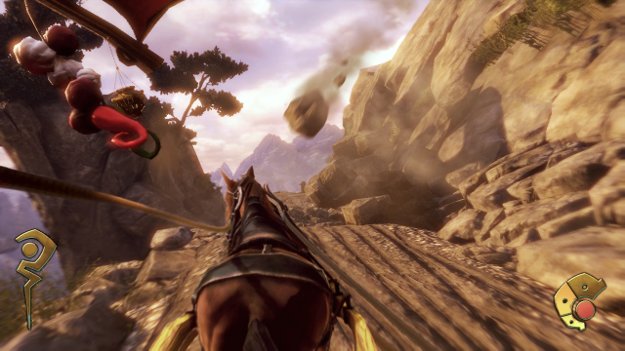 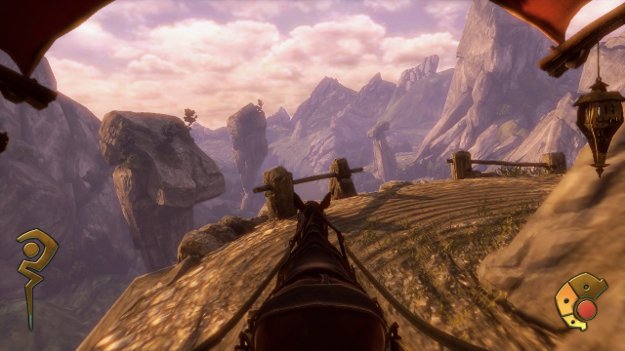 Microsoft debut the Kinect back in 2010. Ever since, they've been trying to prove to gamers that the Kinect isn’t just for kids and casual gamers. They haven’t been doing a great job of it. Most of the Kinect support for “hardcore” games has just been simple voice commands, some are a little more in depth than that, but not by much. So Microsoft needs to put out something to grab their core audience. Enter Fable: The Journey.

Fable had always been a series predicated on the duality of good an evil and giving the player the ability to choose which path to walk down. Fable has always been able to show you, immediately, the consequences of being Good or Evil. Sure the later Fable games have made it a bit more ambiguous than simply light and dark, but it’s always been at the core of the games. Lionhead studios felt it was necessary to do away with this choice mechanic. No idea why, it’s the biggest reason why people enjoy the Fable Games. Previous iterations of the franchise have also featured large areas to explore and a more open concept, Fable: The Journey is pretty linear through and through, and it’s unfortunate. 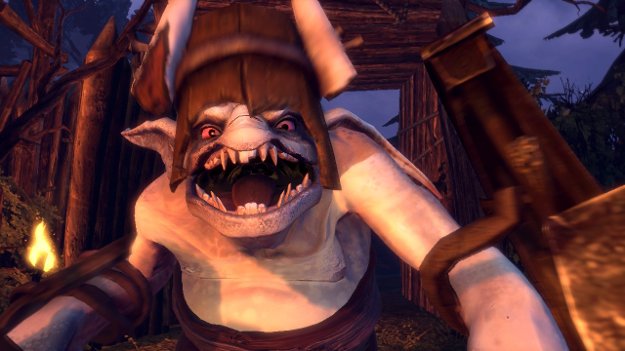 The Journey starts with the lovable (perhaps relatable) protagonist Gabriel, slacking off as usual. Once the captain of the caravan finds you it’s onward you go. The story set up is pretty basic, Gabriel is thrust into a conflict that he doesn’t want any part of. Once you meet Theresa the Blind Seer it’s pretty much all downhill from there. The story does showcase a lot more lore to the Fable universe than previous iterations, especially about Theresa. There’s not too much to the story other than that unfortunately. Fable: the Journey is broken up in two modes: Riding and Combat.

The game is played entirely with the Kinect. No controller in the slightest. You sit on your couch guiding the reigns of your Horse drawn carriage with your hands while riding. You can crack the reigns to speed up your horse or pull the reigns to your chest to slow her down. You collect experience as you ride in the form of orbs. Some orbs need to be traversed at a certain speed to obtain, slow or fast. While riding there are hazards to avoid and slight variations on paths. The riding is overall pretty boring to be honest. The biggest red flag that should make this pretty obvious is that the leader of the caravan tells Gabriel not to fall asleep at the reigns again. If the protagonist is so bored that he’s falling asleep guiding his horse through trails, then why should I be excited doing the same thing? It was difficult to even play The Journey just because of how boring the riding sections are. As you ride you may find Stopping Points where you can listen to dialog, or find treasure or get into combat. The treasure wasn’t entirely worth it. All you collect are just cards with Fable specific items on them. You can’t use them in game or anything useful like that. They just go to a separate collectibles menu.

The combat is played out like a standard rail shooter. You are playing in first person and Gabriel moves around a field for you as you fling magic at enemies with your hands. Your right hand controls your basic offensive spell and your left hand controls a push/pull spell that is used for utility. It is drilled into your head from the get-go that your push/pull spell is great for utility outside of combat. They mention this every time they possibly can. The problem with the combat is that the Kinect isn’t terribly accurate (at least it wasn’t for me). If I tried to cross my shots over to the left side of the TV with my right hand they usually just fizzled and went wherever they wanted. Not even in the general area that I wanted. This cause some serious problems. Even the blocking mechanic wouldn’t work every now and then. I found the whole combat experience unresponsive and unreliable. Again, this could just be my experience with it, others may vary. There is a calibration that you can do to attempt to fine tune the Kinect sensor to your living room/TV, but it turned out to be pretty ineffectual for me. 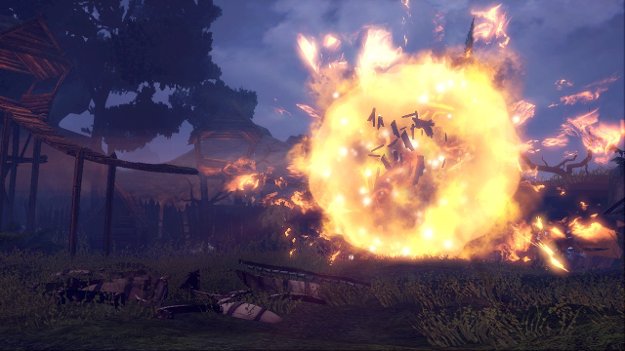 The fact that the game requires Kinect shouldn’t be a negative, but unfortunately it is here. There were many instances, in or out of combat, that I found a general unresponsiveness to it. I would exaggerate the gestures after the regular gestures wouldn’t work. Gestures that had worked prior to their failure. It caused me some damage to my horse, or myself, even once caused me to fall victim to the enemies. It’s just a general problem that I had, it may be my room set up. It also doesn’t help if your couch/chair is... well, comfortable. You need to have a high, firm, couch/chair, not one that actually lets you sink in and be comfortable. This is a bit of a problem for me, because when I got my couch, I chose one that was actually comfortable to play games in, not one that I wouldn’t want to enjoy lounging on... I figure I’m not the only one.

You also use the Kinect for healing or various other camp activities. There are a lot of moments where Kinect gestures are just shoved in your face. When your horse receives damage you have to make a stop at a rest point and heal your horse by patting her on the wounds. You do this a lot. You will be stopping at many of the rest spots due to damage. So I hope you really like Horses and petting them... You also camp between chapters where you can actually brush your horse, or feed her apples and do various other tasks. All requiring you to gesture with Kinect. Feeding your horse an apple actually requires you to go to the tree, put your hand in the air and pluck an apple, then hold it out for your horse to eat. It adds extra levels of involvement and immersion, but the whole process seems just unnecessary.

The graphics and sound are up to par with most current generation games. I don’t have any complaints or particular praise in this section. The voice acting is pretty well done, as with the other Fable games. There are some weird graphical irregularities, like some hands or other objects look less rendered on some characters. Some, but not all. It was just odd to look at. It wasn’t a big problem as that’s not your focal point. The enemies look menacing and the magic looks good. The whole appearance of the game is pretty great, there is still a wealth of colour in the world instead of the standard grey/brown of most AAA games.

Overall Fable: The Journey left me wanting. I found myself dreading having to play. It was boring, I think I, myself, nearly fell asleep a few times. I was really hopeful that I would be pleasantly surprised with this title. Unfortunately I was only surprised at how bored I was. The combat sections were supposed to be the most exciting and even then I found myself not caring too much about getting to them. It doesn’t help that I had some problems with the Kinect responding to me in some cases. I left Fable: The Journey pretty underwhelmed. I think Microsoft still needs to find that one hard core title, The Journey certainly isn’t it.