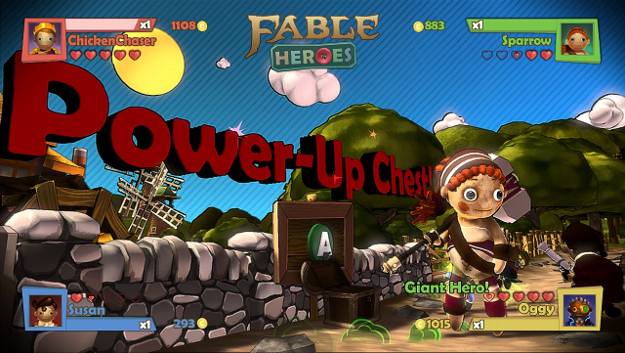 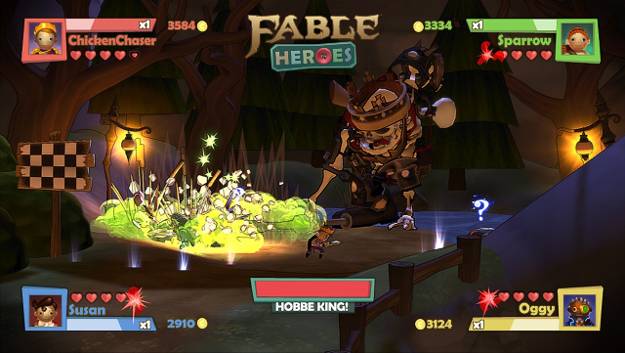 Your opinion - and therefore enjoyment - of Lionhead's happy-go-lucky XBLA experiment will be largely dependant on what you go in expecting. If you're anticipating an innovative experience or one deep enough to do the Fable franchise justice you will walk away disappointed. If you're merely after some throwaway fun, on the other hand, it's a great ride.

A family-friendly offshoot of the popular series, Heroes initially seems like a perfect fit for the downloadable medium. Here's how it works; up to four players take control of cute puppet versions of Fable's biggest heroes and villains on a table-top board. In a departure from the grandiose choices you'd face in the main series, you'll then battle these quirky souls through a series of hack-and-slash stages set in a beautiful, cell shaded world.

As you might expect, these cheerful levels primarily revolve around a rat-race to nab as much gold (via bludgeoning foes or the environment, and more than a little theft of your buddies' earnings) as is physically possible. This cash then allows you to purchase abilities via a clever and surprisingly layered board-game that crops up after each area. More loot means more goodies to upgrade your chosen character with, which then wins you yet more coins. Rinse and repeat and you have Heroes. 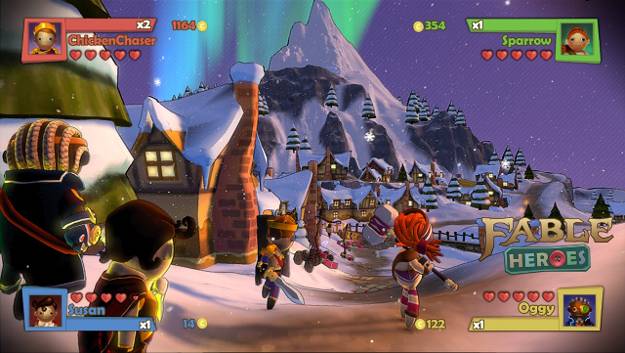 Sound good so far? Well, hold on for one moment. If you noticed my use of the word 'seems' lurking a couple of paragraphs above, you've unfortunately stumbled across the elephant in the room. Truth be told, this Fable isn't without considerable frayed edges; much like its retail counterparts, it appears destined to go down as a good idea that couldn't quite live up to its own promise.

The first point of contention would have to be its combat. Heroes has very little depth to its bread-and-butter mechanics in spite of those intelligent upgrades, and when all is said and done it boils down to simple button-mashing without much originality. It's not exactly hard, either; with a very steady difficulty curve, the emphasis isn't on challenge. You only need to look at what happens when you bite the dust to see what I'm talking about; death just means that you can no longer collect coins, seeing you return as a ghost who suffers no downgrade in ability. Whilst this is brilliant for the kids, it'll leave everyone else wanting.

Secondly, Heroes weighs in heavily on the repetitive end of the scale. Every stage follows a near identical formula, and this can become wearisome quickly. From the moment you're let off the leash at the starting line you'll smash and kill everything in sight until before hitting a road-block (here named 'break-time'), which you will have to destroy in order to progress. Once you've polished that off, you're left to kill and smash some more before you come to a fork in the road. This forces you to choose one of two paths, which will lead either to a boss battle or a light-hearted mini-game. And that's it - there's rarely any deviation from this oft-repeated pattern. Adding salt to the wound, said mini-games offer a welcome break from all that familiarity but both they and the myriad bosses follow exactly the same structure come rain or shine. Once you've seen one level of Heroes, you've more or less seen them all.

Contrary to what you might suspect, the true rub of this negative landslide is that Lionhead have been so painfully conservative with their design choices. Whilst budgets and deadlines undoubtedly played their part, there's no escaping the miserable reality that it's design verges on annoyingly bland.

But wait. It's wise to take a deep breath before writing it off completely; if you manage to overlook its foibles (which is far easier than one would expect) you'll discover that it's a deceptively fun experience. 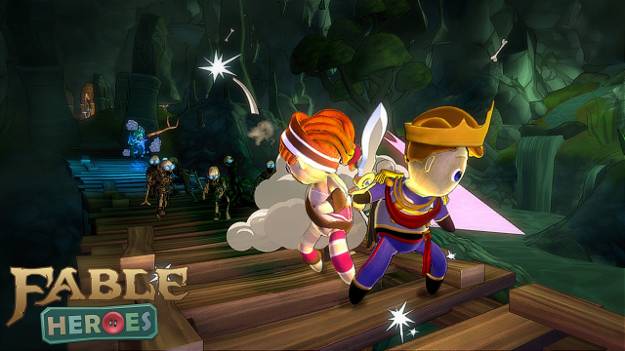 There are more reasons for this than you might give it credit for. Even if combat lacks any sort of complexity, it's satisfying in an easygoing way. There's no need for tactics or thought, and this mindless freedom is pleasantly liberating; chasing after the showers of gold coins erupting across the screen is a good laugh, made more so by the bonkers melee which dominates every level.

Treasure chests offering randomised abilities (from super-speed and invisibility to Hobbe disguises) shake things up further. Additional 'good' and 'evil' chests even give the opportunity to choose a nice or nasty surprise for a randomized team-mate. You may receive a downpour of coins, or you might end up with temporarily reversed controls. This contributes to the irrepressible chirpiness that makes Heroes so loveable in spite of its missteps.

Trumping this would be Heroes' replayability, though. The roster of puppets boasts a wide range of unique play-styles, and Dark Albion - a more testing version of the experience unlocked after you've completed the main game - adds a whole new challenge with a cranked up difficulty level and its own warped take on the standard world. The game's entire aesthetic is commendable, to be honest; child-proof as it may be, it's a hugely loveable experience which sparkles with an innocent whimsy propped up by similarly impressive production values. I'm a bit miffed that Fable's trade-mark sarcasm is away without leave (and those visuals will definitely split opinion) but players willing to see past these apparent kid-gloves will find a product with more heart than most of its Xbox LIVE equivalents put together.

That's the bottom line with Fable Heroes; it's not perfect. It's not exactly original. It's not as innovative as it could be, and there are far too many missed opportunities for me to give it a full thumbs up. Yet there are easily enough pros to make it worth a shot. And hey, you never know - you might even have a good time.