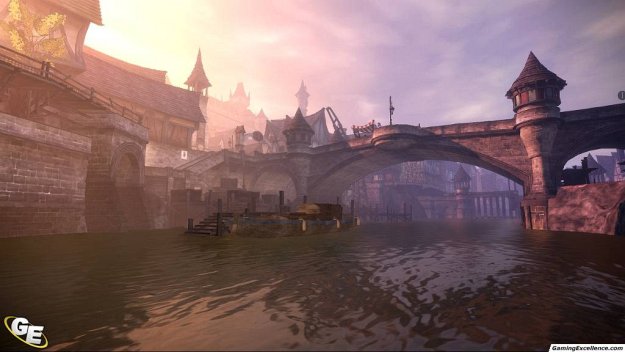 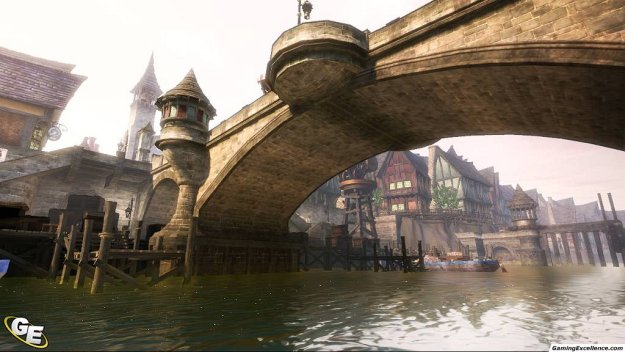 The original Fable was something of an awakening in the role-playing world, an accomplishment that spoke volumes about character customization. Gamers had seen the multitude of shining armor and Armageddon-bringing weapons they could collect in other titles within the same genre. While Fable brought the same variety to the table, it introduced something that awarded players in a different way: A personal barometer of good versus evil. And it won a multitude of awards for doing so. Now, Lionhead Studios has continued its series and expanded on this barometer with its sequel, aptly named Fable 2.

When players that enjoyed Fable first enter the world of Fable 2, they will instantly recognize the setting of Albion. But things have changed. 500 years have passed since the original game, and what was once a utopia of towns and villages has turned into a collection of large cities wrought with castles and claustrophobic establishments. You begin the game by choosing a male or female character, either of which begins as an orphan in the slums of Bowerstone. Guided by your helpful sister, Rose, you arrive at a huge crowd of people that has gathered to watch a street hawker selling everyday-looking items that he calls "magical". When he introduces a music-box as having mystical properties, Rose spurs you into collecting enough gold around town to buy the thing. Eventually, the truth of the music box is revealed and your sister is killed by a man named Lucien. He also attempts to kill you, but you are saved by a mysterious woman known as Teresa. Now, it is up to you to find Lucien and stop his plan to resurrect The Spire, a plan that finds you starting off as an adult in the early regions of the game.

This is your first chance to test the waters of Fable 2's gameplay mechanics, a collection of appearance-altering alignments that allow you to shape and mold your character into either a terrifying corrupted evildoer or a pure, saintly hero. While its predecessor utilized a good versus evil scale, Fable 2 introduces a few new variables, the most predominant being Purity versus Corruption. If you eat a lot of meat pies and drink a lot of alcohol, expect your character to become both fat and corrupt. Invest in some healthy carrots and apples, however, and your character will evolve into a lean soul as pure as spring water. There are other ways to affect your purity or corruption, such as lowering or raising prices on property you own or choosing whether or not to give in to the temptations of wandering street wenches. Whatever your decisions on the matter, be sure that your character will become strikingly different from the orphan they once were based on your decisions.

The warping effects of choosing good or evil still stand. Kill a lot of innocents and rain destruction upon Albion, and your character will become a horned freak-show complete with glowing red cracks in their skin. Fight for justice and develop your character into a being of light, and they'll become a clear-skinned cherub complete with their own halo. As you continue to grow with your alignments, you will also grow with your combat of choice. There are three distinct types of combat; strength, skill and will. Whether or not you use some or all of them will rely on your play style. If you are the type that likes to charge into oncoming enemies with a battleaxe clenched in both hands, expect to invest some upgrades in the strength department. Like to take foes out at large range with everything from crossbows to shotguns? Spend some time developing your skill ability. Finally, if you're the type that likes to call lightning and hurl fireballs at your enemies, will is the way to go. Whatever your choice, it will have an impact on the appearance of your character. Strength makes your character bulky and muscular; skill makes them taller; and every time you use will your character gains glowing blue "will lines" that crisscross along their body.

While there is no distinct leveling of your character in Fable 2, you do gain experience that comes in the form of multi-colored orbs that drop from enemies. Each of these orbs applies to a different type of combat (yellow to skill; red to will; blue to strength) and green general experience orbs apply to all of them. By combining your general experience with experience from your combat of choice, you can swiftly turn your hero into a specialized killing machine by unlocking new abilities. These include adding new combos to your strength-based fighting, allowing you to aim and zoom with your skill weapons, and unlocking more powerful magic in your will spell book. As an added bonus, you can multiply your amount of experience earned for a battle by destroying your enemies accurately and without taking damage. Do it well enough and you can earn upwards of 250% of your original experience amount, making it worthwhile to show off those flashy moves you've accumulated along your journey.

Unless you intend to run around Albion half-naked, you will need to drop some gold on clothing. The defense-increasing armor from the original Fable has been dropped to accommodate clothing that can improve some of your stats, most notably attractiveness and aggressiveness. The more attractive you are, the more likely people will give you gifts or discounts. Conversely, the more aggressive you are the more people will run away or be scared of you. Both of these have their own benefits depending on your alignment, and you should always look for the clothing with the highest attributing points in their respective categories. Also, if you are unsatisfied with the appearance of your clothing, you can buy or find colored dyes that are reusable an infinite amount of times. This is a nice change from other games in which you must repurchase a dye for each article of clothing.

The most notable addition to the Fable franchise is the pet dog that helps your hero along their journey. Not only will the animal attack fallen foes in combat, but it will also bark and lead you to treasure chests. Once you've acquired a spade, you can also follow your dog to dig spots that uncover random pieces of loot and treasure. As you progress through the game you will find separate tomes of knowledge that increase your dog's combat and treasure-hunting star rating from one all the way to five. These will increase the effectiveness of its ability to find treasure and also improve its damage done in battles. No matter what your dog's level, be careful! If your dog is injured during a fight or through a dangerous encounter with the environment, you will be required to heal it before it can return to your side. This can be done through the expressions wheel (accessed by holding the right trigger button) or via the quick-selection panel that is controlled with the directional pad. Keep in mind that you will also want to keep your faithful companion happy and loyal by showering it with love and doggy bones. Finally, be wary when choosing what path to take your hero on; whenever you change your appearance with your alignment, you also change the appearance of your canine pal. Save the day and your pet is noble and brave; hold Albion under your evil thumb and it becomes fearsome.

Journeying through Albion is a rewarding and engaging experience, as there are a ton of things to do. If you simply dedicate yourself to the main quests and don't bother with anything else, you can get through the game within 10-14 hours. While this may not seem like a lot of gameplay time, if you involve yourself with all the side quests and the multitude of opportunities the world of Albion presents, you can easily spend upwards of 60 hours before uncovering everything there is to discover. Get villagers to fall in love with you and you can marry them and raise a family. If you're struggling to make ends meet you can get a job within one of the cities. These range from woodcutting and blacksmithing to bounty hunting and relocating civilians to work camps. You can also add some funds to your account by playing the mini-games presented by Game Masters, but be careful not to get into debt as that can lead to serious trouble in Fable 2. Buying shops when the economy is low and then improving the economy is a great way to make insane amounts of gold, fast. You can also buy homes and move your family in, or simply rent them out to other civilians.

It will take many hours before your invested time in buying shops and renting out homes pays off, but when it does it pays well. Once you've made your fortune, it's time to seek out the insult-spitting gargoyles you may hear along your journey and snuff them all. Or you can travel all across Albion in search of the famed Demon Doors that will only open for those that complete their associated tasks. And when you've done all that, you can join up with another player via the co-op option for either a home-based or online game. Whoever is not the original hero will play as a Henchman, a side-along partner that can gain experience and money, but cannot buy from merchants or purchase buildings. If you become a Henchman to someone else online, you can transfer everything you earned on your Henchman to your main character in your own Fable 2 world. This is an excellent way to reward players for partnering up on Xbox Live and serving it to the denizens of Albion.

While the story of Fable 2 is the weakest link in the game, the buffet of available extra features is sure to keep you salivating for quite some time. The added functionality of the alignment system almost guarantees you will create more than one character to test out the varying appearances and reactions you can earn. There are also a ton of extra features to explore in Albion and just as many treasures to unearth, and its never looked so good. With its astonishing graphics, amazing musical score, and re-playable gameplay that is sure to keep fans creating new characters left and right, Fable 2 will stand strong until the next addition to the franchise. There is already word of a downloadable expansion that will introduce a new area to Albion. Could this be the start of a maneuver that will never see another Fable title but an ever-evolving world that will come in the form of downloadable patches and expansions? Only time will tell. For now, just give Albion something to remember you by.