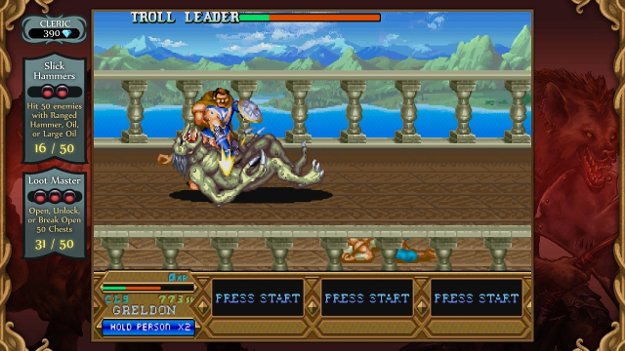 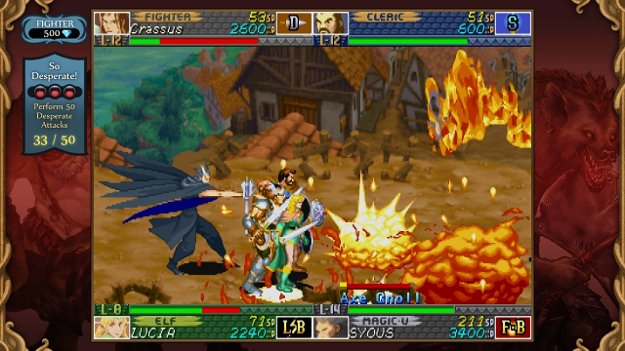 Many moons ago, back in the long forgotten nineties I spent an unreasonable amount of time in the arcades. Since we couldn't afford to buy video games most of the time it was easier to just hit up the nearby arcades and see what I could get with my meager dollars. Almost invariably it ended up being a Capcom title. If it wasn't one of the many versions of Street Fighter II it was Final Fight, Captain Commando or Knights of the Round. Why yes I was in love with the side-scrolling beat-em-up genre.

But the one game more than any others ended up devouring my quarters faster than any other: Shadows Over Mystara. I literally could not stop playing it and was obsessed with clearing the game with my Thief. When it become impossible to find the arcade cabinet anywhere nearby I was literally more sad than when my Super Nintendo died on me. Luckily for me the game has been brought to home consoles for the first time in North America and it is absolutely amazing. 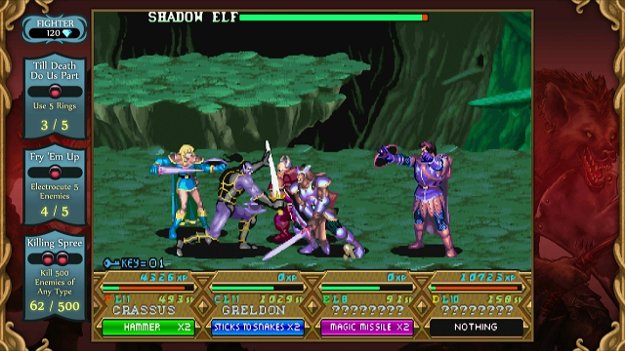 There's a story here but it's not the most well developed or important. Tower of Doom sees the heroes on their first adventure, trekking across the land to the mysterious Sable Tower to stop the crazed Lich, Deimos. The sequel, Shadows Over Mystara, sees those same heroes (plus two new companions) attempting to stop Deimos' master, the fearsome warlord named Synn. Who is also a gigantic red dragon. Who cares about that though, there's a whole slew of enemies out there who aren't going to murder themselves so get hacking!

What made these games so memorable back in the day was a mixture of their tight controls and the huge plethora of options presented to you. Luckily these have translated incredibly well to the console especially if you're used to using the d-pad to control games like this. Well unless you're on an Xbox of course but you already expected that disclaimer. You'll be running, leaping and performing a variety of special attacks with ease. With each character having a unique set of moves to learn how to perform, when to make use of them and how to evade enemy attacks.

More impressive than just that is the wide variety of items and spells to use. Fighters, Thieves and the Dwarf can use a variety of weapons like throwing daggers, thrown hammers, vials of burning oil and magical rings.  Magic Users can use the same but also have a number of wands they can use to enhance their spell casting. More importantly they gain a wide variety of spells that do a wide variety of effects, mostly centered around dealing a wide variety of elemental damage. You'll even find a huge variety of other weapons you can pick up and equip in place of your primary weapon. The fighter can even dual wield if he finds a short sword which is pretty awesome.

In the arcades you could have four people playing alongside you but this rarely happened. The only times I was able to do it was when I brought my brothers with me and convinced them to help me while someone else was about to start playing. Those times were amazing and this translates well into the home version of the game. Xbox Live and the PSN really enhance the gaming experience here since there's very little difficulty in finding others to play alongside you. This does make the game harder as it adjusts the difficulty upwards for each player. But if you can get a group of people willing to work together the game gets amazingly awesome as you just destroy the enemies in coordinated use of abilities and spells. 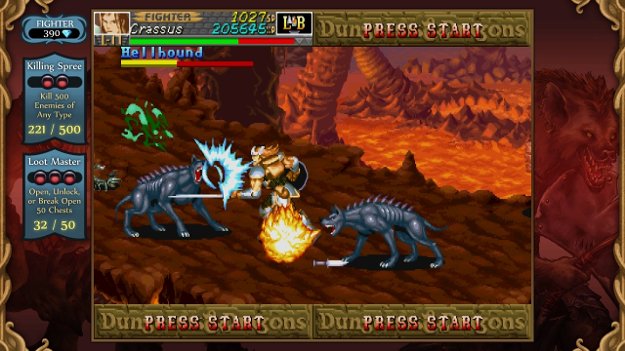 Another interesting aspect to both of these titles is how large the game world is. Many of the areas you will explore will give you a choice of how you wish to proceed after you clear them. Each level you explore has its own hidden treasures and secret areas containing a wide variety of treasure that requires a good bit of exploring to find. But learning what path will get you through the game with the best equipment possible is party of the fun, learning experience that makes up this game.

Even better than this are the unlockables that the developers have added to this experience. As you complete challenges (such as Polymorphing enemies or paralyzing them) you'll earn points that are spent in the in-game vault. These can either be spent on concept art, images of promotional materials or house rules. The concept art is really lame as much of it is just images taken from various Dungeons and Dragons supplements like the Monster Manual or seemingly from book covers. But the real beauty here is the house rules as these make the game infinitely more interesting. You can unlock the ability to heal by inflicting damage, a mode where you use your gold as your hit points or a time attack mode where you gain time by killing enemies. Probably one of the best unlockables is the mode where it strips away your normally infinite continues. Pairing this up with the rare instant death attacks and the game goes from rather easy to impossibly challenging until you really learn how to play.

If there's a weakness in this package it's the first game, Tower of Doom. While Shadows Over Mystara is still absolutely amazing Tower of Doom has just not aged very well. The special abilities are hard to perform, lining up attacks is tricky, selecting what item or ability to use is intensely clunky and the enemies have rather cheap attacks. It's still nice to have it and playing a character in the first game, clearing it and then continuing in the second really gives you the feeling of going from start to finish with the same character. The inventory issue does hit the magic user, cleric and elf in the sequel but it's nowhere near as big of an issue there as it is in Tower of Doom.

Honestly this is one of my favorite games brought to the home consoles so why wouldn't I love it? But if you're a fan of hack and slash games in general or Capcom beat-em-ups in particular then there's absolutely no reason you shouldn't own this. There's great replay value here for what you pay. Pair this up with Guardian Heroes and you'll have a fun filled, retro weekend waiting for you.