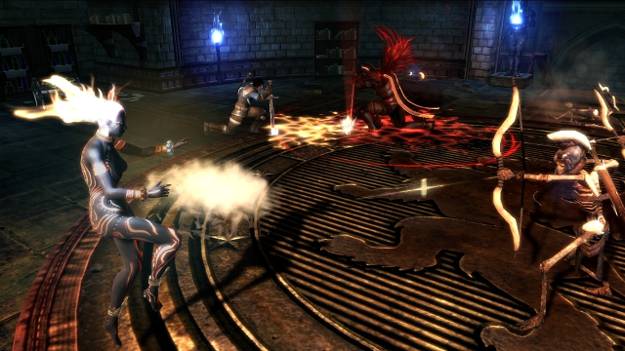 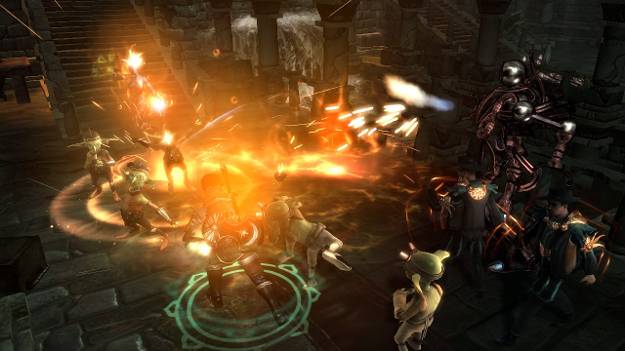 I got the chance to talk to the developer of Dungeon Siege 3, Square Enix's first foray into the world of genuine western RPGs. When they first looked to make a Dungeon Siege game, they approached Gas Powered Games for it, but the developer didn't have a team ready for the game. So, SquareEnix went to Obsidian Entertainment to develop the title. Despite the move to consoles, the demoer stressed that this wasn't a port, but developed concurrently across all systems (PC, PS3, and Xbox 360).

The demo started with a character running through a small dungeon, through a dark forest and cave. The hero, a tank-type character known as a Guardian, was a member of the Kingdom of Ehb's 10th legion. The classes were explained to be designed to fit different roles in different situations, with little overlap between them. Each of the classes have their unique abilities, as well as two different combat stances to fight with. For example, the Guardian class can wield either a sword and shield combo, or a large two-handed weapon.

Obsidian has tried to create a much better experience with Dungeon Siege 3 in a variety of ways, while keeping a lot of the past good points of the series. First, there are no loading screens between areas, including indoor to outdoor transitions. The quest system has also been overhauled to make the game a much more non-linear experience, using a breadcrumb experience to guide you to your quest goals. Dialogue also makes an appearance, but just like in the previous titles, it's not a big part of the game, used just for personality and key choices in the game.

What I liked to see (as with most titles), is the inclusion of co-op, though it is certainly a staple of the franchise. The game features a number of ways to get co-op gameplay going. The first is simply starting a game with another player already near your side, fully customized. Alternatively, as you play the game, sometimes AI characters will join your quest. A second player can jump in whenever they want to take a part in the game.

Much of the game has been designed with co-op in mind. For example, the many abilities of the characters can be used to work together, like the Guardian's ability to stun enemies and the Archon (a primarily melee class) and her ability to bring a strike down from the air after a brief delay. Then there's the shared inventory. Dying just means having the other player run to your lifeless/unconscious body and reviving them (the developers even promised that the AI-controlled characters will revive you if you go down).

Slated for release in early 2011, Dungeon Siege 3 will hopefully appeal to the fans of the older titles. It's got a lot of changes to it, but Obsidian has tried to keep as much of the originals' charm and feel in there as it can, even with some of the art design and assets (updated, of course). Whether or not it keeps the same appeal will certainly be seen.