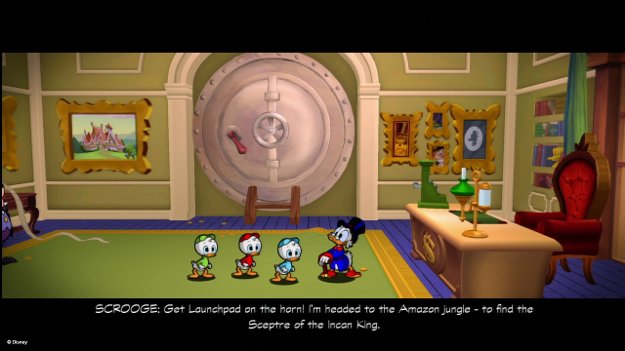 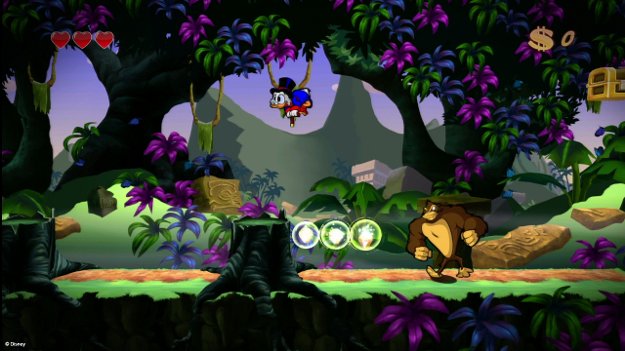 DuckTales: Remastered is nothing more and nothing less than a lovely nostalgic piece for those who remember the glory days of gaming, when beating a game meant spending hours memorizing the layout of the level, the patterns of the enemies and the locations of the pickups.  It’s also a wonderful piece for those who remember watching DuckTales, TaleSpin, Darkwing Duck, Chip ‘n Dale Rescue Rangers or any of the other Disney cartoons. Now for all of you mature enough to have been around to watch them, quick, tell me which of those theme songs just got stuck in your head?

The animation has been updated nicely, giving it a look much more akin to the actual cartoon.  It’s nice to be able to watch old Scrooge and his nephews running around as nicely drawn animations and not in their pixelated forms. I did get a little annoyed at the animations constantly being repeated and I was hoping for a few new ones to get thrown in, but the ones that were in the game were well done.  And the game did an awesome job of getting back most of the original cast to reprise their voices.  As soon as Scrooge opens his mouth, it’s like watching the cartoon again and it’s absolutely awesome to feel like a kid on Saturday morning again.  And the most awesome thing about the game is that you get to jump in the money bin.  That’s right, straight in!  And as you adventure through the game and the money in the bin increases, the jump gets shorter, but oh it’s nice to swim through that gold! 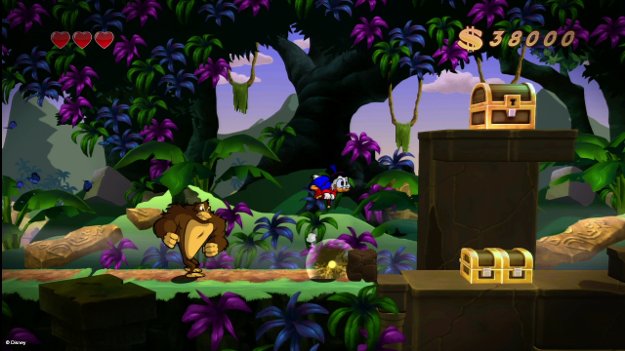 On to the bad part of the game, the part that made playing it troublesome.  The enemies in the game have this nasty habit of respawning. Over and over again, no matter how determinedly you jump on their heads with your little cane.  They just won’t stay dead and it’s rather annoying to have to deal with another enemy just as quickly as you’ve dealt with one. Also, there’s a great deal of difficulty in grabbing onto the vines and ropes.  I seemed to never be able to grab onto them consistently unless I used the cane and it was incredibly annoying.  It lead to a great deal of unnecessary damage and death.

The game itself is also quite difficult.  You start with three hearts of health and two lives.  Loose them all and you’re done.  The easy difficulty cuts your damage in half and gives you infinite lives, but to be honest, that’s not the way that any game is meant to be played. Normal should be the starting point and default of any game experience; playing it the way it was meant to be with all the difficulty that entails.  Now I know that some people out there are going to put on the game, die completely in the first stage and never make it any further.  However, there is absolutely nothing wrong with the game being this difficult.

This game is simply a remastering of an old school video game.  The most significant changes are the graphics.  Other than that, the game is hard as balls. Any game from that era is hard as balls.  I have to admit, playing it and dying repeatedly gave me pause.  Have I really gotten that soft playing modern video games, with the saves and regenerating health, that an old school game could bring me to my knees? The answer is yes, absolutely, without any shame for my tears of frustration, yes.  But if you can’t handle that kind of difficulty, either put it on easy or don’t even bother.

Anyone who grew up with the first few generations of video games knows exactly how difficult these games are going to be.  Constantly dying, restarting and trying to memorize the stages is part of the experience.  And if playing this game doesn’t give you that same old school gaming experience, then there’s only two explanations. One, you are a soulless android, in which case please take me to your maker so I can gain your lightning fast reflexes.  There are a couple of games I’d like to try playing on hard. 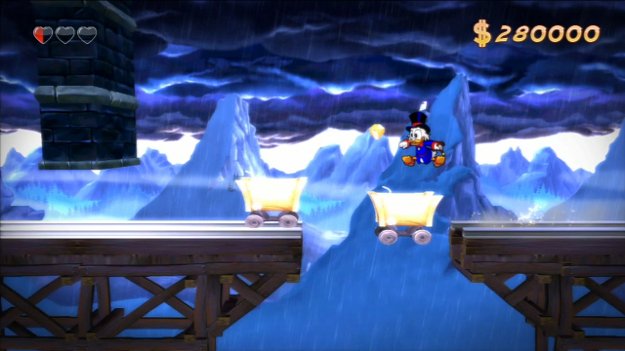 The second explanation is that you’ve spent the last twenty years with your Genesis, Nintendo or other similar console plugged into your non HD television and you’ve been playing away.  The kind of fortitude you’d have to develop means that you’re spending at least 12 hours a day practicing on all the old, hard games that limit your lives and prevent you from saving.  This also means, of necessity, that you don’t have a job or you’re independently wealthy.  In which case, take me to your mother’s basement; I will marry you and bring you Funions and Code Red Mountain Dew as much as you want. Only if you’re independently wealthy, though.

DuckTales Remastered is a great game.  Worth playing, worth keeping around and certainly worth the hassle.  Especially for those who remember the old Disney cartoons or remember playing the old games.  If you don’t remember either, well then you’re just too young to be playing this game. Now get off my lawn and keep your damned newfangled electronics to yourselves.  Damn kids.