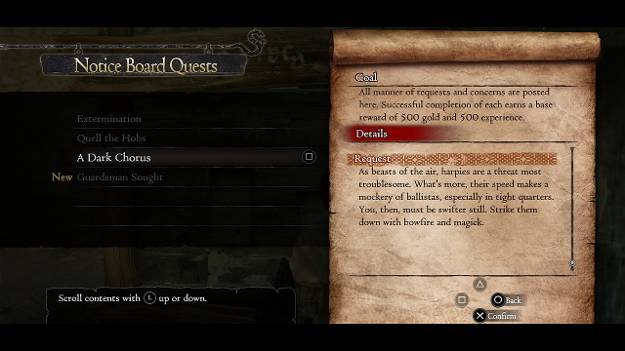 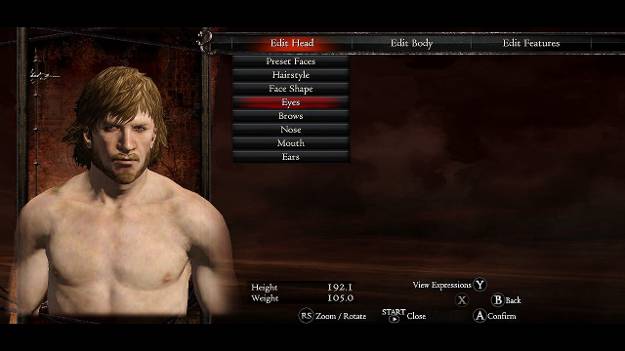 As I left the city, I saw a shadow zoom across my party. Looking up, I had enough time to dodge out of the way as a gryphon five times the size of a man slammed into the ground, knocking my party aside. I did the only thing that was logical at the time: I set myself on fire, dived onto the gryphon, and started hacking away at it as it feebly tried to get away. Some bandits joined the fray at some point. Welcome to Dragon's Dogma.

Dragon's Dogma is a game about scale. The world is large, the enemies are huge, and you are just one man. An action-RPG, you'll find yourself scouring the world to solve quests, aid others, and defeat the dragon who has stolen your heart, marking you as the 'Arisen'. To do this, you'll fight monsters many times your size, very often.

Class selection run the gamut of the typical archetypes seen in fantasy: vocations are typically based around strength, speed, and magic (or, as the game refers to it, magick). Later you get access to more powerful versions of the starter vocations and, more interestingly, hybrids like the magick archer - a combination of the speedy strider and magickal mage - or assassin - combination of the strider and burly fighter. Skills can be bought for each class, and while some skills are good for each vocation, most are vocation-specific, making the choice of profession important, even with the ability to switch between them at will. 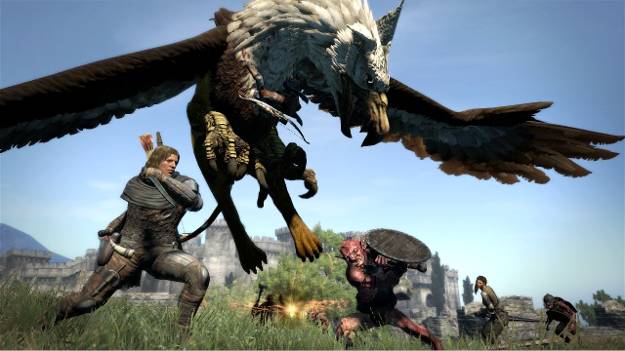 The beastiary runs the gamut of fantasy creatures and monsters, ranging from wyrms and gryphons to cockatrices and chimeras to cyclopses and ogres, and many, more. Each monster fights with their own set of moves, and each monster has different strategies to take them down. Chop of the chimera's heads before taking it down, for example, and you won't have to worry about a spellcasting goat's head or an attacking snake; hit the cyclops in the eye and blind it for a few moments, or hit it with thunder to leave it reeling; rupture the cockatrice's gland to prevent it from petrifying you; every battle has a way of getting by without having to resort to simply doing lots and lots of damage in a repetitive battle.

The crux of the battle system is the ability to latch on your enemies. While some are too small to do this to (goblins and wolves, for example, will simply see you grappling them and holding them prone if you try to grab them), any enemy larger that you, including cows, can be grabbed onto, letting you get closer to their weakpoint or simply stay out of the way of their attacks. And then you can simply hack away. You know how quickly a cyclops goes down when you're constantly stabbing it in the eye? Quickly. Though it can sometimes be a little hard to control which direction you're climbing in, this mechanic adds a surprising amount of depth to the game, allowing you to strategize the best way to take down a monster without resorting to hacking away at its ankles until it falls down.

The pawn system is what passes for a multiplayer in the game. You get to create a pawn - a AI-controlled follower that fights on your side - and have upload them to a server. From there, other players can download your pawn and have it fight with them, as you can also download up to two pawns to have a full party of four. The party system is a nice touch, though it is a poor excuse for having someone fight by your side. The big problem with the system, however, is that there's no real way to control your party members. You can tell them to come, to go, or to help, but that is literally it. There's no way to direct them to a particular location, to use a particular skill, or to stay out of the way of the wyrm that's about to - well now they're on fire and dead. Fantastic. At least reviving them is simple. 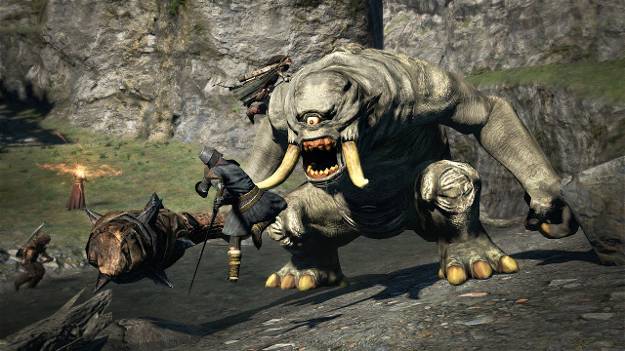 The game has a lot of strange quirks that may turn players off from playing. For example, there's a sytem of fast-travel in the game, but it needs to be earned - finding extremely rare waystones and placing them in the large world where you'd like to be able to teleport. Or there's the interface, which is at best manageable. Or how there are numerous quests that are vague and don't give actual hotspots on the map to investigate, forcing you to search all over the place to find a snakeskin purse, or something of the sort. And that's not even mentioning the dodgy save system, which may see you losing a lot of time just because you haven't saved since you left town. Frankly, it's common to find yourself scratching your head and wondering why the developers decided to do what they did.

Still, the game does a lot of things right. The world of Gransys really comes to life as you travel through it, harvesting herbs, defending yourself from local wildlife, or simply walking from point A to point B. And if Dragon's Dogma does anything right, it's the ability to truly make you worry about going out at night. With only the halo of light around your lantern visible, anything can come in from the darkness when you're least expecting it.

For all of its flaws, Dragon's Dogma still manages to create a compelling experience that is really unlike anything else. When you want to fight large creatures, climb over their faces while stabbing repeatedly, or scour a large world for things to destroy and items to grab, it's hard to find any other alternative. It's just good to realize that the game is not without its fair share of problems, but if you're willing to put up with those then Dragon's Dogma is definitely worth playing.