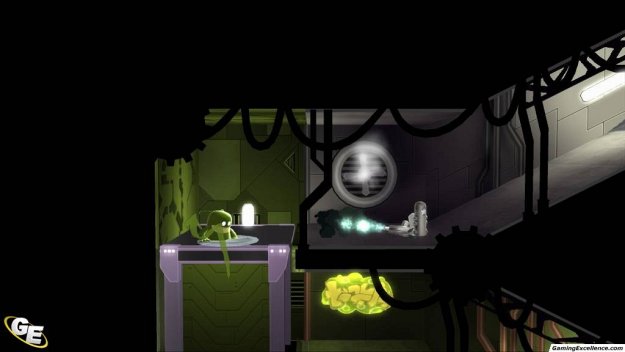 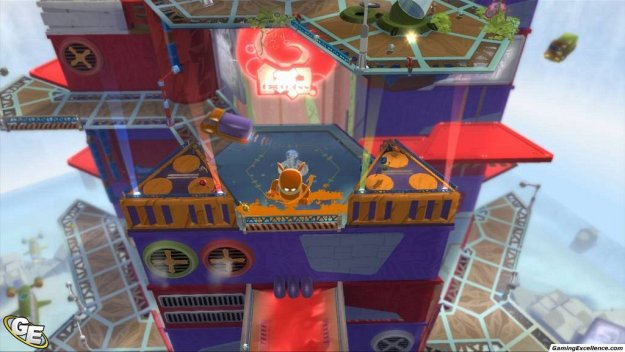 de Blob is kind of a weird game. We're not talking about the basic premise which is simple enough. You control a sentient blob that can soak up paint and bring color to an otherwise completely colorless land. Essentially you're committing cheerful terrorist acts to free the oppressed people of this colorless land. No, what's so weird is that the game alternates between being childishly charming and almost aggravatingly difficult.

In the original Wii exclusive a lot of this difficulty was due to the motion controls which, while not badly done, complicated matters just enough to really screw you up at the worst of times. But the level design in this game is so deceptively simple that the game is an absolute terror if you aren't incredibly patient and navigating carefully. But the core of the gameplay has been much tightened up since the last game, making the process of playing this game much less hair pulling.

Of course some of this is probably helped by the fact that the game is being released on the Xbox 360 and PS3. For those of us that just aren't very good at using the motion controls this comes as quite the blessing although there are sure to be Wii fans (if those still exist) that will cry foul at the loss of a console exclusive. The non-Wii versions are quite responsive thanks to all the actions being mapped to controller inputs allowing for rapid, easy movement around the levels although we weren't able to test out a Wii controlled version of the title sadly.

Everything has improved in de Blob 2 over the first one. The missions are more expansive, the game is more challenging and there are varied obstacles to deal with. With the painting being just as engaging as in the previous title this is more or less a must own for anyone who was a fan of the previous entry.

Climbing the various towers in the demo while defeating the "cops" that were trying to stop us, avoiding the water (which washes away all of your paint) and trying to not accidentally break barrels containing black paint (which undoes your hard work) was quite the enjoyable little trial. The time limit is a pressing concern but not so much so that it feels oppressive, providing an impetus to move quickly but not punishing you if you fall short of perfection. Even when being forced to dodge water and enemies while mixing paints the objectives never become so obscure that you can't suss out what you're supposed to be doing.

Look for de Blob 2 to hit store shelves rather soon, splattering all over the place this February in all regions. Prepare to paint, smash and crash your way across the landscape when this title hits all major consoles, including the Nintendo DS.