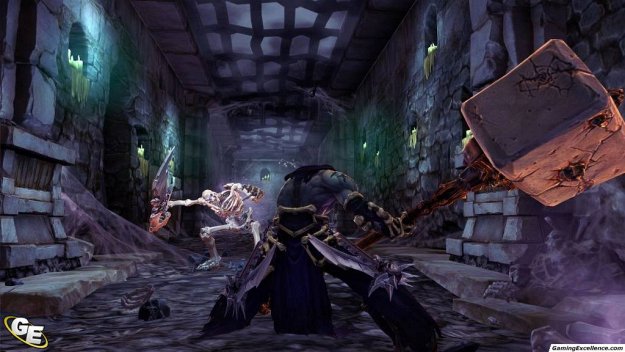 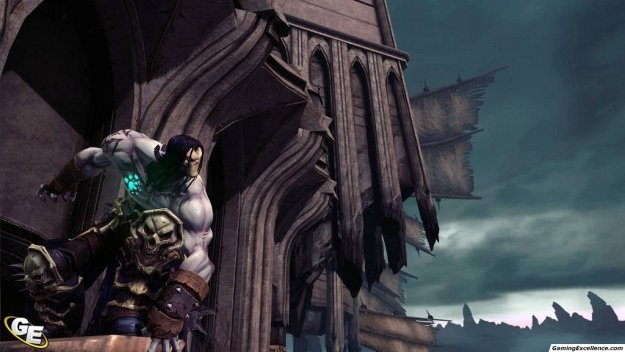 With all the coverage we at GamingExcellence have given to Darksiders II you just had to know that we were chomping at the bit to play this game. Considering the fact that we absolutely were fans of the first title it's not surprising that we would take such an interest in the sequel. Now that it's been released for public consumption, what exactly is the verdict? It's freaking awesome is what the verdict is. Oh sure, there are a few hiccups but overall this is a great game to say nothing of it being an improvement over the original game in just about every way possible.

The first Darksiders game told us the story of War's redemption. Accused of starting the apocalypse before the seventh seal was broken, War is blamed for humanity being annihilated in the fighting between the angels and demons. Darksiders II picks up on this plot thread and runs concurrently with the first game. Death has embarked upon a quest to cleanse his brother's name or, barring that, restoring humanity to life so that War cannot be blamed for their destruction. While War explored the ruined Earth to seek his vindication Death will explore various realms, starting in the realm of the Makers although the journey will even travel to the realms of angels and demons. 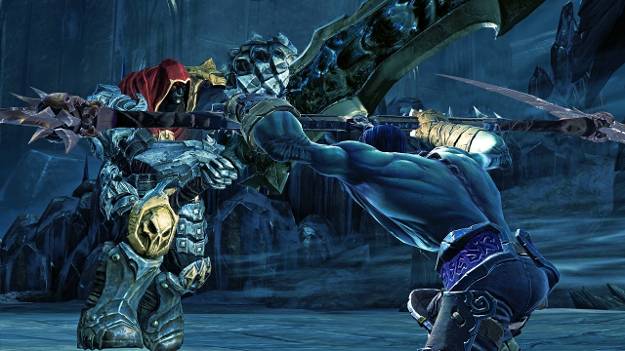 While Death's story may be much farther reaching than War's, Darksiders II is still a very familiar game. Numerous new features have been added but there are also a lot of familiar ones. Notably the game controls almost exactly identically to the first one although some very minor tweaks have been made to how it works, especially in making the controls much, much more responsive. But then again many of the tools that Death acquires are incredibly familiar to tools that War acquired in the first. On the other hand tweaks have been made to how almost all of them operate. In a lot of ways that's a pretty easy way to sum up the game – kind of like the first one but different.

This may sound like detractions but it honestly isn't meant to be. In a way this is a nice thing as the game will feel quite familiar but not enough so that it feels like playing the exact same game again. Where War clambered somewhat clumsily over the terrain as he platformed Death moves with fluid grace and agility. While the controls are very familiar the glaring omission of a block button changes the way you approach combat immensely. Whether because he lacks War's giant metal arm or just plain snobbery Death refuses to let his foes touch him if he can help it and as such every fight will consist of lot of expertly timed dodges. Or dying.

Actually there's a lot of that if you aren't the best with timed dodges so keep a lot of healing potions handy at all times. Well you should keep plenty of potions on hand anyways as the enemies are quite persistently destructive in this title. Even minor enemies can inflict staggering amounts of damage in a short time if you aren't careful so you'll always need to be on your toes as well as ready to heal at a moment's notice.

In addition to similar controls you'll also find that there are a number of tools that feel similar to the first game. Notably Death ends up with Strife's second pistol but he also gets a Voidwalker like his brother and a spectral hand ability that acts like the Abyssal Chain. Unlike the Abyssal Chain Death uses the Death Grip while running up walls, across platforms or just plain leaping across a pit. It further expands his ability to platform across large gaps creating some intense looking but frustration free platforming segments. 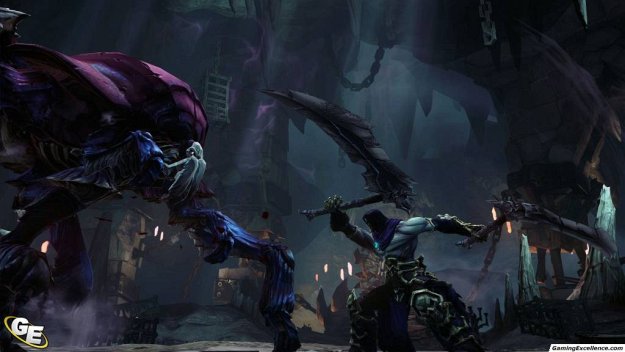 This however is a bit of a problem with how the game has been designed. When we first previewed it the platforming was very awkward, requiring oddly timed button presses to keep moving. So when running up a wall you'd press the button to jump and start the wall run, then press the jump button again when you reached a peg, press it again when you reached the second peg, used Death Grip to platform further and then press jump again to leap off the wall. But now it just does it all automatically. You start the wall run, maybe use Death Grip a few times and then jump off. That's it. It's less complicated than the overly simplistic platforming in the Prince of Persia reboot which was already ludicrously easy.

While the platforming is beyond easy the combat is "Oh my god, my eyes, they got me in my eyes!" difficult. Minor enemies can wreck you with high damage output or they can tear you apart with sheer numbers but if you're smart they're kind of easy. The problem is the damn bosses. Some of these bosses honestly wouldn't be out of place in Dark Souls thanks to their ability to flat out kill you in one or two hits if you make a single mistake.

The side quest bosses are notorious for this as they can be encountered when you're far too low level to be fighting them. Notable amongst this is the Deposed King, a quest you can pick up at around level 4. You won't reach him until you're about level 12 or so but he's actually a level 20 enemy. Even if you're level 15 he can still flat out kill you in one hit and this comes a bit too easily since his attacks are overpowered. His attacks actually seem to hurt you even if you're outside of the visible radius of these attacks which is incredibly frustrating. He's not the only boss with what seems to be a hit-box issue but he's probably the most glaring one.

On the flip side some of the other boss fights are both incredibly tense and entertaining. The first major boss fight is kind of frustrating until you figure out what to do but once you have the idea it's a blast just dismantling the guy. In addition later on you will battle what amounts to a weird Cthulu demo and the fight just gets massively out of hand with his immensely damaging attacks as his flunkies try to mass swarm you.

Even better than the boss fights is the loot system. Almost like playing Diablo or Borderlands you'll find randomized loot as you kill enemies and bust open treasure chests. Gathering loot is incredibly addicting in almost any game and this is no different. While the majority of the loot that you'll find isn't anything special occasionally you'll find something really good, perhaps even a Legendary weapon or two hidden in the world. But if that doesn't happen you'll hopefully find a few of the powerful Possessed Weapons. You feed some of your other equipment to these items and they grow in power until they are some of the strongest weapons you can find for your level range. 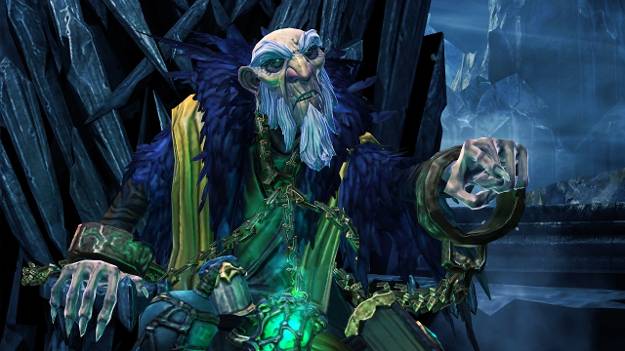 Perhaps this all wouldn't be quite so enamoring to me if it wasn't for the games design which is just utter top notch quality. The graphics are sharp and while they aren't the greatest on the console the game runs butter smooth at almost all times. Watching the chaos of battle against an immense corrupted golem with the beautiful backdrop of vibrantly colored hilly woodlands is just awe inspiring. Paired up with the excellent voice acting all around and top notch sound design the whole experience can really suck you in if you let it. Death is much easier to empathize with than War thanks to him having a goal more understandable to the average person and the voice acting really helps sell the character.

Unfortunately all is not roses and scythes in the land of Death. The camera is still a huge problem much as it often is in third person hack-and-slash games. This is doubly true in missions where you'll fight much larger enemies who rush you down. Enemies who do this appear near the beginning of the game and they keep on coming, getting bigger and deadlier as the game goes on. They will attack relentlessly, push you into a corner and then hammer on you while you can't even tell which way is up and which way is down making evasion impossible.

Many of the games issues come together in what is the worst level of the entire game, a late game visit to the ruined Earth. This level turns into something of a third person shooter with non-stop hordes of enemies constantly charging at you, exploding enemies from the first game rushing your face and a humongous enemy called The Suffering that is near impossible to kill in head up combat. You'll need to carry either an angel or demons gun to chew through the enemies. But since you're stuck with having a crappy camera to complicate an immensely hard level full of non-stop enemy assaults due to the tight corridors and some very difficult mini-boss fights this level just becomes immensely aggravating.

But these problems really don't detract from the whole experience. The loot system is addictive, the gameplay is simple but fun, the storyline is interesting and the whole package just comes together wonderfully. It's not much of a stretch for me to say that this is one of my favorite games released this year and, while not perfect, this is a fantastic experience for any fan of action games.