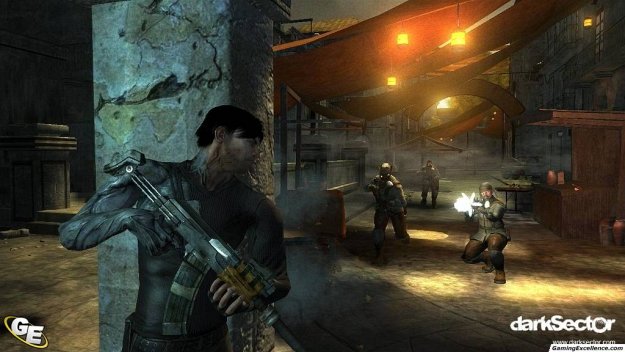 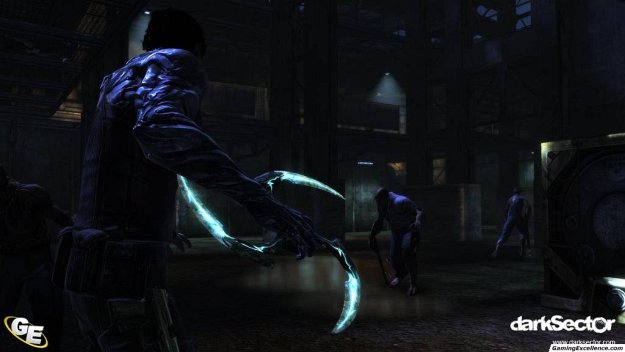 Wasn't this game supposed to have come out a few years ago? There's a very clear memory of it having been announced as some sort of next-gen space action adventure type game. Many things have changed since the game was first announced; a futuristic sci-fi setting gave way to a game set in a modern day eastern bloc country. It's a rather strange leap to make but it seems to have been for the best. Dark Sector is at its best when it's taking things that seem familiar and then turning them on their ear with the alien creatures infesting the land and bizarre powers at your disposal.

All the smaller details aside you can basically consider Dark Sector to be a superhero origin story for the main character, Hayden Tenno. It has all the hallmarks of a good superhero comic. The hero starts off as a immoral government hitman, finds strange and alien powers growing within himself that drive other people insane and mutate them horribly but within it he finds redemption. The story is a fairly powerful one in that most primal of ways but it suffers from a number of problems the least of which is how tried and true it sticks to this same-old, same-old formula.

One of the first things you will notice is just how "inspired" by other games Dark Sector is. The game itself looks and feels very much like Resident Evil 4, down to the somewhat chunky movement and context sensitive commands. The big difference is a cover system very similar to the one found in Gears of War. The problem here isn't that these systems feel familiar but is instead that they're not enhanced any and actually feel like a backward step.

In Resident Evil 4 Leons movements might have been a bit stiff when turning but his ability to turn 180 degrees was a life send. Dark Sector doesn't have this so when you have to retreat things can get a bit hairy and hard to maneuver. In Gears of War part of the ease in maneuvering was that all actions, such as taking cover and hopping over said cover, are linked to one button. This lets rapid button presses move you quickly across the battlefield. In Dark Sector you will find yourself having to bounce between two buttons and constantly force Hayden to restick to cover. These problems aren't prolific or game breakers but it shows a lack of progress forward in the area of game controls.

Where the game excels is in the use of the main focus of Dark Sector; the Glaive. Given to you at the beginning of the second stage this is Haydens' trademark weapon and it is incredibly versatile. When you first get it all it will be good for is throwing it at foes but little else. Over time it gains a number of abilities, from being able to retrieve items for you, to power throws and even being infused with elemental energies to set foes aflame, freeze them or electrocute them. Lighting your Glaive in a bonfire, setting a foe on fire, relighting the Glaive as the enemy burns to death and using it to burn down other foes never gets old.

However the most important, and often used, upgrade you will acquire is the Aftertouch skill. This lets you guide your Glaive after you have thrown it allowing you to slip it behind cover, through gaps and even take off specific parts of the enemies' body. It's pretty fun to use although it does start to get a bit old as the game wears on. About two-thirds through the game you will have seen all that it has to offer and it doesn't get much more interesting from there. The other skills that you gain (temporary invisibility and a barrier that reflects ranged attacks) aren't nearly as interesting and they are more often used in hamfisted ways of solving puzzles.

The game is fairly short though, hinging around the eight hour mark, so you likely won't get sick of the Glaive in one run through. The problem with this is that there isn't much to do on a replay through. Sure you can try on the harder difficulty but that's not all too interesting. The online Multiplayer doesn't help since it's basically two different modes of deathmatch, neither of which is going to hold your attention for very long. You would expect more from the guys who worked so much on the multiplayer focused Unreal series of games.

While definitely not the best looking game on the next-gen consoles Dark Sector looks quite good, especially when viewed in HD. If you didn't know better you would swear you were viewing yet another game powered by the Unreal engine and not one developed in house by Digital Extremes, something that speaks highly of the quality of their work. The few gripes with the graphics is that the lipsyching is usually pretty poor and there are plenty of graphical glitches. Enemies will fall or phase through walls and objects and some enemies can even aim their guns through solid objects, firing at you through dumpsters while remaining impossible to hurt.

Audio doesn't fare as well mostly due to the volume issues that pervade this game. Background noise is always fairly high while dialogue is much lower. Changing settings doesn't seem to help it so you end up missing some of the dialogue due to sudden background sounds and such. Other than that the sound is mostly okay, minimalistic music mixes with a poorly acted main character. Michael Rosenbaum, Lex Luthor from Smallville and voice of the Flash from Justice League, really seems bored and like he's phoning in this role which is a shame.

Probably one of the biggest issues with Dark Sector is that of cheap deaths. Typically you will be fighting large groups of enemies with plenty of cover to use to defeat them. However the enemies have quite a love for grenades and one well placed grenade can take you out. They're much more accurate and have better range than you so you will find yourself dying to this fairly often. This and a few mutants in the game have ways of one-shot killing you. In this fashion the game feels almost archaic, killing the player rather arbitrarily. You never feel like you learned something from the deaths, they simply feel cheap.

Overall Dark Sector is a good investment if you're just looking for some good mostly mindless fun. The action is intense and the game itself controls wonderfully most of the time. It's a good bit of fun, especially once you learn how to control his other abilities. If you can deal with dying fairly often to cheap shots and the plethora of grenades enemies love to fling your way then you will find an experience that is just begging for a sequel.