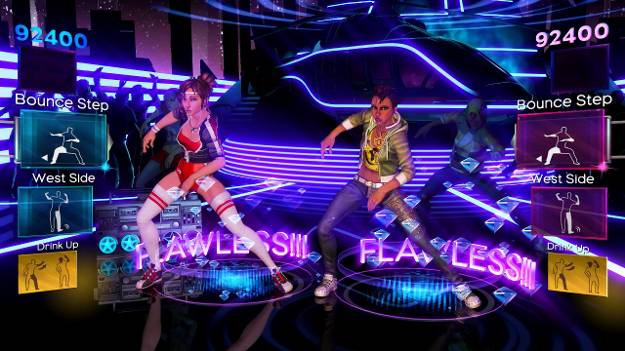 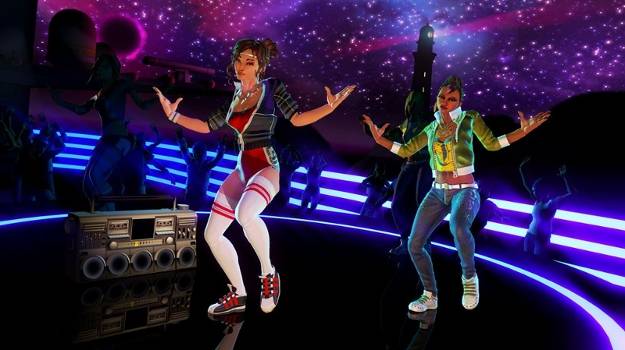 A big hit since the moment dancers experienced it on the Kinect, it was inevitable that a second installment of Dance Central would appear. Dance Central 2 is a great example of taking what's already an amazing game, and somehow making it even better.

From the beginning DC2 offers tutorials on how to play the game for a quick refresher and to teach the new DC players how things work. The avatars from the first DC are back, and they each have a dance partner that makes up their "dance crew" in the game. Some un-lockable characters are available as well, once you earn them of course.

The songs are more diverse, with "Dragostea Din Tei" by O-Zone (also known as the "Numa Numa" song) as a beginner song, and "old school" hits like Montell Jordan's "This Is How We Do It" and Haddaway's "What is Love?" mixed with more-recent hits by artists such as Rihanna and Far East Movement.

On the song selection screen not only do you get to hear an excerpt from the song you've highlighted, you can also see a preview of the choreography to get an idea of what's in store. It's a great way to navigate when you're deciding what you're in the mood for.

Happily all the new songs have non-stop play-through, so if you decide to disable the "free-style" mode, you don't have to wait to continue dancing; it's seamless. Unfortunately, older downloadable game content and the original DC song-list don't have this feature integrated, so you still have to wait through a free-style when you play those.

Work-out Mode returns, with the game actually saving whether you turn it on or off so you don't have to select it every time you play. Work-outs of varying difficulties are offered, with easy song sets and difficult ones mixed together into a pre-determined length of time, or you can turn the setting on and play whatever songs to your liking.
A "story-mode" of sorts is available to add some variety, where you play as a particular dance crew and dance songs on their song-list, earning stars to "level up." More dance crews unlock as you go.

Before playing a song you can choose to dance on your own or with a friend. Each player can then choose their level of difficulty, as well as the avatar they wish to be. The game registers the movements of both players really well, while dancing cue cards for either player are shown on opposite sides of the screen. The jump-in feature, where someone raises their hand during player one's dancing and is brought into the game as player two, works well, but it automatically chooses player one's difficulty which can be bothersome for an "Easy Mode" player trying to dance alongside an expert.
Dance battles are as fun as ever. As both players play, one person is given dance moves to dance, then the other, then both simultaneously. The dance-offs, which occur a few times during a song, have you choose one of several moves shown on-screen and be the first to execute it properly to get the points.

When breaking down a song to learn how to execute moves, you're now able to pick and choose which moves you want to focus on instead of having to play the whole breakdown over and over again. If you don't get the move and the game progresses with the next move, you can go back to the previous move and practice it some more. Should you have problems with a move, you can slow it down and observe/mimic at that speed, then speed it up when you're ready. The most helpful of all is the record video feature. Once you request it, this records you when you execute a move, plays it back to show you how you look, then has your video and the avatar dancing side-by-side so you can see how your moves compare; by far the best way to learn what you're doing right and wrong.

However, choosing to work on a previous move before the game has started you on the next one will have you backtrack by two moves, skipping the one you wanted to work on. I also noticed when I wanted to work on a previous move, and it was the last in my sequence list, by requesting "Xbox previous" the music continued yet the visuals completely froze; I unfortunately had to restart the game because of this.

The Kinect voice commands are great for the most-part, however, it's hard to effectively integrate them into a game which is most likely on high-volume whenever played. During "break it down" with the volume up, the Kinect voice kept getting confused and would assume I'd said something during a dance. Suddenly it would start recording me, or pause the game, or do something I didn't ask it to do. The easy fix is to keep the volume down during practice. Luckily, this doesn't affect the regular dance mode.
A nice extra for DC fans is the ability to import all the songs from your copy of Dance Central into DC2, eliminating the need to switch discs if you have the urge to play a particular song. All DC copies came with an Xbox Live code, which you redeem within DC2. You do have to pay 400 credits to get it, which is kind of a bummer when you consider you already bought both games, but even so it really is worth it. You'll not only have all the songs in one game, you'll also be able to "break it down" the same way as the new content (that feature was integrated for older songs), and learn particular moves you couldn't achieve before without any fuss. Unfortunately your star scores do not import with the songs, leaving you with a "clean slate," so you'll have to re-earn your "dancing cred."

This game is an amazing addition to the Kinect and dance-game families. It's new and improved, allowing everyone a much easier time learning the dances, more fun playing with more features, and the well-executed two-player option. The music choices are great, and the choreography is as fun to dance as ever. Dance Central 2 is already available in stores, exclusively for the Kinect.