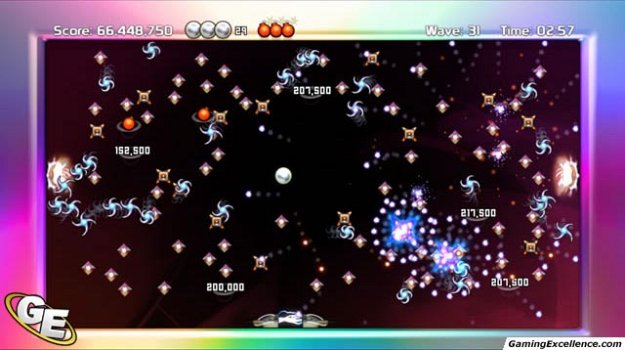 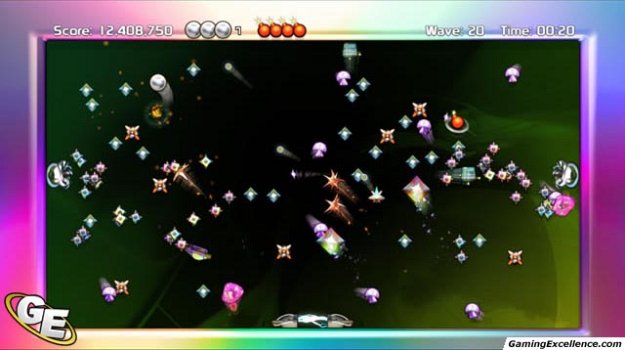 Crystal Quest is another Xbox Live Arcade title that features the tried and true mechanic that involves navigating a ship around a playing field while shooting down enemies. Fans of Geometry Wars, Mutant Storm and a few other titles will feel right at home. Crystal Quest also manages to add another little nuance however to distinguish itself; each playing field is a level that must be completed by collecting crystals and escaping through a gateway that is initially stationary at the bottom center of the screen. This adds enough to warrant looking into Crystal Quest if you've enjoyed the other games of the same ilk.

Developed by Stainless Games, Crystal Quest also features more in-game options that any other Live Arcade title to date. A menu allows you to change various musical/audio attributes as well as overall difficulty and stick responsiveness. While still meager by full-priced title standards, this is one of the few Arcade titles with as much customization.

As with other games of the same type, you use the left thumbstick to control your ship while the right thumbstick determines where you'll be firing. The old adage about not fixing something that isn't broken definitely applies here. Crystal Quest even features the smart bombs of those other games which clear out the screen in one shot. While the added collection goals of each stage and gateways add a little to differentiate CQ from other games, other little touches like collectable bonuses, time limits, enemy types and slow ramping difficulty really separate it from others. The difficulty may be a point of contention to some however since the first levels (and by this, I mean the first two dozen) are overly simple and the fact that they must be completed every time the game is played adds a little tediousness to restarting a new game.

Crystal Quest features two modes of play, much like Geometry Wars, which are Main and Classic. Main the is full-features modern game where you'll spend most of your time, while Classic is the archaic version with awkward controls (why not keep them the same?) and escape gates which net maddeningly worse penalties for hitting them during fast escapes. CQ is also one of the first Live Arcade games to feature add-ons like graphic and audio packs which can be added to change the look and feel of the game. Unfortunately, these are not worth the points and should have been made available as free downloads. These are simply not worth the money and do nothing to change the core gameplay of the game.

Graphically, even in the new mode, CQ feels like an old Xbox title. Aurally, it's nothing too special either. But what really counts here is the gameplay and if you can get past the initial levels which must be repeated upon each play through, CQ is a fun game that will appeal greatly to Mutant Storm and Geometry Wars' fans alike. While not as polished as other titles, Crystal Quest is still a fun game that is easy to pick and play and the simple fact that it contains levels to complete adds incentive to keep playing it.