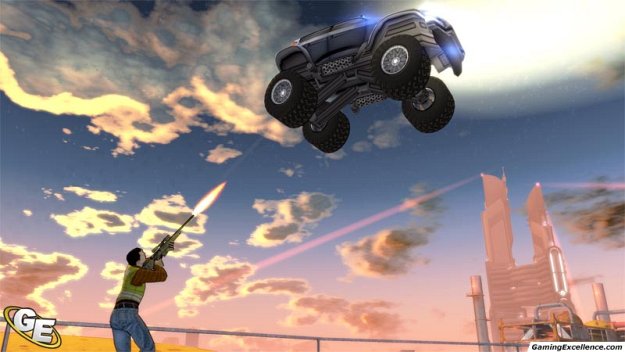 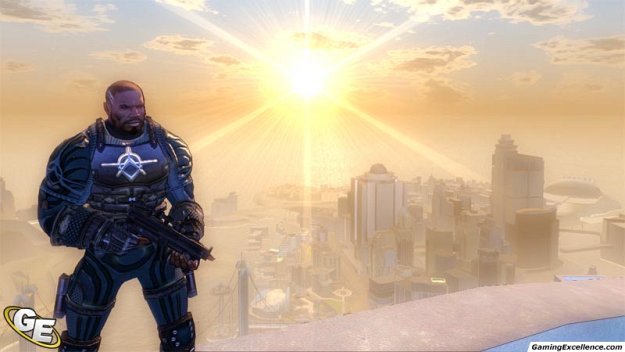 While it may look like a GTA clone and will inevitably get compared to Rockstar's revered series, if we get right down to it, Crackdown is in no way, shape or form a GTA-type game. This will both please, alienate and disappoint many depending on your expectations. Personally, while I do enjoy the various Grand Theft Auto outings as well as their copycats on the Xbox 360 (Saints Row, The Godfather) I was looking forward to something different and Crackdown surprised, delighted and thrilled me in a way I simply wasn't expecting. While there is a tiny hint of a plot therein, and while there might even be a point to the 21 gang-leaders to take down, Crackdown is a game about exploration, collection and leveling up. It has more in common with Spider-Man 2 and Mercenaries than with any other game and when all is said and done, it's also a game that is more addictive than any the 360 has ever seen. I've played Oblivion, I've played Gears of War, I've played them all, but by its simple nature, Crackdown (while it lasts) is simply a game that is impossible to put down.

Crackdown isn't about story, plot or characterization. Crime is running rampant and genetically enhanced humans are created to fight crime. Think of it as a mesh between Robocop and the Justice League. The point of the game is to eliminate the 3 heads of various gangs, each consisting of 5 "under-bosses" and 2 "lieutenants". When you explore a certain area, a file will be played giving you background on a certain criminal in your vicinity and you must then take them out, at which point another brief clip will play. You can technically take out the various criminals in any order, but preferably, you'll want to start at the bottom and work your way up. There's also a difficulty curve regarding the various criminal factions and so you'll want to take them on in the order your profile has them listed in. All told though, once you've acquired the rocket launcher, you can pretty much wipe out any crime figure in any order you so choose. In the center of all this violence is our hero. You get to pick a skin (which you can change every time you play) but they each play the same, they are all nameless and they do not impact the story in anyway. In fact, grunting from a high fall is the most vocal your character will ever get.

The point is simply that Crackdown is not a game about story, plot or characters. In fact, I spent over two hours at one point without firing a single bullet. Crackdown's main draw and addiction comes from its 500 green orbs scattered on the rooftops of buildings. The green orbs are used to level up your ability which in turn will allow you to jump higher and gain access to higher orbs (the higher the orb, the higher its reward). There are also 300 "hidden" blue orbs located around the city, but unlike the green ones which are generally on top of buildings and easy to spot (getting to them is really the challenge here), the blue orbs can be located anywhere and are generally a lot harder to locate. The blue orbs will also level up the four other skills that Crackdown keeps track of: driving, explosives, hand to hand fighting and weapons. These other skills are generally leveled in-game by using, and taking out criminals with, grenades, guns (the farther away you are, the more level you gain), doing vehicular stunts/damage and fighting bare-handed. Whenever you perform a specified skill, the game will actually display the skill-drops to represent what type and how many of each you've gained. Once you've leveled a skill to a hundred percent, you will gain new abilities or powers, like being able to jump a lot higher and being more precise with firearms.

Don't be fooled, this is the main draw to Crackdown and it does a great job of entertaining. Finding (and getting to) orbs is far more entertaining than can ever be explained and only those who've played Spider-Man 2 will understand the sheer joy of scouring rooftops to find them all. 800 orbs in all, it may not seem like much, and even though some are very easy to get, the simple joy of jumping from building to building never gets old.

Besides all the killing, collecting and leveling up, Crackdown also gives you the option of competing in races. There are car races and foot races. These last ones are the more entertaining as they have you scaling buildings and jumping from rooftop to rooftop trying to cross green beams of light. If you happen to beat the record time, you will also gain ability points. The trick here is to only beat the record time by a second of two since your best time will then default to the time to beat. This is a page right out of Crimson Skies and a fun distraction from the other things to do in the city.

Lastly, you will also be able to play through the game cooperatively using Xbox Live. You can do this by simply coexisting in the same world together and simply voice-chatting or you can actually do races against each other or help each other out with bosses. This adds a nice twist to Crackdown but one that doesn't feel as fleshed out as it should. You'll probably get more fun out of the various leaderboards that keep track of the various race-times as well as the boss-killing mini-games - where you simply pick a previously eliminated boss and try to kill them in as little time as possible.

Graphically, Crackdown is like nothing we've ever really seen. A hybrid of what appears to be cell-shading, cartoon and lifelike 3D graphics, the overall look of the game is fantastic. Using the Havoc engine which provides great physics, the game keeps track of many little touches that create a truly lifelike experience. If you kick the back of trucks the doors open with properly modeled interiors, the day/night cycles affect lighting throughout the game (seeing the lights on the bridges turn on is great) and while the characters, cars and building do have a blandness to them, they each feature enough small details to make every location unique and memorable.

The audio portion of Crackdown is perhaps its weakest link simply because it doesn't contain enough content. The music, while fitting in areas, doesn't vary enough and gets repetitive early on. The small quantity of enemy and pedestrian voices are generally funny, but there just aren't enough of them. The highlight is truly the main "announcer" who talk you through everything in the game: briefings, tutorials, info, non-sensical quips, etc. He's got the perfect voice and tone for the game and he rarely repeats and never gets old. Everything he says also has an "end of the world" importance to it which would make Ed Wood proud. Nice touch.

Luckily, when everything is added up, Crackdown only comes up to 900 Achievement Points which means that future content will be added; to hopefully add more modes to the game. Heck, another gang or map area would be fun too! And then there's the whole Halo 3 beta promotion. This is a link encoded into the first shipment of disks that will, eventually, allow you to download and participate in the Halo 3 multiplayer beta. This is a ploy used throughout videogame history to call attention to lesser-known games or new franchises. While I did run out to buy Zone of the Enders for the MGS2 demo, I'd recommend buying Crackdown for the game itself. While Halo 3 may be a great incentive, Crackdown is solid enough to stand on its own and it's just a nice bonus to get the Halo 3 beta to look forward to.

Overall, Crackdown is an amazing game that is both fun and addictive but loses a lot of appeal as your stats get maxed out and the realization that what's left is simply a shallow, repetitive experience. I remember hating the story elements of Spider-Man 2 (and that damn little girl who lost her balloons) and loving the upgrade/exploration aspect. So much so that I deleted my save file and restarted the game from scratch a few times. Crackdown is the same type of game. The variety of achievements will also keep you entertained for a long while. A solid, fun and wholly addictive game that should be purchased on its merits alone. Hopefully the game will be successful enough to warrant a sequel with a more fleshed out campaign mode. Highly recommended.