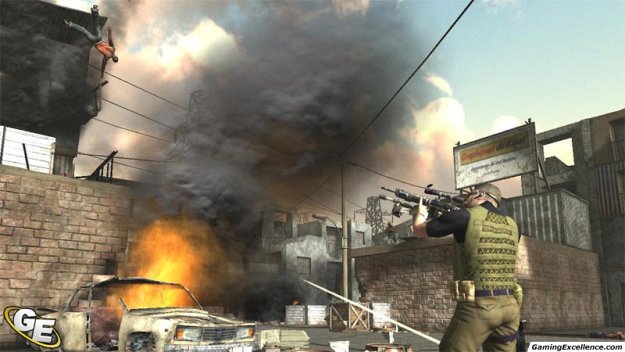 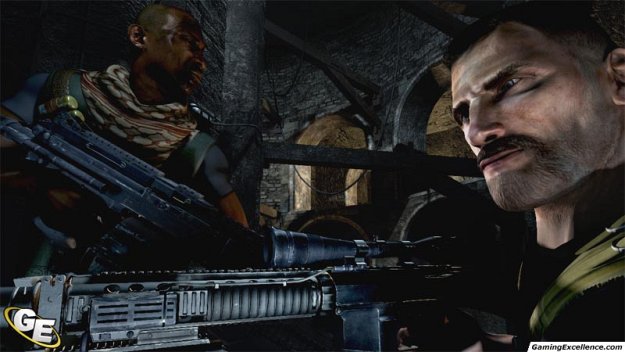 Conflict: Denied Ops is the fifth game in the Conflict series, developed by Pivotal Games. As the first entry onto the current-gen systems, you would think that Denied Ops would be a great leap forward in the series due to advancements in hardware. It's not. It's really, really not. The game is a budget title in every sense of the word, with very few, if any, redeeming qualities that justify the purchase (or even rent).

The perspective has been switched from third-person to a first-person view this time around, and the squad has been cut from four members to two. The key to the gameplay, supposedly, is co-op tactics. If playing by yourself, you can switch between agents Lang and Grave, and if playing with a friend, you each play as your respective character. Lang, the cliched marine who hates rookies, and uses his sniper rifle. Graves, the ever-swearing "bad ass", uses a machine gun. That's right, they always use the same guns - you can't even pick up other weapons. What is this, 1992? No, wait, you could change guns in Wolfenstein 3D.

The gameplay consists of Lang and Graves running around, shooting everyone they see, usually completing boring objectives such as retrieve this data, go here, etc. Pretty much everything is destructible in Denied Ops, such as being able to shoot doors and tables and the like. These surfaces break apart extremely unrealistically. However, they fit in nicely with the other ugly textures in the game. Every level is also littered with explosive barrels, boxes, and whatever. Usually, you can just shoot a barrel, watch the explosion, and everyone in the room will die. I even had a barrel next to me explode once when I was simply reloading my weapon. I guess even the barrels think not being able to switch weapons is dumb.

The graphics are terrible - the game looks like a PS2 game. The player models are ugly with animations to fit, as enemies die in an eerily similar way to those in Goldeneye for the N64. There is also a blur effect whenever you reload your weapon, whether this is intended or not doesn't really matter, as it doesn't look good. The short cut scenes before each level are ugly too, and the terrible voice acting makes them even more painful to watch. The music throughout the levels also gets annoying and repetitive quickly. Worst of all in the audio department, however, is the sound of the guns. They sound like pea shooters. You'd think since you are shooting ninety percent of the time, Pivotal would take the time to make the guns at least sound cool. Err, sorry, I meant gun.

The controls do a decent enough job, when you're not in a vehicle. The aim at times feels off, especially if you are trying to run and shoot at the same time. The L trigger allows you to issue commands to your dim-witted AI buddy whom you'll have to baby-sit your constantly; otherwise he will just stay put, standing around. Even if you give him orders, some times he will ignore them just to enjoy the ugly scenery. Luckily, the enemy AI is just as dumb, and never really requires strategic tactics to handle.

If you somehow manage to struggle through the rather short campaign, you can then torture yourself with the multiplayer. With the whole three people I found online (you poor, poor souls) I played the three types of game modes available - deathmatch, team deathmatch, and conquest. All three are unoriginal, and all three are plenty boring. Like in the campaign, you can't switch weapons. Luckily, however, you can switch the game off.

Why Pivotal Games would switch their mildly enjoyable third-person series to the over saturated first-person market is anyone's guess. Denied Ops suffers from abysmal graphics, awful audio, and incredibly low production values. I'm running out of ways to describe just how awful this one is. Not even worth a look if it's in the budget bin.