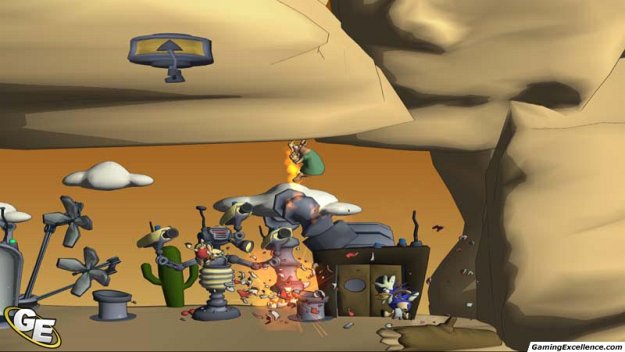 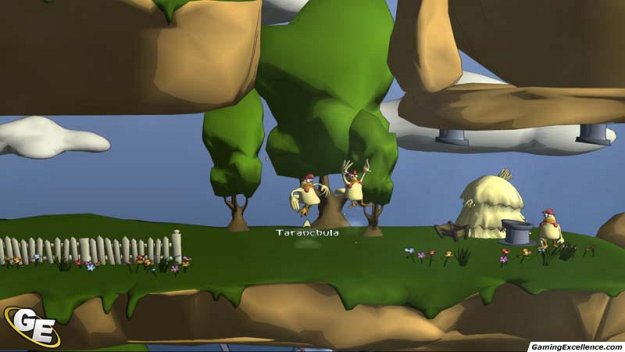 What game offers the ability to be a Chicken, an ape, a barrel of TNT, a frog, a sheep, a rock, or a mutant? Only one: Cloning Clyde, a side-scrolling platformer by NinjaBee and exclusively on Xbox Live. The game features a group of identical clones all named Clyde, working together to try to escape the laboratory in which they were created, and now are being held captive.

Cloning Clyde opens with a comic page like cutscene, explaining the proceeding events which led to his captivity. Getting a mere twenty dollars in exchange for volunteering to be a part of some experiments, Clyde becomes involved in a cloning disaster. Once things go awry, there are tons of Clydes running around, and the scientists don't want any of them to escape. Of course, it's up to you to help your little buddies out. Various portals are scattered across the lab, acting as the access point to each level. Themed to the nines, the levels place you in swamps, arctic tundra, sandy dunes, and many in between. Although original in theme and layout, each level uses the same basic setup. You begin with only one Clyde, but will end up freeing others locked up in boxes, trapped in piping, or you might stumble across a cloning machine that allows you to make more Clydes. Your goal is to destroy the security machines without being killed by their protective exploding chickens. Once the last security robot is defeated, the escape portal will appear. Obviously only one Clyde may exit the final portal in each level, the rest being left to climb out of air vents to their freedom, earning you a higher score for each one that you do save. Of course, Cloning Clyde is also a race against the clock, attaining more points if you can beat the par time set for each level. Since most of your time is spent getting all of your newly discovered clones into the vents, it's much easier to do the level twice. The first to gain 100% completion, and the second to race through and defeat the security robots as quickly as possible, exiting before the par time. Of course, the first step is where complaints to Cloning Clyde may arise; only being able to move a single Clyde at a time. All in all, you're simply out to collect scattered objects, kick some robot butt, and save all the Clydes.

Initially, Clyde is pretty limited, but the ability to switch between the various clones in order to complete puzzles and challenging terrain that develop during your adventure really pushes Cloning Clyde away from the norm. The idea is straight-forward: Put a chicken on one slab of the DNA cloning machine, stand Clyde on the other, then rock-it. You'll be presented with a wicked looking mutant Clyde with some new abilities, and an unlockable gamer picture for each Clyde mutant too! Combining with a chicken lets you fly and look awesome. Froggy Clyde lets you swim. Apes enable climbing across ceiling surfaces. Clyde plus Sheep obviously equals long distance jumping. And a personal favorite--combining a Clyde with an explosive barrel gives you an explosive barrel… with arms and legs. You can become Rock-Clyde as well, which will be spared from description, as it is as awe-inspiring as the explosive barrel hybrid. Although you do have plenty of variability with these mutant Clydes, the machines usually appear at the start of the level, really demoting the level of difficulty. Instant re-spawning also takes off the pressure, and there are checkpoints too. It may seem like Cloning Clyde is living up to be a boring cake-walk, but it's quite the contrary, as it only ever projects a laid back feel with an oddly addictive side to it.

After the initial levels are completed, there is an additional ten "challenge" levels. These levels only count towards gamerscore and not to game completion in itself. The aforementioned collectibles are called "Killer Kenn" action figures, also cloned, and are simply collected for bonus points and gamerscore. Simply put, you'll get your ten dollars worth. Completion of all twenty-five levels under par time, the Mutant Clyde cheat is enabled in the cheat menu which basically offers access to all of the special abilities simultaneously.

The two online modes include co-op and versus. Simply enough, co-op features multiple players working together to complete any of the first twenty-five levels. Versus features two teams, each responsible for taking out their opponents security robots. The madness ensues nicely, and can be addictive on its own.

Cloning Clyde is definitely an Xbox Live Arcade gem. Want quality and quantity from your ten bucks? Look into Cloning Clyde, because stepping on buttons and blowing up rocks hasn't been this much fun in a long time.