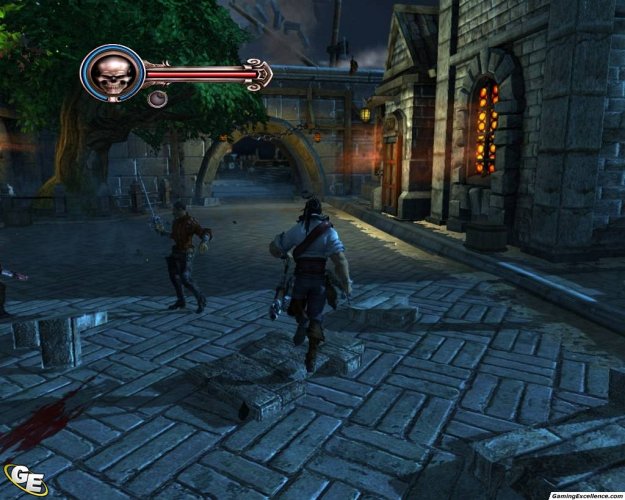 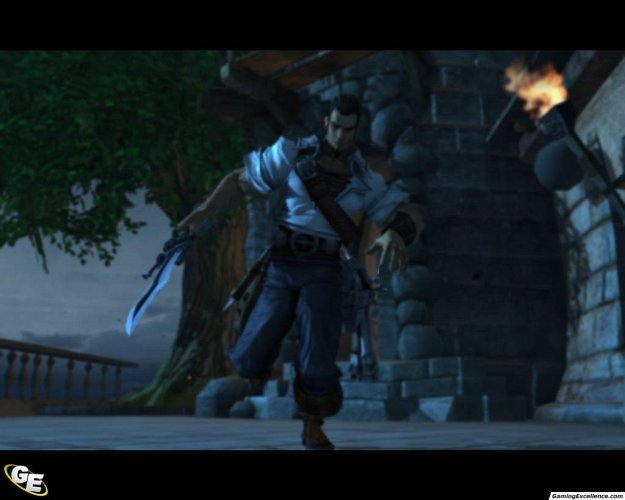 Lower your swords and prepare to be boarded, or get ready to fight until the death. A prediction of glory, or famous last words?

Out of publisher 1C comes a new hack-and-slash release for the Xbox 360 and PC. That game is Captain Blood, and I've only recently had an opportunity to go hands on with a preview build. Set to ship later this year, Captain Blood is based on the novels by Rafael Sabatini, where you play the role of a privateer in a pirate-themed hack-and-slasher, and battle soldiers and other pirates on both land and sea.

The first thing you'll notice about Captain Blood is the vibrant visuals. While the world and character models themselves aren't particularly detailed, it's the unique visual style that makes it work. The graphics are intentionally blocky, it's a stylistic effect that makes the game feel less "real" and more "entertaining", also denoted by some of the animations (such as when a ship meets a watery grave). The framerate is very solid, and I was also impressed with the large number of units on-screen at any given time.

Getting into the game, the control scheme is quite simple. A pair of attack buttons, block and grapple, and a one-shot kill pistol button, assuming you actually hit the enemy of course. That's actually more difficult then it sounds, and takes a bit of luck. Being a hack-and-slash game, the combat is heavily combo driven. If you can catch the grapple at the right time, you're able to unleash a devastating combo and unleash a world of hurt on your unsuspecting opponents.

Captain Blood has three major settings, land, sea, and the boss battles. On land, you'll find yourself going sword to sword with waves of soldiers and other pirates, moving through various locales like towns and shipyards. Often, you'll have a group of allies that turn out to be useless cannon fodder due to some odd AI behavior. Occasionally, you'll come across obstacles like barricaded doors; this is where the game turns into a well-timed button masher. On the high seas, you'll need to run around the boat and man the cannons, moving from cannon to cannon to take out attacking vessels. If an enemy vessel gets too close, you'll be boarded and have to fend off the attackers with your sword in close combat.

Speaking with a producer on the game, one of the areas Captain Blood will stand out is in its length. The game is set to ship with thirty-seven different levels, and offer between thirty to forty hours of gameplay, depending on your skill and level of determination. Like any modern hack-and-slash game, Captain Blood offers an upgrade system, allowing you to purchase items from a shop menu, items like heath, combos, and executions. As you earn experience, you'll unlock bigger and more damaging combos, as well as a wealth of creative executions. One of my particular favourite executions based on my limited time with the game is where you grab your opponent's weapon out of their hands, and use it to kill them. There's just an odd sense of satisfaction knowing you won't have to clean the blood off your own blade once the battle is complete. This is only one example of what are sure to be many creative ways to seal an attacker's fate.

On the multiplayer front, Captain Blood takes a different approach. Offering head-to-head single console multiplayer (no Xbox Live support), the multiplayer experience will be a form of survival mode, where you'll need to fight off hordes of attacking enemies (and your multiplayer opponents), where the last man standing wins.

You may be thinking to yourself, it's just another hack-and-slash game. I can't say that it didn't cross my mind at one point. However, after sitting down with the game, I've come to realize what makes Captain Blood different: it has a sense of humor. It's evident that the game doesn't take itself too seriously, it's lighthearted and designed to be a pick up and play sort of game to appeal to a wide range of gamers. This sense of lightheartedness oozes through the visual style, simple control mechanism, and button-mashing objectives. This approach is more accessible to the more casual gamer, who also happen to enjoy a bit of gore and some spectacular executions.

Set to ship out this holiday season, Captain Blood isn't a revolutionary game in any sense, but it will offer a more casual and relaxed hack-and-slash environment accessible to virtually anyone. Its unique visual style and lighthearted sense of humor are certainly appealing, and we're curious to see what's in store when it hits shelves later this year.