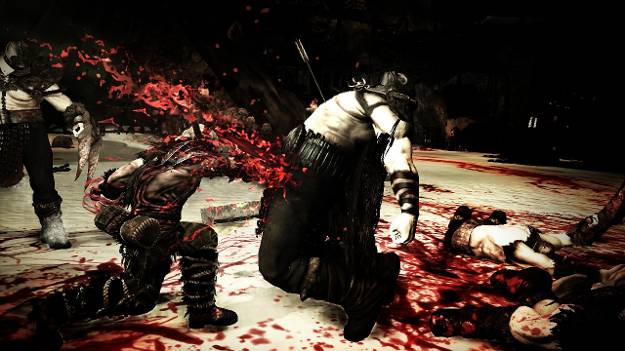 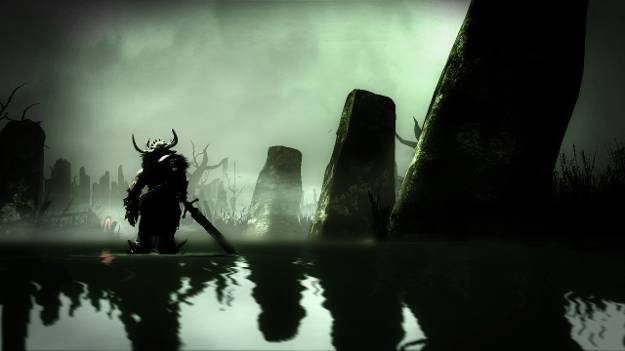 As a gamer I pride myself on the fact that I'm willing to play almost any genre. But while I may be willing to branch out into the occasional sports game my primary love, outside of RPGs, is definitely the action genre. Ever since the old days of Final Fight I've had a soft spot for brawlers which readily expanded to hack and slashes as they became more common. There's something cathartic about tearing apart large groups of enemies with your unspeakably dangerous protagonist.

That said I don't consider myself a snob about these games, not every game needs to be the next God of War. Heck, one of my favorite next-gen games is the fairly mediocre Conan which I've played through a good four times. I even enjoyed Dante's Inferno for what it was. So it's rare that I don't enjoy even a mediocre hack and slash (barring movie tie-in games of course). 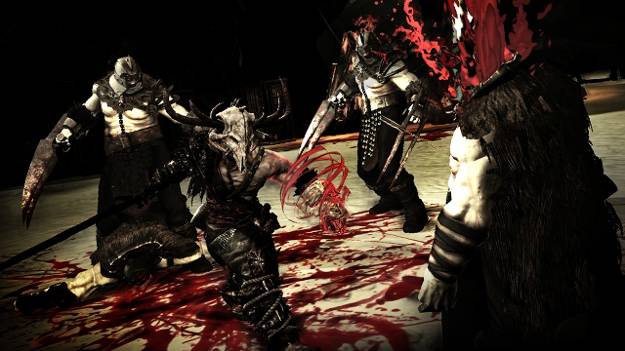 The first, and likely the most important, is a smooth combat system. You need responsive controls as well as a predictable cause-effect situation whenever you use a maneuver. For example you as the player learn when you press light attack your weapon has a set amount of reach, priority and whether or not you can interrupt the animation to roll out of the way of an enemy attack. This isn't always consistent in Bloodforge and it's such a huge issue that it makes some fights more frustration than fun.

When attacking enemies your actual hitbox is generally smaller than the actual animation shows leaving Crom, with his gigantic sword, having an impressively short range. He'd be better off with a butter knife it seems. Even the giant hammer weapon he picks up isn't much better in this regard with only the claws having an appropriate range. On the flip side of this the enemies often have larger ranges than you might suspect with the only advantage that Crom has is having a much quicker attack speed than most of them. Since the enemies tend to cluster up, and you have no way of splitting them up until almost the end of the game (barring magic but we'll get to that), the only way to attack is to run in and swing a few times before rolling away. This gets horribly repetitive since, even when you get the hammer which appears to be designed for crowd control, there's no good way to handle groups. All of this adds up to make the combat unintuitive and hard to really get a handle on which means it fails the first key element.

The second most important thing is that the animations have smooth transitions. This allows you to know when you need to press the button so you don't button mash. Button mashing works fine in some games, like God of War or Dante's Inferno, but the combat system here is too sticky for that. For example if you press the dodge button twice you will dodge twice no matter what so you better be sure you don't press more buttons than necessary or you're stuck performing that move.

Luckily your roll is mostly invulnerable to all harm... except when it isn't. There are a few enemy attacks that can pull you out of a roll notably grapple attacks or energy bursts released when an enemy slams his weapon to the ground. There's only one common enemy who can grapple you but when he does so your character responds by rolling away. And often ends up grabbed yet again. But worst are those enemies who release energy bursts. There are only three of these bozos, with one being the final boss, but the first one who does this is a pretty common enemy. Trying to roll away from his attacks will result in you taking damage so you have to try to roll behind him which would be simple enough if the camera didn't ruin everything. 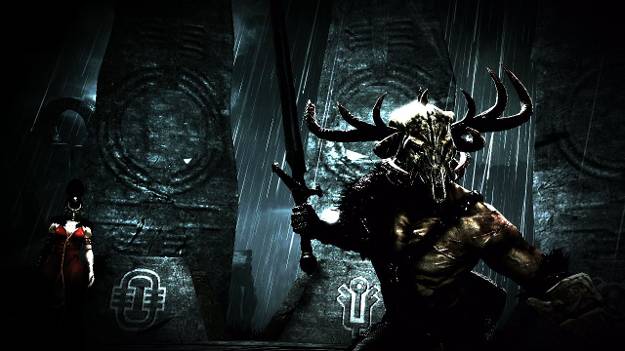 See in most other hack and slash games the camera follows you in a very particular way, moving to set positions to give you the clearest view of the battlefield. Now this is done because you can't control the camera but it also means you can almost always see where you are and what you're doing. But Bloodforge seems to work very hard at making it so that you can see a blasted thing.

To begin with the camera in this game starts off horrible. As you walk around the camera sways from side to side as well as bouncing with your steps. This creates a sort of bounding look to the game which looks interesting in trailers but really adds nothing to the experience while also not being too offensive. Sadly once the combat breaks out the camera becomes an insane mess of zooming in, zooming out and wildly spinning about, made worse if you actually try to turn the camera manually so you can see what you're doing.

Annoying enough this seems like it was purposefully done to emulate the shaky cam and rapid editing of the terrible action movies that are rather prevalent nowadays and it's beyond jarring. What makes those movies tolerable is that the action scenes are just a part of the experience but in Bloodforge most of your five hours of gameplay or so are spent fighting, dealing with this crappy schtick. It's bad enough that during some of the most intense combat scenes it made me feel physically ill. Admittedly I have a problem with motion sickness but I managed to get through Cloverfield, a movie that some claimed caused this as well, without issue.

All of this would be somewhat mitigated if the upgrade system wasn't so ill thought out. As you advance through the game Crom learns new attacks which aren't really useful since only basic combos can be used much of the time. The actual improved weapons he finds make a much more noticeable differences in your abilities and are thus greatly appreciated. The magic system though most certainly isn't. You have three spells you can learn, each with three levels to it. Only one of the spells is much good, that being the Taranis spell since it automatically kills one or two enemies while damaging the rest. The others are garbage and not even worth bothering with since the Cerunos spell doesn't seem to do anything and Nilhem freezes them in place for a few seconds.

So what does this game actually have going for it if the combat is poorly designed and the camera is almost unbelievably horrible? Well it has an amazing aesthetic to it. The world of Bloodforge is a kind of mish-mash of Celtic mythology blended with a sort of look that's part-Conan, part-Sin City. It's got this saturated filter that, when paired up with the bleak colors as well as the dreary surroundings, gives the game this really oppressive feel to it. Honestly the lands where Crom, your protagonist, travels feel about as desolate as they get. Really the graphical design and the setting itself for this title is just amazing.

Normally the first thing you'd want to talk about with a video game is the story but that's pretty irrelevant here. There is no real plot to speak of besides "kill gods to get revenge for the death of your family" so if you've seen God of War you know how this goes. But at about the 80% point it pulls a rather interesting plot twist that makes the finale pretty interesting all things considered – still derivative as hell but interesting.

What isn't so interesting is the voice acting. Crom's voice actor is just beyond horrible, growling and yelling every sentence like it's the only way he knows how to communicate. Hell even Kratos spoke in a normal tone a few times through his adventures, Crom has his volume stuck permanently at 11.

Normally the suggestion would be to just mute the game but the other voice actors are pretty good and the music is pretty phenomenal. When loading it up I was expecting some ridiculous sounding heavy metal guitars to match the look of the game but it actually has a rather nice orchestral soundtrack which is a nice surprise. If nothing else the sound and graphic team both deserve the utmost praise for their work here.

Sadly the same cannot be said for the character animators and the gameplay designers. These fundamental parts of the game are just so messed up, especially the gameplay, that there's almost nothing to salvage here. Even if you can find something to enjoy in this title it is definitely not worth the current price of $15 in any way, shape or form. Frankly I'm surprised this is part of a Microsoft promotion with the poor quality of this title in just about every way. Please don't fall for it - there are better games coming out in the next month or so that are worth your money instead.