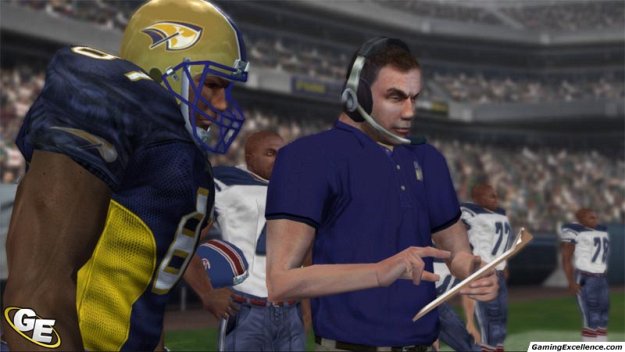 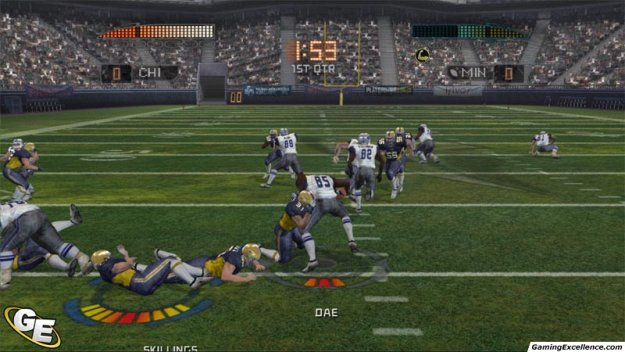 When EA bought the exclusive rights to the NFL license, it spelled disaster for a few football game makers. While Sega seems to have taken heart in trumping EA in every other major videogame sports game, Midway has simply decided that a license shouldn't spell fun for everyone. Creating its own league with fictitious players and coaches (and being able to poke as much fun as they want at reality) Blitz: The League proves that you don't need a football title that pretends that everything is roses when you can simply treat the sport like it was meant to be played; rough, dirty and vulgar as hell. For those who missed out on the last-gen version of Blitz, there is no better arcade football title out on the market. BTL is easy to pick up, doesn't take itself too seriously and is so over-the-top that even non-football fans can be entertained by it. Add the fact that it throws most (if not all) the rules out the window and you have a game that is readily accessible. For those who've already played through the original though, is it worth a second purchase on the 360?

While the multiplayer portion of Blitz: The League is really the aspect that will keep most coming back to it (offline and online as well), a lot has to be made of its campaign mode. The basic story is a typical "loser to hero" scenario spiced up by sex, drugs, f-words, violence and lots of would-be malpractice lawsuits. You begin at the bottom of the 3rd division and through 10 season games (and one playoff), you must win enough games to climb back to the 1st division. Playing through the initial division, you'll have to try very hard to lose a game. Playing in Division 2 and 3 however will start to show off BTS's nifty catch-up A.I. One of the things I hated about the Xbox version of Blitz The League was it's magical rubber-banding. While it is indeed a "campaign" mode, it shouldn't feel "scripted". On the 360, this effect seems to have been toned down a lot. If you simply play intelligently in the fourth quarter (run the ball, sit on your points, eat up the clock, etc) you should beat the A.I. easily enough. It also helps to intelligently upgrade your player's stats through training, juicing, equipment upgrades and gear.

The campaign mode also features a bevy of cool cutscenes (that could've looked better) to further the story along and also display lots of lascivious behavior. Its main asset though is its team creation and its training options. The fact that you can use your created team in multiplayer mode is also an incentive to making it as oddball and stacked as possible. As the proud owner of the Pittsburgh Papercuts, I can attest that everyone fears the Papercuts! Oh well, you get the point.

As a single player game, you'll also have the quick game option which lets you simply use The Leagues teams (with some really clever player names) to use as your own. In this mode and the campaign mode, you'll play to unlock a great deal of content in the Extras menu. On the Xbox, I remember the unlockables as much harder to achieve, but on the 360 a few quick games (with 5 minute quarters) and I had almost all the FHM pictorials unlocked. While these seemed recycled from the Xbox version, I doubt anyone will complain and it seems fall in line with the overall "shadier" aspect of Blitz: The League. And besides, Madden on 360 seems to have taken its team cheerleaders out anyway.

As mentioned, BTS shines as a multiplayer game, whether online or off. And while you can customize certain aspects of your game (clashes, custom team use, quarter length, etc) it's too bad that there aren't anymore modes included. Granted, while a game of BTS is more fun than playing straight football, it still would've been nice to see more modes added as we've seen with the Outlaw series of golf and volleyball. The beauty of multiplayer BTS is that it's crude, rude and over-the-top. Yes, there are still 30 downs to make, but it's more fun to sometimes forget about building up meters and putting up points and just seeing how many dirty hits you can land and how many spines you can break in the course of a game.

In the gameplay department, nothing has really changed from the Xbox version. The controls are still easy to use and the kicking "DDR" meter is still present. The game is still that of regular football, but with the added bonus of focusing on a "Clash" meter that you build by performing touchdowns, dirty hits, taunting, gaining yardage and basically playing the game as the NFL never intended. This built-up clash meter will allow you to access a bullet-time slow-mo of sorts in which you can use more powerful moves with various positional players. If you collect enough Clash Icons, you can also enter Unleash Mode where you'll trigger an entertaining assortment of cutscenes that will truly show what playing dirty is all about. The Clash system plays a lot like NFL streets' game breaker system, but it's more balanced and doesn't seem as one sided. Also, in Street, using a game breaker usually meant a surefire touchdown while in Blitz, you'll have a leg up (for sure) but you're not guaranteed anything. In comparing the new games, Blitz also features a much better defense and it's sometimes enjoyable to get someone in your red zone only to deny them a TD time and again. Blitz also features more play calling options, better animation and is simply a lot more fun.

While this is a 360 game, it's obvious that it really is just a high-resolution port of an Xbox title with a few added animations. Still, the game looks great and the players are fun to watch. So what if every player doesn't sweat of every jersey doesn't get dirty in a typically scientific way each and every game? There's tons of swearing, a cool broken-bone-cam and FHM models inside. The cutscenes are really the worst part of the package and some are just plain ugly to look at. The on-the-field action though, while not 360-worthy, still demonstrates the Saving-Private-Ryan-esque feel of aggression, claustrophobia and crazed happenings that get the blood boiling.

In the audio department, Blitz: The League is an exemplary package. From Lawrence Taylor and Bill Romanowski's F-word ladened musings, to the one-man commentary team, the cutscene and on-the-field voice-acting and the amazingly memorable soundtrack, Blitz delivers the goods in spades and all in crisp surround sound. I've never in fact heard such a perfect soundtrack in a sports title before and that says a lot! As mentioned though, there are a lot of F-words in this game. And if you can handle that, check out Romo's video in the Extras... wow. That's one angry human being!

In all, Blitz: The League remains the perfect arcade football it was on the Xbox and a perfect alternative to the professional licensed titles out there. The question for many is simply a question of what console to get it on and if an upgrade is worth it. Well, seeing as you can pick up the last-gen version for much less, if you still play your Xbox, you may want to check it out there first. For 360 owners however, BTS tweaks a few A.I. issues, looks and sounds better and gives you a bunch of achievements to strive for. I've personally owned the Xbox version and would trade it in for this upgrade any day. While I would've enjoyed seeing a lot more content added, it's still the best version of this game to date when friends come over, I'd much rather play them on wireless controllers with a faster loading system. Besides, it seems easier to unlock the FHM content, and isn't that what we all really care for anyway? F-yeah!