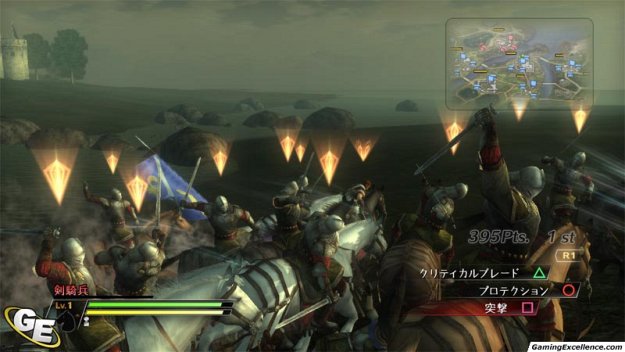 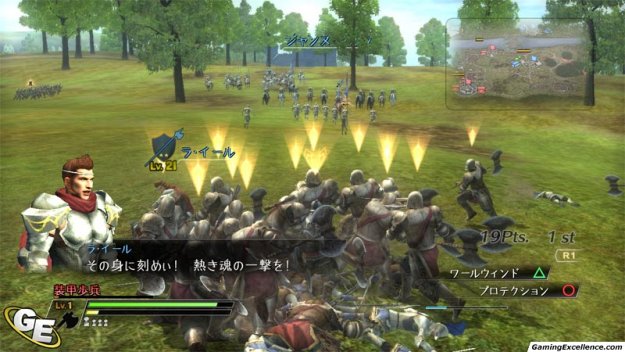 If there was ever a publisher that got more mileage out of a single genre, historical era or setting, it's Koei. The Japanese company nestled itself a nice little niche through the PS2's popularity, pumping out dozens of action and strategy titles set in the feudal Far East. But Bladestorm? She's a European lass meant to woo western gamers. And while we're grateful it's not another "Dynasty Kingdoms Xtreme Romance Tactics: Legends of the Warrior Samurai Sword IV," the setting hasn't done much to improve Koei's time-honored mediocre mechanics.

Bladestorm: The Hundred Years' War is a real-time strategy title in an action game's clothing, but the end result is something more akin to cross-dressing than a fashionable fusion of genres. Unlike Dynasty Warriors, you're not leveling the battlefield as a one-man wrecking ball; unlike Kessen, you're not an omniscient commander directing troop traffic. You take the role of a mercenary, accepting contracts to conquer on France's or England's behalf. In gameplay, you lead units across the base-laden landscapes of Brittany and Normandy -- not button-mashing out combos to take down enemy battalions, but wading in with cavalry, archers, swordsmen, and more with a few special abilities sprinkled in between.

It's an action game without much explicit action, and a strategy game without the tactical tools to be strategic. It's alienating either way, and Bladestorm isn't helped by poor AI, limited unit control, and a general lack of congruency its concepts. Still, if there's something to enjoy about the title, it stems from accruing abilities and riches across your campaign, charging through waves of knights, and basking in some limited 14th century context along the way.

Between battles, you'll visit the tavern: Bladestorm's hub for buying (a limited selection of) equipment, enlisting recruits, reading "gossip" for gameplay hints, and picking up contracts from either side of the conflict. Most contracts are multi-day battles, and you'll have anywhere between two and a half-dozen to choose from at a given point. Packing skirmishes into these mini-campaigns is a nice move on Koei's part -- you'll be assigned to capture a fort within two or three days, but are free to roam the battlefield looking for trouble, building up your fame rating by taking down other enemy squads and positions before you complete your objective.

This looseness gives the game a few fun moments. Saddling up some spear horsemen and strafing through huge groups of enemies for the heck of it feels pretty good. But oppositely, the lack of direction speaks to the game's uneven, underdeveloped gameplay. The pre-battle map shows which camps are controlled by the English or French, as well as their strength, but the in-game mini-map is nearly useless. Two levels of zoom don't convey enough information, and a tactical overview showing troop types, who's engaged in battle, and so on feels sorely missed.

It's partly because of this that battle actions feel random. Without being able to judge the overall battle scene with any kind of accuracy, the player isn't encouraged to think tactically. Instead, you'll end up grabbing a squad of spearmen or archers, rolling up to the nearest pack of enemies you spot, and holding the right shoulder button until they fall flat. The lack of battle management options wouldn't be an issue if Bladestorm was a passable action game, but it doesn't even attempt this. Bladestorm tries to layer the same old complexified rock-paper-scissors format we've seen in RTSs for years, but the system lacks a sense of detail or balance.

There's good amount of troop types available (swordsmen, different kinds of cavalry, pikemen, mace-wielders, even cannons and camels make an appearance later in the game), but each are limited to three relatively bland abilities. Likewise, a "rally" command or method for calling for assistance are sorely missed, and the fact that battles time-out when the sun sets (we can imagine: you're about to impale an infantryman, only to apologize to the soldier you've nearly killed, muttering something about "quittin' time" as you wander back to town) ironically brings light to Bladestorm's overall poor execution.

We appreciate the ability to upgrade troop types between battles, adding to unit size, attack power, or toughness, but Bladestorm's chaotic combat is desperately in need of some commands to corral its lack of flow. Enemies and allies alike don't seem responsive. Granted -- hand-to-hand combat is a messy affair, but units frequently stare at walls if they get turned around, get caught against trees and surfaces while running, don't reposition themselves when they're about to be flanked, stand still when you're nearly breathing on them with a squad of lancers, and simply don't react intelligently at all. Lieutenant-type units -- base commanders and other commanders that appear here and there, are just as unremarkable: often idling until you surround them with enough swordsmen to knock them out.

Even when the titular "bladestorm" feat is activated by felling enough foes, its effectiveness is unclear. Your units light up, seemingly boosted by a greater sense of morale to run faster and dish out more damage. But Bladestorm's presentation, animations and AI are too dull to reflect its usefulness: there's little combat chatter, the (non-existent) targeting system seems faulty, and environments are generic, fort-populated forests with little impact on the tactical aspects of the game.

Building momentum across a battle is about the only fun part -- luring as many squads as possible to you, unleashing a sweeping attack with the Y button (like halberd-fighters' "scythe" ability), then letting the ability cooldown and doing it again. Bowling through crowds of hapless archers with some cavalry can be a blast, but again -- it's one-button combat. Even Bladestorm's leveling system feels unclear. Units gain ranks during battle, but there's no experience system in place to measure this progress. (When I gain a level, is it applied to my overall skill in that unit type, or does the level "belong" to only that squad of infantry?) The system doesn't feel interconnected, and this limits whatever rewards you accrue from your tedious time on the front lines.

If you're starved for strategy and like the idea of open-area, semi-persistent medieval battle scenes, Bladestorm might make sense. Unfortunately, you won't find rewarding, patient strategy, or dynamic action within. Couple this underdeveloped concept with some of the simplest AI you'll see, boring presentation, no additional online, co-op or competitive modes, and a lack of real meta-gaming or skill development across a campaign, and what do you get? A package that even the most desperate console commander will find little to rally behind.