BlackSite: Area 51 is a action game developed by Midway Austin for the Xbox 360. The game was released on November 12, 2007.

Most people that came across the Midway booth seemed to advance on Stranglehold to get a quick play in before its release this just past Tuesday. Upon fulfilment of gameplay and questions alike, they would advance on to the next booth either quickly glancing at BlackSite or simply not glancing at all. Read More. 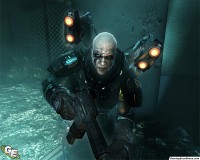