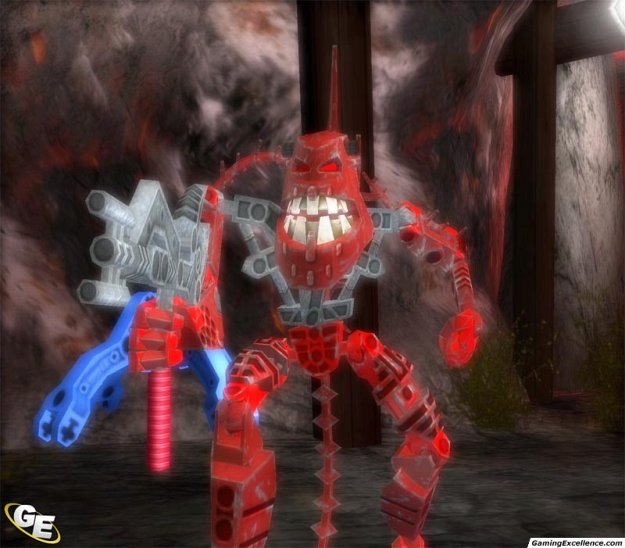 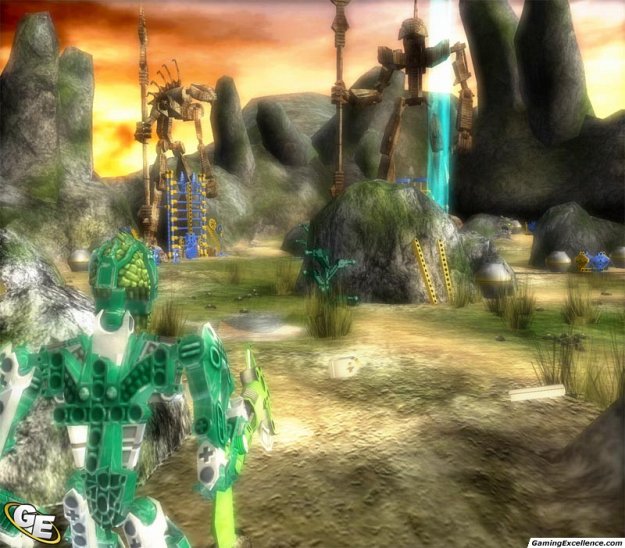 Expecting much of Bionicle Heroes was my first mistake. I had plenty of people suggest I try out LEGO Star Wars and such, but I had never got around to it. Bionicle was put on my plate during a dry spell, and I've decided I would have rather not been playing games than soil my fond memories of playing with LEGO as a kid with such a treacherous title.

Gun-arm robot LEGO dudes sound cool enough right? Unfortunately, Traveller's Tales' rendition, also known as Bionicle Heroes, is not. Bionicle Heroes has no innovation, nearly no plot, no features, and is nearly unbearable with such an awful over-the-shoulder view throughout the game. It's also confusing at times, with the game's core mechanics not helping in places you feel it should. The gameplay is completely exhausted by the end of the first world.

Several books, comics, and movies make up the Bionicle LEGO story, and where that story has disappeared to no one will ever know. With such source material, it'd be quite easy to tie some of it in, but no. You'll have the game set up by a brief narration at the beginning, and that's the extent of it. The only other advice you'll hear the rest of the game is a few grunts from the enemy Piraka in cutscenes, you'll have to decipher the rest. Starting on the island of Voya Nui in an elongated tube, a demented little robot kid hooks you up with a couple masks that give you different elemental powers. From there, you'll explore six themed zones including stone, wood/forest, ice, fire, et cetera. Once you defeat the six enemy Piraka, you'll recover the final mask--- the Mask of Light.

The gameplay consists of running around the level blowing up everything you see. You collect gears and junk which turn out to be the currency in Bionicle land. All the levels are extremely linear, one even leading to the next, as to completely revoke thought process. LEGO pieces are scattered throughout the level and will give you money (gears and stuff) when blown up, as do enemies. Different sized junk gives you an array of point values, ranging from 10 to 250, which you'll then be able to spend on upgrades and unlockables in the Matoran Enclave, or 'home base' that connects all of the level entrances. You'll eventually earn more and more masks thus enabling you to switch between them at any time. Each mask has a different style weapon, none of which are extremely relevant to their respective element. Each mask/character also has their own life meter, and you can lose that character if they were to die off completely. Each character also has special powers such as constructing objects or walking on walls, thus enabling you to gain more LEGO pieces. You'll also be collecting gold and silver Toa canisters, some being inaccessible until you go back through the level after you've found the appropriate mask. Each regular level includes five silver canisters and four gold canisters, and boss levels include four gold canisters apiece. Finding enough canisters as well as passing zones and bashing bosses earns you the right to visit the trophy room, where you can read through the large gaps in the story.

Bionicle Heroes is not only plot deprived, it's also victim to a horrible feature called Hero mode. This is essentially activating an invincibility mode for a short time. Hero mode activates automatically once you've picked up a certain number of LEGO pieces, thus it is intended to not be under your control as to when you activate it. Hero mode, once activated, deems you completely invincible to all damage and lasts until you activate the giant golden statue to access the next area of any given elemental level. Thus, by rationing selective amounts of LEGO pieces, you'll successfully be invincible about half the game. If you were to die, as mentioned, you'd simply lose your currently equipped mask and receive a full bar of health. Replacement masks are easy to find though, as they are scattered around the levels in every other corner. Not that you'll really need them. Boss fights are also unbearable drone work, predictable in every way imaginable. Even the location of bosses is predictable, coming at you after the first, third, and fourth areas of each elemental zone, thus totalling 25 levels and 19 bosses. Killing a bunch of minions to activate hero mode works just as good as before, then all that's needed is to activate a conveniently located golden statue to kill the boss. It's so unsatisfying after the second time, it's almost anti-satisfying.

Most will probably like to believe that humour that pokes through is intentional, but for the most part, I don't believe it is. The cut scenes themselves reek of unintentional hilarity at times, as does the sheer madness of running around LEGO pieces with such simple gameplay yet still confused on what to do. Unlockable content found in the Piraka Playground is also fun, such as Piraka that have been defeated in different stages that are no longer harassing Voya Nui island locals but instead building sand castles. These scenes are pretty funny to skim through once, but they are short. Three bonus stages are also available, all of which are two-minute missions to see how many of a certain robot type you can kill. With no fun factor, you might as well pass these, unless you'd like to earn a few of the "kill this many" achievements.

Also, if you're going to play through for the points, be sure to look through them all and know what you're looking for as to get the full 1,000. If you don't, you can probably still achieve about 700 or so. Aside from gamerscore, there are no online features. No multiplayer, or co-op, or battle mode either; all of which would be beneficial.

Visually, Bionicle actually looks decent. Again, its main camera view is horrid, but it's blurring and shot effects are actually quite decent. The different elemental environments are decently detailed despite their linearity. The Bionicles themselves are a little low key and don't really move gracefully. There's nothing like damage effects or anything, which seems a little low quality. They made decent use of bloom lighting as well as depth of field and tons of motion blur. Unfortunately, the bloom lighting and motion blur are often overdone to the point of being an eyesore. Luckily, the latter two can be turned off. Audibly, Bionicle barely can state it has a soundtrack or score. It's flat out terrible, totalling about five minutes of actual audio content at most. But as long as you're in hero mode, you'll be listening to the best two of those five minutes. Thankfully on the Xbox 360 version you can turn this all off and listen to your custom soundtrack.

Bionicle Heroes is without a doubt aimed at a younger audience. Yet, with such lack of challenge, innovation, and story development, even an eight year old could see through this one. The plot is unnecessarily thin and the poor implementation of such a great base idea is a shame to see, but it is what it is. I cannot recommend this game for adults, kids, or even a rental, unless you plan to find humour in a so bad it's good kind of way.