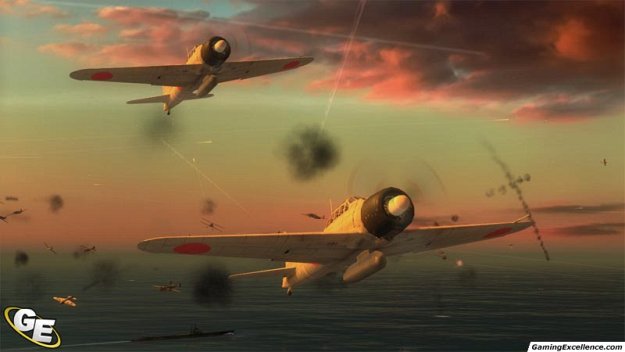 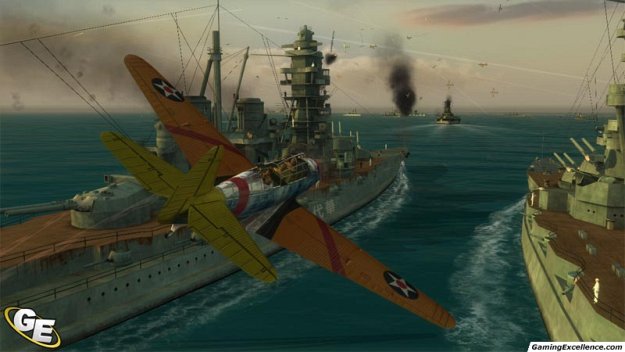 Especially on consoles, real-time strategy titles tend to be hit or miss. As the genre has matured on the PC platform, it's snowballed up a wealth of features that have hardened into conventions: squadding units together, juggling resources, setting waypoints, and so on. Giving the player the tools to cleanly manage these details is a difficulty for any Xbox 360 developer, but the folks at Eidos Hungary have done just that in Battlestations: Midway, forging a title that treads the line between paced, thoughtful tactics and immediate, hands-on action very well.

Battlestations brings an eleven-mission campaign that swims through some of the more important sea skirmishes preceding Midway, including Pearl Harbor and the battles of Tulagi and Coral Sea. Stringing them together is the pseudo-fictional story of Henry Walker, a naval recruit that rises to captain the USS Yorktown by the close of the campaign. The pre-rendered sequences that bookend each mission are presented well. Even if their dialogue pulls from every World War II naval film it can, it fashions a decent context for the (very good) gameplay that follows.

Eidos thankfully forgoes complicated escort missions and other elaborate objectives for straightforward, but still very difficult scenarios. Mounting an air raid while fending off enemy destroyers? Sneaking a pair of subs under the sonar to sink a valuable aircraft carrier? Tough. But situations like these are probably where Battlestations excels best: matching the player with challenges that require competent planning and execution alike. Luckily, the tools the game supplies are more than enough to get the job done, and with fun, at that.

You'll spend a good portion of your combat time surveying the sea with the game's overhead map, activated with the back button. Here, a simplified grid shows unit positions, movement patterns, terrain, and even tracks incoming torpedoes at its highest zoom level. The top-down view is the easiest position to direct your overall battle plan, and switching between units with the directional pad and moving them about with a quick tap of the A button is an effortless process that deconstructs some of the natural tension the Battlestations pours on.

Outside of the overhead map, it's still a breeze to command individual planes, ships and submarines in the third person. The left analog stick steers rudders and controls the throttle, and the respective triggers fire and switch between available weapons. Getting behind the flight stick is a tad tricky at first, with the right analog used to pitch your plane about and the left counter-intuitively reserved for engine commands. Still, a great aspect of the controls overall is that they can be handed over to the AI at any time -- effectively allowing the player, if they please, to take a commanding role and let the computer sort out the dirty details of combat.

Units themselves are varied enough to encourage different strategies, but not so diverse that they overcomplicate things in the field. Battleships mount long range artillery, destroyers are mobile, versatile anti-sub hunters, PT boats cruise around as scouts, and carriers launch forth fighter and bomber squadrons. A handful of missions feature land-based airfields and sea pens for deployment purposes, though the latter are underused. Weapon use is likewise kept simple, but is a fun challenge to master. Leading oncoming cruisers with artillery at a mile or more is difficult, even when eyeing them through binoculars, and pegging an enemy ship with a torpedo is harder than it seems, mostly because the AI does everything it can to avoid them. But pummeling enemies with imprecision is part of what makes the gameplay feel so right. You're constantly positioning your ship to line up an ideal gun configuration, or passing under an enemy vessel to fire off your sub's rear torpedo bays. Other details, like having to drop a plane-delivered torpedo from a low altitude so it won't explode when it hits the water, periscopes, and correctly timing a sub's re-surfacing to refresh its oxygen supply add the right amount of authenticity and help break up the gameplay.

Aside from piloting, gunning, and commanding, damage management for individual ships is the other real-time concern you're juggle. Ships can suffer from three different hull woes: fire, leaks, and the malfunctioning of primary systems like your engines or specific gun turrets. While ships thankfully apply repairs on their own, the left bumper's damage menu lets the player appropriate crewmen to the systems they feel need the most attention. Eidos did well to make this system function identically for your enemies as well, as damage isn't simply incurred statically -- hits to different sections of the ship will light a fire on deck or disable weapons, and if you let an injured ship rest it'll recover some of its hull damage slowly.

The single-player offering is satisfying thanks to these well-integrated components. Eleven missions is a tad short, and most of them are very specific: there isn't necessarily a battle that has you managing every aspect of aquatic warfare all at once. Ten specialized bonus sorties help balance this out, however. Here, you'll command Japanese forces in sticky situations, like guiding a battleship toward a waypoint past an dozen-boat fleet. These focused side-missions help round things out and give players a chance to play from the other perspective a bit, with an emphasis on individual units over managing a whole battle scene. But even if a few strategy enthusiasts see the single-player campaign as shallow, they'll find little to complain about online, where up to eight players (four to a side) can face up on ten unique maps.

Battlestations' blend of action and strategy floats nicely to the surface over Xbox Live, thanks in part to how encounters are constructed. In the lobby menu, players select the pair or more of units they'd like to command in the reenactment. One user might prefer to play with planes, while his teammate might be an ace sub pilot. It's great how Battlestations makes room for this kind of varied cooperation, and if you can wrangle together a group that communicates well, it's a blast to try and build a strategy together from start to finish. Our only qualm might be that there isn't a distinct pre-planning area to talk tactics with your teammates.

Where the gameplay shines, Eidos delivers a decent stock of presentation to convey it all. HUDs and other interface elements sport an aluminum, pre-digital aesthetic, and the audio captures everything from sonar pings, depth charge drops, and the distinct hum of dive bombers pretty well. The ships themselves look solid too. Not photorealistic, but great models of the real deal complete with crewmen that mill about the ship, guns that rotate with your crosshair, and real-time damage representation. It won't blow you out of the water, but it's enough to submerge the player in the naval action.

Few titles attempt a real-time strategy/action hybrid, and even less actually succeed. The precision of point-and-click may be the time-honored interface for tactical games, but Eidos Hungary has produced an excellent, landmark entry for the genre on consoles. The accessibility of the controls at each level of naval warfare caters to the casual commander and old-time maritimer alike, mostly because they invite the player to freely perform the battle actions they choose. It may lack a fleshed-out campaign on par with its competitors, but Battlestations: Midway supplies enough gameplay depth to make it a unique title that won't leave you with a sinking feeling after purchase.