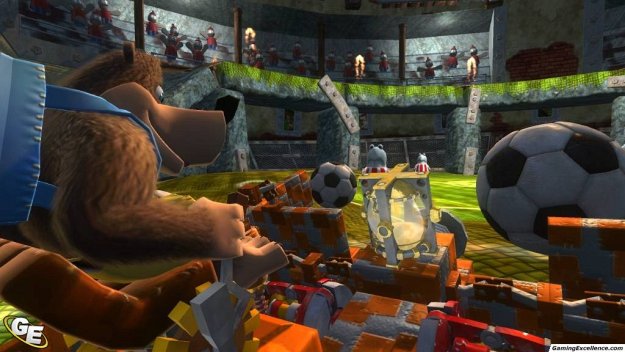 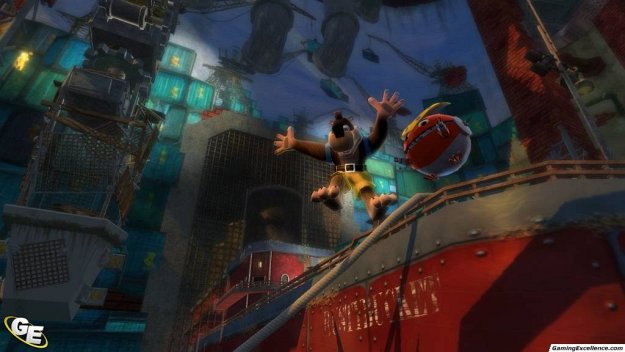 Perhaps this one is really truly my fault. Maybe, just maybe, I'm asking too much from video game developers these days. Hearing that a new Banjo-Kazooie game was being released, perhaps I put my hopes up far too high. Nintendo continues to release Mario 64 on each successive console with a new gimmick and it's always heralded as the second coming of the video game messiah. They're not really doing anything too drastic with the games, nothing that can't be replicated by other developers. So why can't Banjo-Kazooie work out the same way?

The answer is both simple and devastating to the fans of the series. Rare has seemingly lost their spark. We remember that spark; the spark that gave us the original Banjo games, Killer Instinct and Goldeneye. All they seem to have left these days are games where you collect item after item to progress through increasingly boring levels. Yay for collectathons?

While the storyline in these sorts of game is usually the flimsiest of excuses Nuts & Bolts tries to vary it up by being incredibly self-referential. So self-referential in fact that the premise is the bird and bear are over the hill video game mascots who are woefully out of shape only to be dragged into a new game designed by some weird creature named L.O.G. The game noticeably pulls from other Rare titles while referencing plenty of pop culture and other video games in the process. Essentially it's just a self-aware version of many modern video games.

Banjo-Kazooie works like most other straight up platformers in almost all ways. You start out in a hub world with doorways to the other lands where the missions take place. As you collect the McGuffins, called Jiggies, you will unlock doors that lead to various missions across the game worlds. Sound familiar? It should, this is about as played out as it gets. One of the ways that the game tries to deflect criticisms of this archaic gameplay is to try and poke fun at itself for it. Here's a note: self-referential humor is only funny if you're not being forced to go through with the point of interest. So just because you poke fun at N&B for being such a typical video game doesn't make the fact that it's such a typical video game any less annoying.

The big difference between every other platform and Banjo-Kazooie: Nuts & Bolts is that of the vehicles. Basically you get a whole bunch of vehicle parts that you can use to create anything your imagination can come up with. Boats, race cars, tanks, helicopters and planes (or any combination therein) and before the game is over you will need many of these to complete the missions laid out before you. This is the point that Banjo-Kazooie hinges upon - how much you enjoy the vehicles is going to determine your ability to enjoy playing through this game.

When you start the game the vehicle creator won't seem like anything all too impressive. But as you gather more Jiggies and explore the world you will collect more parts. As time goes on you will eventually be able to build whatever you desire and save the blueprints for later access. The game does a decent job of providing you basic blueprints if you don't feel like messing with this but you're losing out on the only really interesting part of the game. Towards the end of the game you can craft some serious death dealing machines with a bevy of gun, retractable wings to turn your car into a plane at will, floaters to stay afloat in water, propellers to make a helicopter and seats that let you stay underwater like you've got a submarine.

Crafting a vehicle is all fine and dandy but controlling them is another matter entirely. Even the best of vehicles have dubious controls, sometimes too responsive and others not responsive enough, while the lesser vehicles control like pure frustration incarnate. Playing the early part of the game is one of the most aggravating video game experiences in recent memory. Trying to place an object in your vehicles carrying tray and then driving across a simple map is actually far more annoying than it needs to be for a variety of reasons.

First off if you so much as touch anything in the environment then your vehicle will either turn into it or just stop. So if the tip of your vehicle hits a wall, or another vehicle in a race, you'll almost always get tangled up on it and stop entirely. There's really no system for a vehicle to bounce off of an impediment like in most other racing games and this is a serious problem. Of course the problem is only made worse by the enemies that exist only to bump into your vehicle and press you into walls, enemies that wouldn't be an issue if the controls weren't so poor. Top this all off with the fact that the helicopters have some incredibly annoying controls and you're left with only planes that are very responsive.

With the vehicle system so seriously gimped it's pretty hard to take the game anywhere else. That's literally all there is to this game; the platforming is useless for anything other than collecting notes to use as currency. So what do you do with a game where the main focus of it is so horribly flawed? Well you could take it online and compete is some challenges against other players in a variety of interesting modes but all the same problems persist. Although, in fairness, it's a lot more fun to get beaten in a competition by somebody who has a gigantic tank of rolling death they made themselves than a CPU opponent.

Other than the vehicle system there isn't anything else to talk about with Banjo-Kazooie. Mediocre graphics, mediocre music that seem to be remixes of older themes from previous titles and, well just general mediocrity make for a title that's hard to recommend. This is one of those rare games that isn't horrible but has almost nothing to really praise. It just kind of subsists in its own weird video game niche. I suppose that's got to count for something, right?