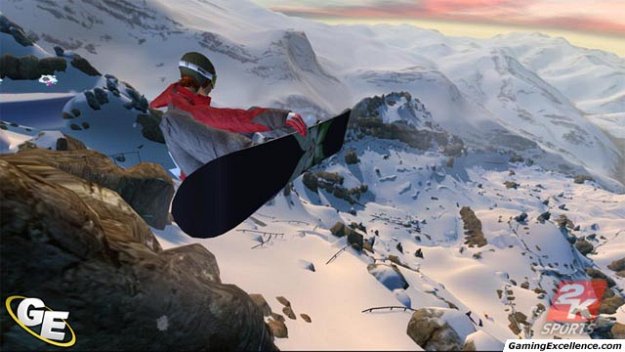 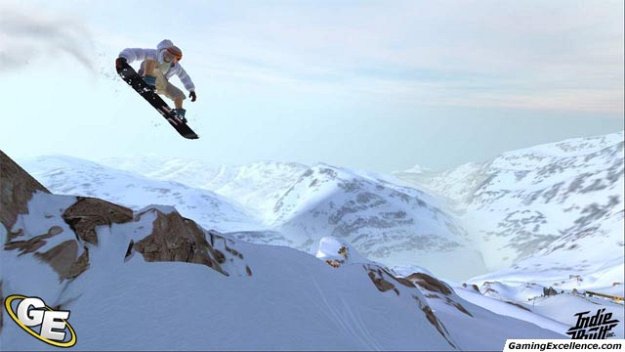 At Microsoft's X05 event in Toronto, Canada, one of the 360 titles that 2K Sports was proudly demonstrating was Amped 3; a series that was previously part of Microsoft's own XSN line-up. Regardless of your previous experience with the Amped series, the SSX series or just alternative sport series in general though, you are truly in for a surprise with the "new and reenergized" Amped 3.

After a twenty minute preview of the new features in Amped 3, I finally managed to get my hands on a controller to try it out for myself. The most obvious change is the new level size; it is without a doubt the largest of all Amped games and to simply give you an idea of the dimensions, the 2K Sports representative confirmed that one of Amped 3's seven levels (spanning five countries) was large enough to encompass all of the runs from Amped 1 and 2 combined. They may not all be this big, but there is definitely a lot more snow to plow across. New moves added were snow carving, smother butters and auto rail attach to list a few. The snowboarder in Amped 3 is also now less likely to crash since they've adjusted the way you lay down your moves. Grabs on your snowboard are no longer mapped on the right directional joystick; they're mapped on the X, Y, and B buttons. With this decision, I find, you can make more cool tricks and also get higher style scores on your board.

Amped 3 also features steeper hills/runs than ever before. This gives you more air and speed to lay down the combos and moves that you have been wishing for. The game designers even thought that you may want to travel to another spot on the mountain to try out different runs/hills so they've included a snowmobile for you to maneuver around on the map (available at all times). This is just one of the many new methods of transportation that has been included in Amped 3; others are the hand-gliders and sleds. You can also use the snowmobile to do tricks, building up points. They have an entire snowmobiling point scoring system that keeps track of everything from trick high scores, distance traveled, crashes etc… The hand-glider is also fun to use, but requires a little more skill to master fully. Essentially, the point of the hand-glider is to launch yourself off the mountain and release your body into the most hazard-filled area and make a good rag doll out of yourself. The further you fall, more obstacles you hit and the longer it takes you to come to a halt; all-the-while building up your score. Amped 3 also offers a great park builder, allowing you to customize parks in order to get your high score to unimaginable heights. Moving stuff around and adding ramps has never been so easy. This is definitely something to look forward to!

"Again Amped offers up more fresh tracks than any other game ever made" is a quote directly from the 2K Sports website, and they don't lie. With over 300 songs offered in Amped 3, you will definitely never hear the same tracks over and over again. 2K Sports put a lot of time in selecting nothing but the best tracks to ride down the snow with. And for the music-curmudgeons out there, user soundtracks will also be supported allowing you all the aural options you desire. And, as with previous Amped titles, the soundtrack is completely controlled on the fly; so if you're listening to a song you don't like, you have only yourself to blame. The playlists are fully customizable and music is listed by songs, bands and even music labels making this without question one of the best musical experiences at X05.

Amped 3 really takes full advantage of the new Xbox 360 hardware and will completely blow fans away with its amazing graphics, shadowing and landscapes. Level designers also paid close attention to every detail in the game which made me feel like I was actually on the mountain. The game play is smooth and has a steady rate of play without as many interruptions as the previous titles. Showing off to your fellow Amped players has never been this easy either; 2K Sports included Xbox Live capabilities again in this title and has included a counter that shows you the high score of other boarders online. So if you get a sick score, your score will be on everyone's mind going down the hill.

An all around great title and unquestionably the best Amped title to hit a Microsoft platform. Amped 3 should also be available for purchase 3 days before the official launch of the Xbox 360, so definitely look out for this title at a store near you. You don't want to be left out in the cold without a copy of Amped 3 do you? Happy boarding to all and I'll see you on the slopes.