The Sims Bustin' Out (Xbox) 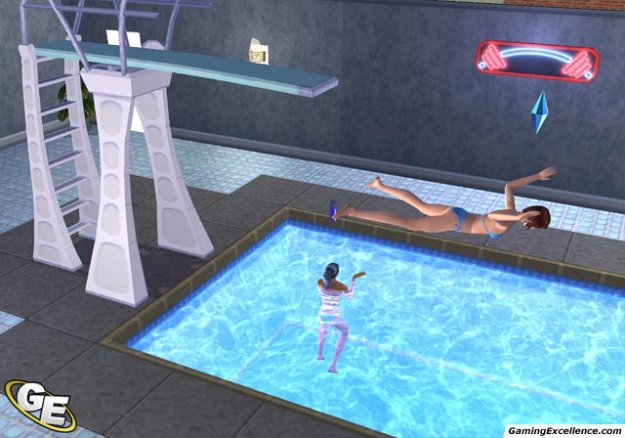 Welcome to the world of the Sims. Create and customize your Sim to fit your personality, and then take them out into the world. Choose from many different careers and work your way up the corporate ladder, to finally earn that dream house for all your hard work. As a Sim, your needs are paramount. Buy that new TV and watch it for hours, fill your stomach when you are hungry, or even satisfy your lust for love through socializing with neighbours or throwing parties to meet that special someone. Everything that you can do in reality can be done in the Sims.

Developed by Maxis and published by Electronic Arts, The Sims Bustin' Out is the second generation of the series to come to the consoles. It makes an attempt to give players the experience that previous Sims titles on the PC have to offer, but it comes up short, and is really a step in the wrong direction. The Sims Bustin' Out doesn't offer anything revolutionary to the series and for those who do have a PC powerful enough, you would be better to pick up the Sims Mega Deluxe pack, or even the next-generation Sims 2.

The Sims Bustin' Out is similar to the classic Sims franchise for the PC, with the addition to being able to focus more on a single character and their daily life, as well as managing an entire family. Players start off with very little and have to work up to corporate ladder to buy new items and develop the house of your dreams. Your sim can change careers, buy new items, and unlock options, offering a lot of replayability, but you may not want to commit that kind of time as the gameplay can become stale very quickly. In Bustin Out' you follow the life of a Sim, and guide them along the way. This means you are responsible for directing your Sim to do everything from taking out the trash and cleaning up messes, to turning on the TV, to getting up for work every morning. If you don't mind giving monotonous repetitive orders every day, then you may just enjoy this repetition. Much like the Tamaguchi Pets children had years ago, or even the ever popular Pokemon series by Nintendo, The Sims Bustin' Out gives players a character they can take care of, watch grow up, and help succeed in life. This addictive quality however is the games only saving grace.

Presentation is one aspect in which previous Sims titles have always succeeded. The manual is simplistic and easy to read, and the opening sequence is well-developed. Game menus are also pleasing to the eye. However, once you actually get into the game, the experience goes downhill, as the weak in-game graphics and even worse audio may just leave a sour taste in your mouth.

Visually, The Sims Bustin' Out is surprisingly weak. With fairly powerful technology available on the Xbox, one would think that the graphics could have been significantly more detailed. Character models are really lacking, and while players get to choose from so many unique items and clothing, you'll likely not even really notice it. Because of the camera perspective and lack of zooming, you can barely notice these details. In fact, the only time you'll get an opportunity to take advantage of the character models are during a special event, such as a promotion at work. It should be noted that Sims Bustin' Out does improve on the character models from the older Sims titles, but it's not much of an enhancement. In Bustin' Out, it seems that most of these models look identical. This leads to a detachment between player and Sim as your character resembles the ones that are computer controlled. In addition to characters, object detail is also further refined in the PC series. From wall hangings, to paintings, to even images displayed on the TV, Bustin' Out fails to utilize the Xbox's capabilities, which is really quite disappointing.

Being fairly new to the Sims series, I can say that I was really not impressed by the audio in the title. Music seems very basic, simply computer generated. Maxis could have really improved in this area, especially considering EA's sports titles always have professional music talent. It would have been impressive if they had some professional Hip Hop or Rap artists for this title. After all, Bustin' Out gives the impression of a newer and "hipper" Sims title. However, it is rather interesting that players can change the music by using a purchased sound system in the game, like a Juke Box.

The Sims Bustin' Out offers players a wide-range of sound effects, from bulbs breaking, a bus horn, various alarms, and even an assortment of environmental effects such as running water. Aside from these basic sound effects, Bustin' Out also has alerts to make the player aware of certain events. For example, when an appliance breaks down, the player is alerted by one of these unique sounds, however they can become stale very quickly. One of the most popular areas of the franchise is the language used when two Sims are communicating. This "gibberish" language has been present in all-previous titles, but becomes extremely repetitive as time passes. Many players can look past this by turning down the volume, and in the end Bustin' Out might actually play better with the volume low.

Gameplay is Bustin' Out's saving grace. The addictive nature of the game can keep players coming back over and over again. Players take a character of their own creation and guide them through life. Buy them books and teach them how to cook or repair broken appliances, or purchase weight lifting equipment and enhance their strength. The Sim is so dependant on the player that most of the actions they will take have to be given to them directly. This includes going to the washroom, eating, sleeping, and catching the bus to work. After a while, all this work and attention can become overly aggravating. It would have been nice if the Sims had more of an adaptive learning pattern. That way, after telling them a million times to flush the toilet after using it, they would do it themselves. Even with types of problems, Bustin' Out isn't a total letdown. Bustin' Out offers a very enjoyable multiplayer mode, where you can live out real-life scenarios such as marriage. In fact, the two player option is likely the strongest part of this game, adding hours of gameplay to this repetitive title.

The Sims Bustin' Out offers players two modes of play, both "Bustin' Out" and Free Play. Bustin' Out mode is goal-driven, forcing players to complete tasks to unlock objects like furniture and new clothes for their Sims. This mode also helps introduce newer players to how the game operates. Free Play is where players will spend most of their time. Create a family, build your own house, and set your own goals. There are also many more career choices available in free play. This may mean very little, especially since all careers seem to start out the same. Your Sim goes to work at a certain hour then returns home at another. Basically, the only real use out of this process is for obtaining money to buy items for your Sim's house. In any event, the gameplay in Bustin' Out is very limiting. Players are confined to the house they are living in, and those which they can travel to with their vehicle. This is rather disappointing since the neighbourhoods in which players live are full of things like basketball courts, which should be available. In an age where video games allow players to interact with almost anything they see, Bustin' Out comes up very short. All in all, gameplay is the only strong point of this game, and that really doesn't say too much overall.

Replayability is definitely an issue left to opinion. The repetitive nature and the limitations in Bustin' Out mode might not hold your attention for long. With that said, the multiplayer aspect of this game might actually keep players interested for a few extra hours. With that said, Sims fanatics may really enjoy the "goal-oriented" gameplay or even "free-mode" in Bustin' Out. In any event, the title is lacking feature-wise to maintain the attention of the average player.

Overall, the Sims Bustin' Out fails to deliver anything new to the series. With weak visuals, audio that is rough on the ears, and repetitive and restrictive gameplay, Bustin' Out is not a game that withstands the test of time. If you are truly looking for a great Sims game, pick up any of the many available for the PC. It offers much more than Bustin' Out ever could.