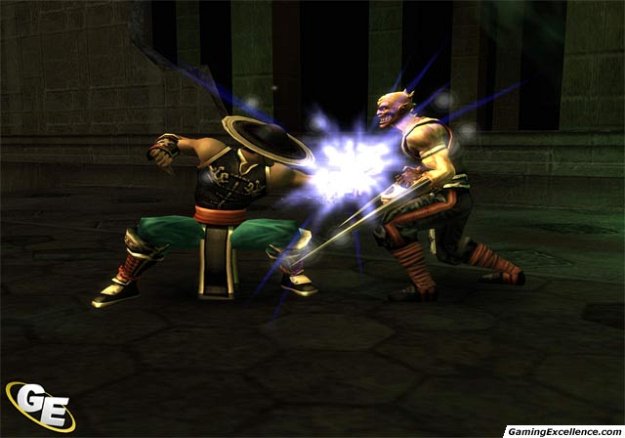 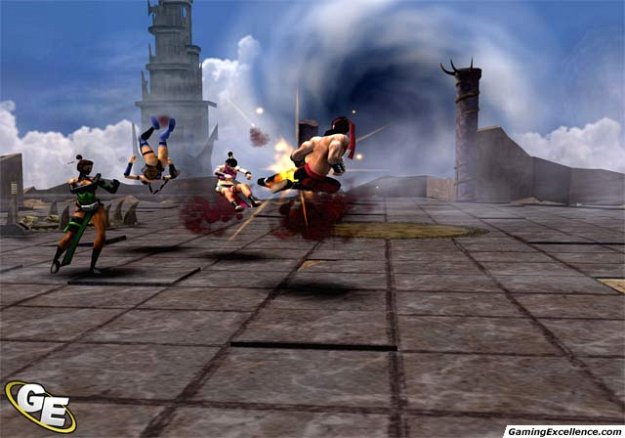 Mortal Kombat is one of the most popular games from the arcade era of the 90's. The fighting system was innovative and the brutal ways to kill your enemies "with fatality" were challenging and fun to watch. Over the years, Midway has released a few new titles to continue the franchise, notably MK Deadly Alliance, Deception, among others. This time around, Midway is trying to take the legacy in a new direction with Mortal Kombat Shaolin Monks for the console market. Unlike the previous iterations, Shaolin Monks is not a pure fighting game but an action platformer that feels a lot like a fighting game. And if the amount of fun I had with this one is any indication, that's not a bad thing at all.

The story for Shaolin Monks is a little different than the previous games. This time, Shang Tsung tries to invade Earth realm after losing the Mortal Kombat tournament to Liu Kang and his buddies. In doing so, he's defying the elder gods and it's up to you to find out what's going on. The story seems a lot more fleshed out than in the previous incarnations of this game and it does have a couple of unexpected surprises. It doesn't feel like it's just there for no reason and actually helps the gameplay a lot. Various cutscenes also accompany the story and do a very good job of moving the plot forward.

In Shaolin Monks, you can play as either Liu Kang or Kung Lao, with the possibility of unlocking other characters as the game progresses. There is a single player mode where it's just you against the hordes of demons, or you can partner up with a friend in co-op mode. Shaolin Monks also impresses in the co-op department. Instead of taking the easy route of just putting another character on screen and having the same gameplay mechanics, Shaolin Monk's co-op played has a number of special features. Some of the puzzles in the game can only be solved with the help of a friend in co-op mode. Not only that, but the game has special moves which can be performed with your partner to lay waste on the demon enemies. These include grabbing your friend and throwing him at people, launching a fireball at your friend so he can deflect it at various other targets and more. This tag team experience adds a whole new strategy to fighting enemies and makes the game a lot more fun and rewarding to play. If you're a big fan of Mortal Kombat fighting and you want to battle against your friend, the game also offers a versus mode. And believe me; after seeing your friend perform some stupid moves during co-op mode, you'll want to smack him around for some time.

As far as graphics go, Shaolin Monks does impress. The environments seem really polished with destructible objects and various other environment effects. From earth realm to outworld, the game has some pretty impressive environments, which try to emulate games like God of War and Ninja Gaiden. The environments look very original and fit really well with the Mortal Kombat theme. Things like spikes and environmental hazards really add to the experience and can be used to your advantage during gameplay. The level design does seem a bit linear but it does allow you a fair amount of freedom as far as back tracking to acquire new secrets. The character models do feature good movements and the animation is fluid. I did experience some slow down in the game when I played against multiple enemies and had a torch right in front of the camera but that was the only instance and it was quite brief.

The sound for this rendition of the Mortal Kombat franchise is good, but not great. The problem with the sound comes mostly from the sub par voice acting in the game. And the constant "yaaa" screams from Liu Kang (a la Bruce Lee) can become really annoying at times. Every time you do any move with Liu Kang, he will scream "yaaa" for your auditory pleasure and seeing as how combos can get fairly lengthy in this game, you'll hear the "uataaa" lines a lot. The voice acting is very average and sounds a lot like the translations done for Japanese animation here in North America. I also noticed at one point in the game, when you have to cut some chords to release hot tar on enemies, that the action played out on a cutscene had no sound. Those are really the only issues I had with the sound in this title, and this is really nitpicking on my part. The sound effects of the game are well done and the music is standard Mortal Kombat fanfare.

I have to say the gameplay for this one really surprised me. I was skeptical at first about the idea of an action game based on the Mortal Kombat franchise, but the transition by Midway really came through in a big way. As Liu Kang or Kung Lao, you have access to a number of combo moves right off the bat, which can string up into massive damage dealing combos. You also get a variety of special moves, which require energy in order to perform and these include fireballs, hat throws, special grabs and others. The ability to block an enemy's attack is present as well but blocks consume energy from your energy bar. So if you block too much, the enemies will still rip you to shreds. The game also features an experience point system which gives you experience for killing enemies. But if you string up some combos on multiple enemies, you can multiply your experience manifold depending on how many hits you can perform in a row. The experience does not level your character up but it does allow you to buy extra moves for your character such as enhanced fireball attacks, kick attacks, and even new destructive combos. This is a great system but I did find it fairly easy to get a lot of points from the beginning of the game on weak enemies by doing massively long combos and get the multiplier up to 30. While the rest of the game does seem balanced and doing long combos require a fair amount of skill, long combos in the beginning of the game are fairly easy to perform and can spoil the experience a little bit.

The game might also seem a little easy at first but the difficulty does get higher as you progress. There's also a hard mode to choose if you really feel that the enemies pose no threat to you. As the many enemies come at you, the game also gives you a fair amount of choice on how to dispose of them. The environment in Shaolin Monks plays a huge role in the gameplay and enemies can be thrown at catapults to solve puzzles, thrown at giant man eating trees, spikes, spiked ceilings, and a number of other hazards. There are almost too many ways to kill enemies in Shaolin Monks. Not to mention the fatalities you can perform by building up your fatality meter. Not only that, but the game also offers you different kinds of fatalities from your standard "pull the head off the guy" move. Multalities let you kill a number of enemies on screen at once and works much the same way as a fatality. On the other hand, Brutality gives you superhuman strength for a short time and unlimited energy so you can lay waste to all enemies on the screen easily. The catch is, the only things that give you experience are the fatalities and fighting, so the others are best reserved for places where you really feel cornered by the enemy. Now that seems like a lot of ways to kill an enemy but I still haven't mentioned one. The game allows you to use weapons like swords and ice picks to hack away at your enemy. You can also pick up rocks, pieces of wood, or the weapons I mentioned and throw them at your enemy. While the rocks only cause some damage, a sword thrown at your enemy will remain stuck in him and he'll keep losing blood as the battle rages on.

Aside from the great combat play against normal enemies, the fights against bosses are truly epic. When fighting reptile for example, before you fight him, you must kill a huge snake and solve some puzzles along the way. Even after you do that and begin your fight against reptile, he'll turn invisible after receiving a fair amount of damage and this makes the battle far more complicated, as you'll have to pay attention to signs of his presence to reveal him. Almost all boss battles follow the same style of challenge and it does make for a very entertaining experience. The fact that you can also unlock various movies, concept art, new arenas for versus play and the original Mortal Kombat 2 game, makes it all the more worthwhile to revisit some levels with new powers that you have gained or with a friend in co-op play in order to collect all the secrets.

Overall, this game has a lot to offer to action game fans. Combined with great gameplay, Shaolin Monks has good story and tons of replay value. Not only that, it's incredibly fun to play with friends in co-op or versus mode. If there's one thing missing here it's Xbox Live support, but even as it is, Shaolin Monks surpasses expectations on all levels. The game could be a little longer but the amount of time you'll spend with Shaolin Monks is packed with fun moments. It's a new direction for the Mortal Kombat franchise and round one is a success. If you like Mortal Kombat, if you're an action fan, or if you just like a game that offers you incredibly brutal ways of killing an enemy, Mortal Kombat Shaolin Monks is definitely a game to pick up.