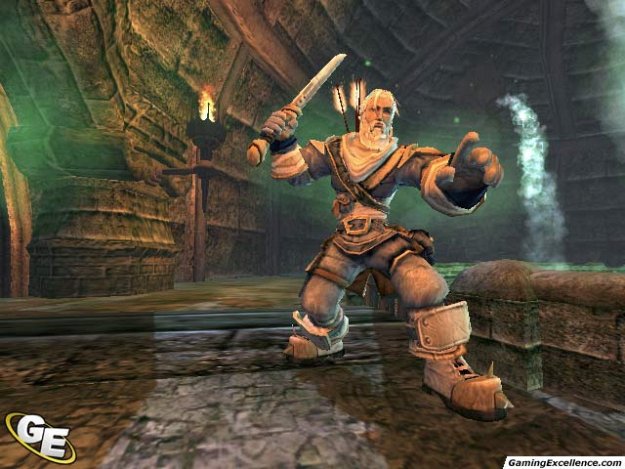 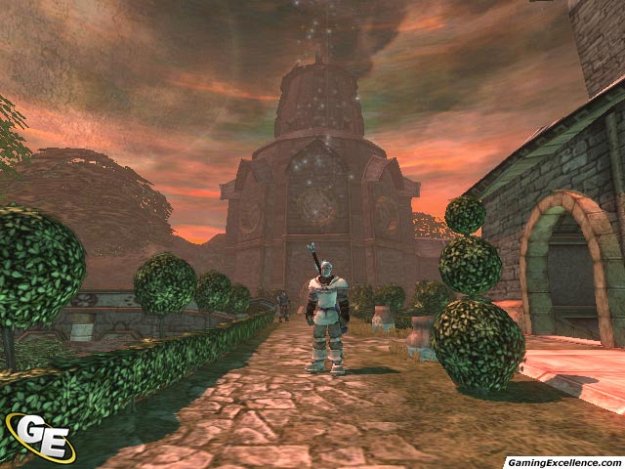 After many months of anticipation, Fable was unleashed to an Xbox crowd desperate for a good RPG. Published by Microsoft and co-developed by Lionhead Studios and Big Blue Box Studios, Fable offers a variety of unique ideas not seen in past RPG's. One of the big selling-features of Fable is the ability for players to choose their own destiny. Each action you take impacts your character and the world around them. Good or evil, the choice is yours.

The story of Fable is highly engaging. It begins by telling the tale of a young child whose town is invaded by a group of evil men. His family goes missing, as the town burns to the ground. Eventually, your character is rescued by a wizard called Maze, who trains him to become a skilled fighter. Your mission is revenge on those who destroyed your family, and it will take all the skills and training you've got to get there.

The first twenty minutes of gameplay are fairly introductory. Players are taught to fight with a stick, cast magic, and shoot a bow. As the game progresses, your character develops and adapts to whichever fighting style you've selected. As an example, if you decided that you want your character to become a very aggressive fighter, their physique will improve as will muscle strength.

The game seems to progress really quickly. Within about thirty minutes, players grow from a child, through adolescence, and finally into adulthood. As your character grows they will have to complete a variety of different quests and tasks. Some of these tasks may involve escorting people to other villages, or helping out mercenaries in their battles. Although the concept of these quests is good, a few issues arise in the targeting system that can make completing them overly difficult.

Fable's targeting system is far from perfect. Combining this targeting system with a clumsy "follow orders" setup can result in a disaster for your character. Its quirky behaviour sometimes results in you accidentally attacking the character you are escorting, or a fellow teammate. For example, one of the quests involves rescuing a young boy held hostage in a cave. Once freed, you must escort him to safety, however this proves quite difficult. Around every corner you are ambushed from virtually all sides. When you try to attack all of these creatures, especially those close to the boy, you often end up slaying him by accident. This can result in frequent reloads, one of the more frustrating elements of Fable.

In addition to accepting quests, players can further challenge themselves by accepting "boasts". Characters can boast about their strength and agility by accepting challenges such as "remaining untouched", "no armor", or "fists only", among others. If the "boast" is completed successfully, the reward is usually in the form of money, experience, or character points.

The combat in Fable is quite unique. The engine allows for a variety of interesting tactics and strategy, such as killing blows, knockouts, and special moves that cannot be blocked by enemy armor. Unfortunately, the controls are poorly setup and difficult to master. For example, the button associated with special moves is also used for running. This can result in problems if you are trying to run away from a fight. Should you run out of that last healing potion, instead of running you may accidentally take a swing at your opponent. In addition to the controls, the camera angles in Fable are adequate, but could be further refined to allow for a wider variety of views. It would have been really nice to get a bird's eye view of the battlefield, but overall this element is acceptable.

Fable's impressive environments, AI, character customizations, and fine attention to detail sets the standard for future RPG's. The environments can be best described in one word, beautiful. Unfortunately, for every plus in Fable, there seems to be a tradeoff. Fables world is split up into many small levels, and the load times when traveling from one region to another is unacceptably lengthy. Players may find themselves traveling throughout between these regions a lot, which can result in a lot of waiting between levels.

One of the more unique elements of Fable is the ability to expand and grow your character. For example, in the world of Fable, your character can get married. Items such as wedding rings, perfume, chocolates and roses are common trading goods amongst shops. Players can also choose to purchase a house, whether it is to live in or to rent out to others. Fable rates your character with good or evil points as the game progresses, although in a few instances the balance seems to be off a bit. For example, murdering or attacking your married partner gives you 60 evil points, as to where divorcing or abusing your married partner gives you 600 evil points, certainly a strange balance.

The morality system in Fable is full of these strange balances. The overall design and marketing behind Fable was in this system, however the developers seem to have forgot its purpose in the overall vision of the game. A lot of good and evil points are not distributed properly, and the overall concept of character morality does not seem to tie into the big picture. It may affect how other characters behave around you, but it doesn't affect the type of quests or the real-progression of the storyline.

Although it may have its flaws, Fable is still an amazing game to play. The highly engaging storyline really keeps players busy. Although the entire game can be completed in about 10 to 15 hours, including the side quests, it is enjoyable enough to go through a few more times. Fable also offers Xbox Live support, where you can take your characters online. Overall, Fable is a very unique concept, is graphically very strong, and besides a few issues is a great game to play.