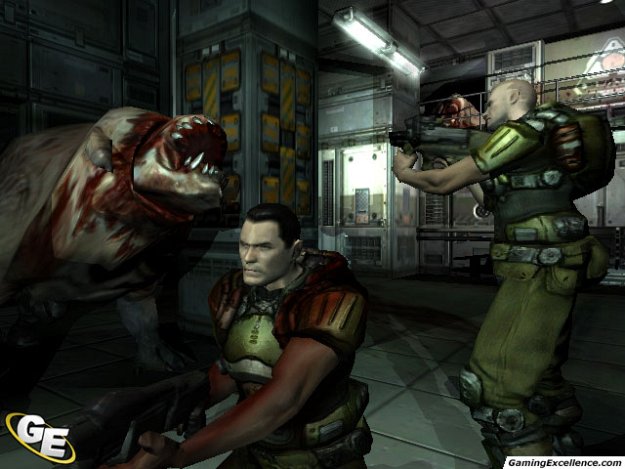 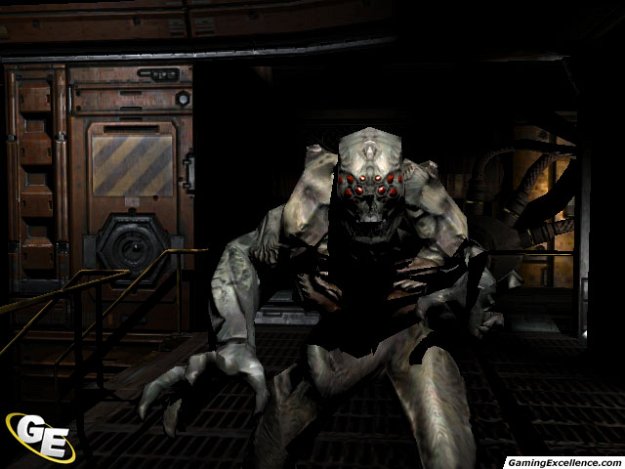 DOOM 3 is a game full of contradictions. For every one thing it does a certain way, it seems to do another in the completely opposite direction. One step forward, one step back. Steady as she goes. Status Quo on all fronts. Does this make it a bad game? Absolutely not. It's just a little hard sometimes to describe it sometimes. DOOM 3 is pure old school gaming stuck in the trappings of modern technology. If you are looking to dual wield some weapons or drive vehicles or explore vast open areas or play through branching paths or be bombarded with cut-scene after cut-scene, you'll have to play another game. If you are looking for some slick run and gun action, a few scares along the way and quite possibly the best looking game ever created for a console, than by all means, DOOM 3 is the game for you. It's not a perfect game, but at the end of the day, Hell has never looked so good.

id Software was obviously in an impossible situation. DOOM, along with Wolfenstein 3D, is considered the grand-daddy of first person shooters. And to think, this geezer is only slightly over a decade old. But in an era where Halo and Half-Life are the standards by which all other FPS's are judged, even a founding forefather flexing his capable muscle will have to do some magic to pull off a coup. It'll have to practically reinvent the way FPS's are played. Maybe even revolutionize multiplayer gaming as a whole. Give us something that has never been done before! Impress us! Wow us! Completely blow our freakin' minds! And what does id do instead? They go the other way and give us classic DOOM in a way that we never thought possible.

Let's get the obvious out of the way. DOOM 3 looks amazing. The girls of DOA may have more bounce per ounce but they have nothing on DOOM 3. In fact, it even looks as good (if not better) than The Chronicles of Riddick, and that's saying a lot. The folks at id and Vicarious Visions have squeezed what seems like the maximum amount of graphics power from the Xbox. While not as shiny as its PC brethren, the console version is still miles ahead of any other FPS of this era. And the strange thing is this: half the game is darkness. There is never one frame, one screen, one place that will not hide something in shadow. Is this a trick to make the graphics look so nice? Hardly. This is what DOOM 3 does best; it only shows you half of anything. There is nothing more nerve raking than the unknown, of not being able to fully see what is happening or what is coming up, and this is DOOM's gimmick. And it starts with its graphics.

The second layer is simple, make the game sound as creepy as possible. And yes, DOOM 3 sounds blood-chilling. From the slick menu audio to simply walking around in the game, there are some sounds that seem half-human to the ear. A simple laugh will never be the same again after you've heard it through DOOM 3's ears. The music, while not over-bearing, fits the game perfectly. You may not even notice it as you hold your breath in anticipation... That's how well integrated it is. On top of all that, the positional audio is spot on, and the overall audio mix is loud, booming and clear.

And then you have DOOM 3's most talked about feature, or lack thereof; Marines can't seem to find duct tape on Mars. And so, you can either use your flashlight to see what is coming up in the dark or you can choose to have a good ol' weapon drawn. The choice is yours... Many will curse this implementation and wonder why the developers couldn't just give you the best of both worlds, but honestly, what fun would that be? The game succeeds because it forces you to walk into a darkened room unarmed (or shotgun in hand but completely blind). This is DOOM 3's legacy, a full out attack on the senses, and it doesn't disappoint.

While many will have already played DOOM 3 on the PC and be quite familiar with its graphics and gameplay, what the Xbox version brings to the fray is an online co-op mode. Yes, this mode can only be played through Xbox Live, but it is a small price to pay after you've experienced it. To allow two people to sit in a room and experience it together would be to allow each person to feel a little comfortable. And as with all things DOOM 3, comfort is the farthest things from the developers' minds. You are now forced to sit alone in the darkness with your headset on and communicate with someone (maybe a friend, maybe a stranger) who you must trust enough to illuminate your darkness or be ready to annihilate anything that jumps out at you. And that is the beauty of DOOM 3 co-op; it is all about trust.

The co-op mode is a trimmed down, bare-bones version of the much longer single player campaign. You can start on any of its 20 levels (the single player campaign has more than double that) but the whole mode can be played in one 5 hour sitting. Just make sure you finish the single player campaign first so as not to have any of the story ruined beforehand. Also, the co-op mode removes all fetch quests (PDAs, locker codes, etc) and so you are left with the sweet and simple task of killing monster after monster. Dying is a small annoyance since the game can re-spawn you at the other end of a level, but is also well handled in the fact that another player cannot steal your backpack (with all your belongings kept in it). The other clever co-op trick is the fact that most power-ups (armor, etc) is color coded and can only be picked up by one of the two players. This chomps down on people hogging all the ammo or health packs. Is DOOM 3 co-op the end-all and be-all of online gaming? Certainly not. But it is a clever way to let players run through the game over and over again and it's a nice addition for those that may have already played DOOM 3 on PC and are looking for new features on the console.

The other reason for PC veterans to pick up DOOM 3 is the Collector's Edition that remains available in most stores. This version, available in a metal case, offers a single disc (just like the standard version) but which also contains an excellent port of 1994's DOOM 2 and of 1995's The Ultimate DOOM. While these games are starting to show their age, no one who has ever played them can deny the power they can wield. It's actually corny to admit, but I cracked a smile from ear to ear when I saw the first level of DOOM 2 again. It had been far too long. These new ports each offer 4 player split-screen modes as well as split-screen co-op modes. For the additional ten dollars, you can't really go wrong.

The single player campaign itself is almost identical to that of the previously published PC edition. A few locations have been moved around but for the most part it is the same adventure that should take most gamers approximately 18 hours to finish. While it does contain multiple difficulty levels, they seem to only change health and aggression. Fact: the A.I. is not smart in any way, shape or form, but it is aggressive. And changing the difficulty will make the enemy creatures and marines (who won't spend too much time ducking and hiding anyway) charge at you with ravage persistence and try to overwhelm you. And while the A.I. may not be as interesting as in some other games, it's still fun to play against.

In all modes, DOOM 3's controls are perfect. There are no "fancy" button layouts or anything else of the sort. DOOM 3 is all about shooting things and so, it's only fitting that the controls are laid out in a way that facilitates weapon management and switching to the proper weapon without any hassle. The directional pad is used to hotkey weapons, the B and Y buttons are used for next and previous weapons respectively and the white button cycles between your flashlight and your last weapon. At this point, if you can't find a weapon when you need one I hear Super Monkey Ball has been ported to the Xbox.

The one area where DOOM 3 seems to falter ,and this is most surprising considering id Software is also the developer of Quake 2, is in its competitive online multiplayer modes. Although you won't find any lag and each game mode drips of quality programming and design, there are simply too few modes to play. You'll find Deathmatch, Team Deathmatch, Last Man Standing and Tournament. Of the four, my favorite is Tournament for the simple reason that it isn't exactly what you'd expect: Two marines battle it out, head-to-head, while others watch. When the fight is over, the next spectator in line goes up against the winner. This was a brilliant mode in Dead or Alive: Ultimate and it is equally brilliant here. But all in all, the online modes feel a little shallow compared to some recent offerings like Halo 2, Unreal Championship 2 and even Timesplitters 3.

At the end of the day, while DOOM 3 may be a contradiction in every sense of the word, it does more things right than it does wrong. The game exudes quality and you can easily see that it was a labor of love. Fans of past DOOMs will appreciate the effort and enjoy every step of the journey. New gamers, not previously initiated to the DOOM Universe, can do a lot worse than picking up the Collector's Edition and discovering where FPS's started and seeing first hand what the blueprint to greatness really is. As it stands, DOOM 3 is a brilliant game that refuses to be modernized. DOOM 3 is about running and shooting and taking a breath-taking journey through Hell and back. While the flashlight gimmick runs a little old after a few hours, it doesn't lessen its effectiveness. Hours spent on DOOM 3 are some of the most nerve racking imaginable. The graphics will impress even hardcore PC junkies and the co-op mode is worth playing over and over again. While it may not be the second coming that many were hoping for, it is definitely a game with loads of integrity that knows very well where its roots are. And boy does it ever look nice.