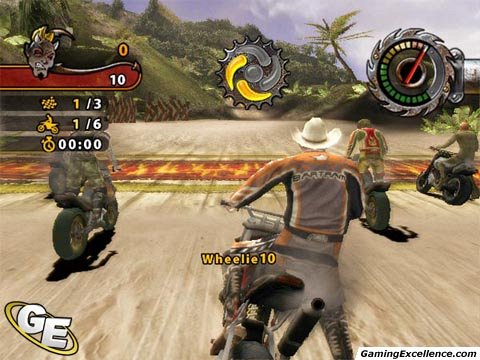 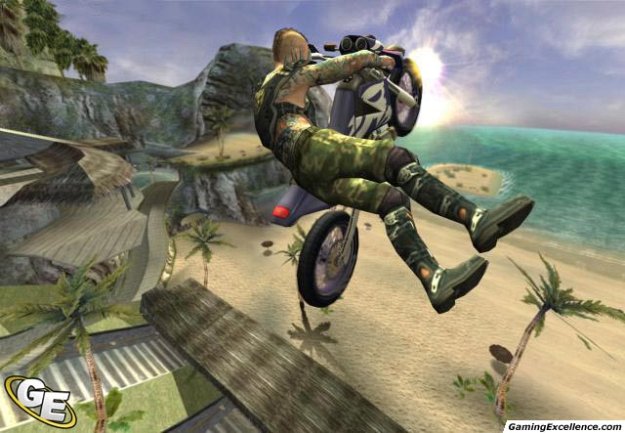 As a freestyle moto-x release, this game is as realistic as Starcraft: Ghost due date. Nevertheless, a game does not have to be realistic to be good or to be fun. Crusty Demons bases itself on gory and fantastic crashes making even surgeons cringe. The story mode features a line of five international levels, including New York, Cancun, Amsterdam, Rio, and Arizona. You start your tour in New York, selling your soul to the devil for eternal life. Of course, to get back your soul, you must travel around the world, doing the devils work in each location, and then beating Satan himself in a three lap race.

To begin, you pick one of fifteen riders including names like Ronnie Faisst, Kenny Bartram, Dan Pastor, Seth Enslow, or a personal favourite, the youngest one, "Twitch" Stenberg, whom can be seen humping the air in the character select screen. The difference in choice you ask? Looks. The initial level, the trailer park, gives you the basics of the game, including all the different air, ground, and bail tricks (yes, you can pull a cannonball while dropping ten stories to your... well, not death... to your pleasure?). New York starts the basis of the game, free roaming to different people, getting assorted tasks that are not very new to extreme sports games, such as smashing certain objects or people, racing from one point to the next, impressing people with high combos, and with immortality, seeing how many discs you can pop out of your spinal cord. This creates a very addictive piece to the game, increasing game play value immensely, as long as you do them, as they all aren't required to move along. What is required is placing first in the races, which occur after each location, and finally at the end of the game.

The objectives on the "devils checklist" usually consist of about 12 unique tasks: 6 re-used tasks (like smashing your teeth into targets placed un-healthily on brick walls), and about 4 secret tasks (personally, I just skipped these ones, as there is no clues as to what they are at all). Once you complete a select amount of the tasks listed, about 12 of 22, a final race will be presented. This race is three laps, with an array of shortcuts and bonus points to boost your nitro, and an intense amount of obstacles including walls that tend to jump out at you extremely quick. The shortcuts are close to useless, and there is a pinch of luck needed to win the race clean. For those that find the controls sensitive and frustrating, you should be taking advantage of the technology you have, mainly pressure sensitive buttons. You can also just use the damn brake button when you are supposed to, even though this type of game inhibits the want to just go all out all of the time.

Crusty Demons is great for multiplayer action, supporting up to four "demons" allowing you to wreak a great amount of havoc leaving your friends, with some nice scars, always asking for the best three out of five. The incredible injury detail just makes the embarrassment of crashing all the more fun. You can play tag, trick attack, theft, racing, crash grab (targets). It will be great for rentals, give it a run, but remember you'll have to unlock pretty much anything.

Unlockables in Crusty Demons is yet another addictive additive to this potent mix. You can unlock bikes, bio's, pictures, videos, tricks, and a single new character: the devil. The movies are great and there are plenty of them. They range from random stunts, to big tricks, which go hand in hand with big crashes and... pole dancing. The new bikes make combo's much easier, and get you higher and faster than ever before. The pictures are useless, as they are simply freeze-frames from the videos. The bio's are also useless, unless you're into reading bio's. By far the best part is unlocking various vehicles, ranging from mini speed bikes and ice cream trucks, to lawn mowers and go-carts. You can boot around on these things for days; sending pedestrians 20+ feet never gets boring.

The music and sounds in Crusty Demons are comparable to the THPS series, with a wide array of tracks and a sound effect for everything. The selection of character quotes is a little small, and do start to get annoyingly repetitive by the end of the game. They are also quite vulgar at times, making the Osbournes seem like angels. At points the voices do not seem to match the various characters you meet along your checklist. The sound effects are quite impressive and do make up for the losses, and the script will always bring a smirk at the least.

Crusty Demons is immensely detailed, proving to be a competitor in the best crashes ever. The levels are quite large, and include plenty of people, poles, boxes, signs, and much more for you to smash apart. The game does not have very good detail in the sense of flinging dirt, splashing into or through water, or even just plain illustrating and exaggerating the fact that you just reached match three while bailing down on an innocent piece of asphalt. The bikes are very well done, and each driver is too, but create-a-modes should be necessary for the sequel.

Crusty Demons is a surprise hit (with us at least), and shall always be brought out just in time for a party. The game should be a hit to anyone who loves Activision's line of extreme games, and should not have been subject to the ridicule it has received thus far. Crusty Demons is crusty, and that's the reason to love it.