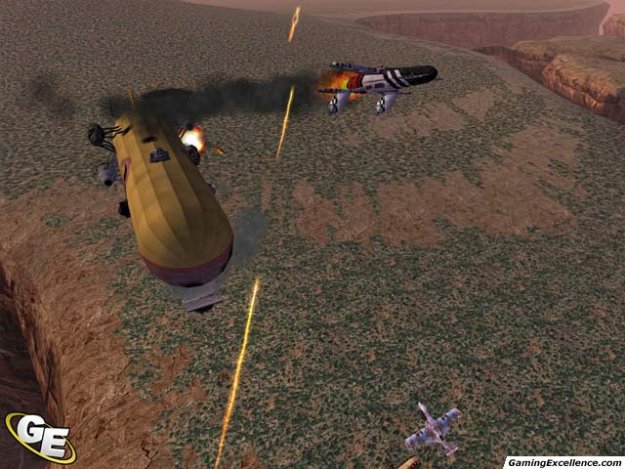 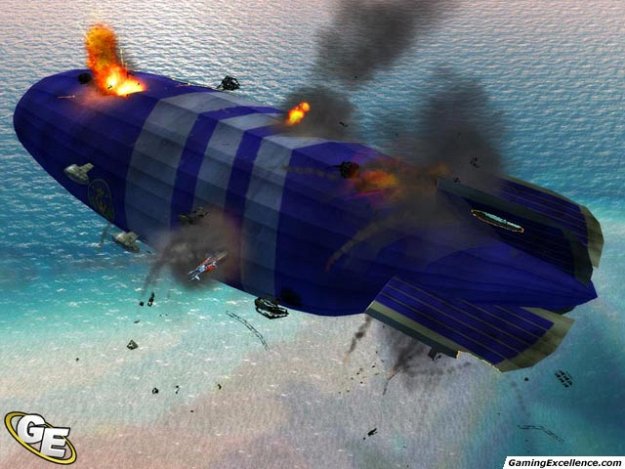 There really seems to be a lack of good flight titles for the Xbox, I'm not sure if it's too difficult to develop or too difficult to make fun. With an abundance of racing and shooters, it really is a shame we don't see more in the ways of flight. Crimson Skies: High Road to Revenge is this perfect balance of action and flight.

Crimson Skies takes you on a journey of revenge, to locate those responsible for committing murder on one of your close friends. But behind this murder is a story that will take you around the world in search of an answer, and a weapon of massive implications if it is completed and deployed.

Crimson Skies offers a variety of different options to play. The single player mode is a campaign, in which players take on the role of Nate. In addition, the title also offers multiplayer for up to four players using split-screen mode, or up to 16 players over Xbox Live. The multiplayer aspect of Crimson Skies is one of the best, the battles are intense, the gameplay is enjoyable, and it doesn't take forever to get up to speed. The title also offers a variety of downloadable content over Xbox Live, including new maps and planes.

Controls in Crimson Skies are simplistic in nature, but allow for a variety of intricate maneuvers and techniques. The title is based on the concept of speed, battles are quick paced and those who can think quickly will succeed. Players can easily execute complex air maneuvers such as complete 180's, aileron and barrel rolls. Controls are fairly straightforward, accelerate, brake, and turbo boost. If you attempt to overuse or abuse the aircraft (or complete maneuvers that would pretty much rip the aircraft apart) you can stall and end up in a tailspin, with only a small margin of recovery time. It's the simplicity of Crimson Skies that makes it so enjoyable, as even beginners can learn the basics in a matter of minutes.

The single player campaign is primarily spread over four environments. The first is a mysterious island named Sea Haven, a place of bandits and a small community of pilots. Later in the game, players will venture to a variety of different locations, from a western environment in the desert (Arixo), to the busy and bustling city of Chicago, and finally a lost tomb and mysterious underground cavern system. The multiplayer mode is also centered around these maps, allowing players to battle it out on a wide range of terrain.

Graphically, Crimson Skies is fairly strong. Environments are nicely detailed, and offer a lot of variety. Texturing and lighting are also fairly good. Aircraft models and battle scenes are very well developed, the trails of smoke and flames as planes riddled in bullet holes circle the skies, and the fragments and debris when planes explode in midair are really inspiring. Crimson Skies is a highly-detailed title graphically, and is more than adequate for this type of game.

Players can expect to fly a variety of different futuristic aircraft in Crimson Skies. You'll start out using an aircraft called the Devastator, a highly maneuverable and heavily armed warship. Packed with a heavy front-mounted gun and secondary missiles, the Devastator truly reflects its name. Over the course of your adventure, players will encounter different aircraft, such as lightly armed but speedy planes like the Desert Fox, or the highly armed, heavily defended shell of the Brigand (with both front and rear guns!). Of course, what would a flight title be without a helicopter to inflict deadly precision over long distances? It may be the weakest vehicle in the game, but the Gyro is the only aircraft in the game that can remain in a stationary position, and pick off targets over a distance. In most cases, you'll get an opportunity to select which plane you would like to use as they become available for each mission, allowing you to select the most appropriate aircraft for the type of mission. In addition to flying planes, players can also man a variety of different weaponry, from massive turrets on the Zeppelin, to rocket launchers causing a devastating effect to enemy aircraft. This variety of play and options are what make Crimson Skies really shine, and what can keep players coming back for more.

Unfortunately, the single player campaign in Crimson Skies is fairly short. If you pick up the controls quickly enough, you can expect to beat it with a good bunch of the side options in less than ten hours. The campaign offers a wide variety of mission types, from attack and defend, to missions that require raiding vehicles and destroying enemy outposts. Even on the most difficult modes, the single player mode isn't overly challenging, and once you step onto Xbox Live it's hard to go back to single player. Multiplayer over Xbox Live supports a variety of different modes, including free-for-all, team-deathmatch, and capture the flag among others.

Crimson Skies was one of the debut titles for the Xbox, and remains a true gem. Although it's a few years old, it still offers a very solid single player campaign, incredibly addictive multiplayer over Xbox Live, and one of the most innovative and well-designed flight engines for the Xbox to date.