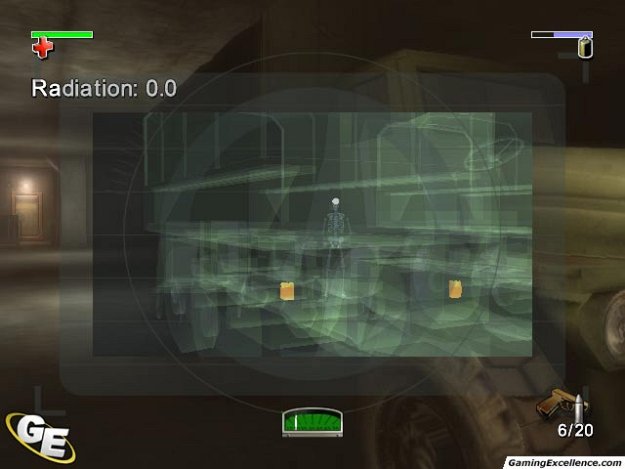 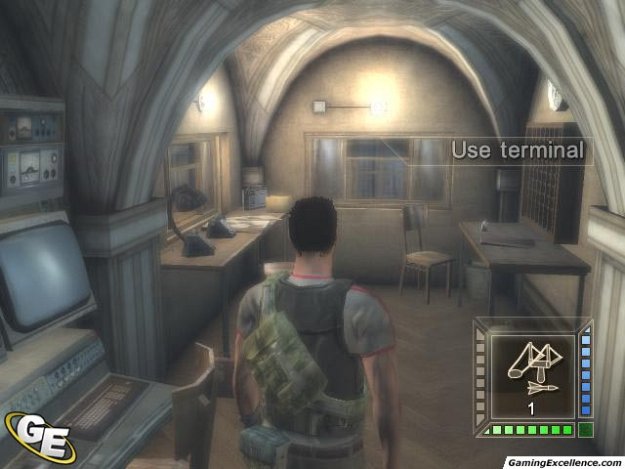 When my editor called to tell me I'd be reviewing Cold War from DreamCatcher Interactive, for whatever reason, I expected an adventure game the likes of Syberia. When I had the game in my hands and saw the screenshots on the back, I realized that this was no adventure game in the traditional sense. When seeing the main character crouched and sneaking upon an unwitting guard or another character with the green-lit goggles I had visions of Splinter Cell. And I was again looking forward to Cold War. Besides, there's room for two great stealth franchises on the Xbox right?

The game takes place in 1986 during the Cold War as the U.S. and the Soviet Union near perestroika. Peace and cooperation are not on everyone's agenda however and a faction of the USSR wants to frame an American in a plot to assassinate the Soviet President. Conveniently enough, our hero, Matthew Carter an American journalist, is inside Moscow following a lead that will make him a superstar journalist and instead becomes embroiled in the Soviet plot and must fight to stay alive and clear his name.

Where Cold War's plot succeeds at being original (and slightly eye-rolling-bad) and many of its gameplay trappings are also unique (gadgets, cutscenes, etc) its characters falls hopelessly in a hodgepodge of people we already know. Physically and emotionally, Matt Carter is very much the spitting image of Half-Life's Gordon Freeman. He is the geeky every-man caught up in a plot much bigger than himself and easily represents every common person in the world. Matt also has the short hair, thick glasses and goatee which immediately reminds any gamer of Mr. Freeman or Matthew Good. So what's an every-man to do when things go from bad to worse quickly? Call the police? Contact the American Embassy? Nope! Sam Fisher it up! And while I do believe the hardened Fisher as a man capable of stealthily and coldly infiltrating any area and dispatching of enemies, Carter newer gives me that cushy sense of reassurance. Lastly, Mr. Carter also has a little bit of MacGyver in him with his uncanny ability to make the most unbelievable objects with bits of crap. While these may never really make sense (unless Carter has a Masters in atomically disassembling objects and using nuclear reactions to reassemble them) it is one of the highlights of the game.

The game begins with a voiceover and comic book cutscene. No, not a cartoon, a comic. A static image that the camera pans around while a discussion occurs. While this is quite original, it just never seems to fit into this game or seems to convey the fact that making more impressive cutscenes wasn't in the budget or in the schedule. The voiceovers, for their part, are uneven and suffer from certain characters with grating voices and the inability to end sentences on anything but high notes. Like everything was a question? Regardless, you will soon gain control of "Sam Freeman" and from there you'll have a host of other inadequacies to ponder.

"Gordon Fisher" controls very much like Ubisoft's master operative. He can walk, crouch, run and interact with objects via a context-specific menu that will allow him to open doors and such. "Sam Carter" can also equip a weapon in which case the camera moves from its third person perspective to an over-the-shoulder view. Did you expect a stealth game to give you more moves? Hugging walls, climbing pipes, hand-to-hand fighting (besides blind-siding unsuspecting opponents from behind)? Matt is just a journalist with super-gadget knowledge, so he sticks to the basics. While he "can" sneak around, it's easier to just shoot everyone you come into contact with and while you "can" pick up bodies and hide them, it's a useless feature of the game that never really plays out like in Splinter Cell. You also have a Visibility Meter and are encouraged to remain quiet (silenced weapons, etc), but neither of these two really affect gameplay since the A.I. suffers from Neanderthal-ism on all fronts. And no, that's not a good thing.

The true highlight of Cold War comes from the various gadgets that "Matt MacGuyver" can build. While it would have been nice to be able to assemble any device we could think of (and had parts for), Cold War makes you hunt for files and blueprints to gain knowledge of how to assemble everything from a tranquilizer gun to explosives. You also pick up Tech Points from reading technical files and using these point you enable the knowledge of item-building. The system isn't as fleshed out as it could've been, but assembling gadgets is still the best part of Cold War. One of the devices that you get early on (you don't build this one) that will be incredibly useful (and exceedingly cool looking) is the x-ray camera. Using this device you can see through walls and easily identify where your enemies are. This x-ray camera is well implemented and fun to use but in hindsight, makes the game a little easier too.

Graphically, the game is a mixed bag. Certain items and areas are well textured and full of things to see, others are devoid of objects and seem half-finished. The characters fall into those two same categories as well and while on the subject of characters, it's odd that Matt can walk s-l-o-w-l-y or run fast but seems unable to just walk like a regular human being. The highlight of the game, graphically, comes from the x-ray camera which is truly fun to use in each and every area you are in. The fire effects are also well done. When I first began to play this game I was reminded, artistically speaking, of one of the first PlayStation games I ever played; Fade to Black. I don't know if this is do to the color palette used or the lack of certain details in various areas, but fans of FTB should find something familiar in Cold War to look at.

In the audio department, Cold War suffers from grating voices, annoying and preposterous speeches and characters that are hard to care for. This may all be due to the fact that when characters are speaking, there is visually nothing to focus on, so all your attention is firmly entrenched on their voices. After a few eye-rolls, however, you just want them to get on with it already! Musically, the soundtrack fits the scenes of the game, but is mostly forgettable as background noise.

Is Cold War a bad game? No. It just tries too hard to be Splinter Cell (with all SC's meters, gadgets, sprawling story-line, authenticity, etc) and fails to be original on its own merits. When Cold War is trying to be something it's not; the game is terrible. When Cold War tries new things (gadget building, x-ray camera, etc) it's hard to deny how fun it can be. If you're a fan of stealth action and want to try something new, Cold War is at the very least worth a rental. Just know what to expect from it.