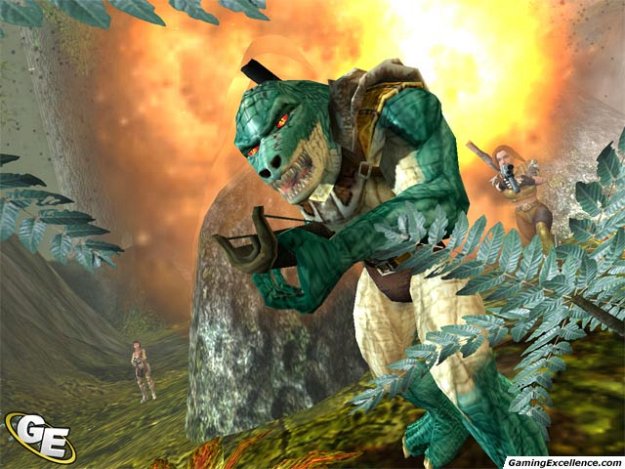 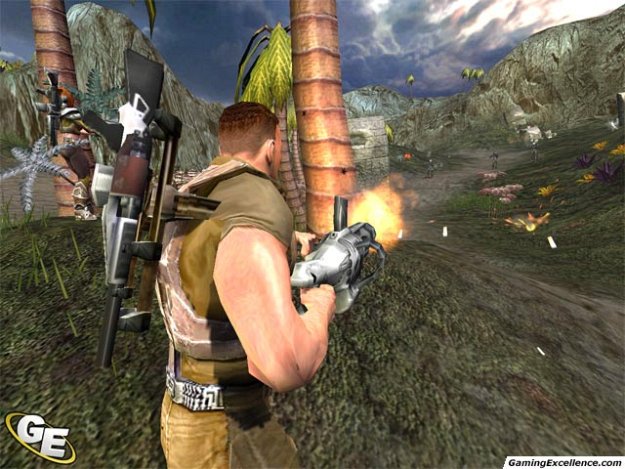 You know why you're here soldier, so listen up. You're the best the Confederation has and as a member of the Confederation, you have taken an oath to protect the galaxy from those who are bent on causing it harm. Grab your gun and prepare for the battle of your life. Don't worry, with cloning, we will keep your butt on the battlefield as long as we can afford to. Welcome to the 23rd Special Forces Unit, code name Brute Force.

Brute Force was released shortly after the critically acclaimed Halo. Digital Anvil, in hopes of capturing some the Bungie's success, released this science fiction war game. While it didn't receive as much attention as Halo, it wasn't because of the game itself. In fact, it deserved much more credit than it was given. Many people try to compare the two games, and once again, this game was unfairly treated. Brute Force, unlike Halo, is a team based third person shooter. It doesn't have the cult following that Bungie's title does, but it did have a strong fan base of players who enjoyed the game's multiplayer friendly interface. It was one of the first shooting games that allowed players to join in the action by simply plugging in a controller and pressing start. Because of this, Brute Force actually outperforms Halo in cooperative play. A strong statement, but it is one that should be made, especially to those who have constantly criticized Digital Anvil for this title. Also, keep in mind that Brute Force actually beat out Halo in first week sales, setting the record for early Xbox releases. This only reinforces the fact that Brute Force was a solid and well developed title for the Xbox. Another thing this title did was offer players a glimpse of what Microsoft's system was capable of with solid graphics and sound. This is something many early Xbox titles couldn't accomplish, and the reason why Brute Force was so popular when it was released.

Time has passed since its release and new games have pushed the capabilities of the Xbox to new heights. When many older titles were released at bargain prices, Microsoft decided to do the same thing with two of their early successes. With the release of the Halo/ Brute Force double pack last year, many asked was this game worth the money? Sure it was a hit when it was released, but does Brute Force withstand the test of time? These questions may be hard to answer, especially since there have not been many titles like Brute Force for the Xbox. It shouldn't be difficult however to say that Brute Force was one of the best Xbox titles of its time. It was also the first title to have downloadable content, which helped expand the gameplay experience for many. For this alone, Microsoft Studios should be congratulated for giving players such a solid title, one which initially sparked my interest in the Xbox itself.

Presentation wise, Brute Force is well done. Picking up the box and reading the game's tag line, "Dangerous Alone Deadly Together", helps reel in the curious and eager shoppers. The rest of the box, including screen shots and colour schemes, are professionally developed. The instruction manual is very easy to read, filled with colourful character models and screen shots. Once this game is inserted and the Xbox is turned on, players are shown a well crafted opening movie. As a casual gamer, I do enjoy waiting for the game's opening cinema before pressing start. All in all, presentation for Brute Force gets high marks.

Visuals is one of Brute Force's many strong aspects. While these might not be impressive by today's standards, they blew away early Xbox owners. The character models are very well done. Tex and his gang are very detailed, very life like. For example, characters lips move in synch with the voice acting. Most games don't have this, even the new Phantagram's Kingdom Under Fire: The Crusaders, lacks lip synchronization with English spoken dialogue. For this alone, Microsoft Studios deserves an applause. Another impressive aspect is the textures. While they are considered out of date by many, they still seem to set the benchmark for many Xbox titles. Walking through jungle terrain or even a lava scorched landscape, and players will find that the worlds have a life of their own. With that said, there are also a few weakness that must be mentioned. Following titles like Bungie's Halo 2, gamers expect a lot more out of the environments they interact with. By these standards, Brute Force's environments seem to lack any real sense of ambience, they fail to draw the player in. Also, the character models, by today's standards, seem almost cartoonish in nature. While very detailed and very well done, when comparing them to character models like those in Ubisoft's Price of Persia series, or even their Splinter Cell trilogy, Brute Force's cast seems more like Mickey Mouse then Master Chief. Even with these criticisms, Brute Force remains very pleasing the eyes. That is saying a lot, especially by today's standards.

Audio is another aspect in which Digital Anvil should be applauded for. The sound effects, for their time, were very well done, but do they still hold up against today's standards? Brute Force has a wide array of sound effects. Some are very simplistic stock sounds, like footsteps, or grenades exploding, but some are unique and very interesting. For example, the sounds of Brutus and the Feral Warriors were very well done. The lizard men's growls and grunts remind players of some of the audio work done for movies like Jurassic Park. Even a few years after its release, Brute Force is still up to par with most new games. The only real issues with sound effects would be the fact that there is not a wide variety of them. For example, most weapon fire sounds the same, which really takes away from the impressive audio of this title. This is very noticeable, especially with the wide array of sound effects available in newer titles.

Brute Force also offers a wide array of voice acting. This is where the game really shines. Even for an older title, this game gives players some of the best voice acting on the Xbox. From the cinematics to the in-game monologue, Digital Anvil really did an amazing job especially where a lot of newer titles have stumbled. Along with the lip synchronization, strong voice acting really adds life to the characters in Brute Force. Players will enjoy the witty remarks of Tex and the squad throughout this game. While this adds to the cartoonish nature of the game, it is rather refreshing to have a game with a fair bit of humour, especially since the Xbox is well known for its mature content. All in all, when taking into account the modest array of sound effects and the superb voice acting, Brute Force still remains strong in the audio department even by today's standards.

Gameplay is an aspect of which there has been many mixed feelings. To start off, while Brute Force is a third person shooter, controls mirror those of Halo and other first person shooters. This means, unlike Namco's Kill Switch, player's won't have the ability to take cover or dodge fire. While experienced players will be disappointed, causal gamers will enjoy the fact that this title is rather simple to play. Digital Anvil does give each character different abilities and different special powers. This helps keep the game from being repetitive and dull. Depending on the situation, players will use different characters. For example, when stealth is needed, Hawk's speed and her Stealth ability come in handy. In most situations, players will find themselves using either Brutus or Tex. These two characters carry the heaviest weapons, and are perfect for going into the fray. Tex can carry two heavy weapons and his Berserker ability allows him to use at the same time. While Brutus can only carry one heavy weapon and one mid weight weapon, his Spirit of Vengar ability replenishes his health. This allows Brutus to take much more damage then any other character on the team. The Spirit of Vengar ability also allows him to see body heat, which is very useful for finding hidden enemies, like snipers. The last member on the team is Flint, the team's sniper. For players who like staying at a distance and picking off opponents from afar, Flint is perfect for the job. With her Advanced Targeting ability, which automatically targets enemies at any distance, she is a threat at any distance. Other abilities for these characters include Tex's demolition skills and Hawk's computer skills.

Aside from the game's mechanics, Brute Force provides players very unique single player and multiplayer experiences. In single player mode. players will take control of one character and command the rest. In comparison to other squad based shooters, Brute Force is rather complex. This is both a strength and a weakness. Unlike LucasArts' Republic Commando, Brute Force's system is not simply point and click. Using the D-pad in combination with controller's six face buttons, players can give out orders or even switch team leaders when the situation demands it. On lowers levels of difficulty, this isn't as important, which might be best for players who have a hard time with this system. What is very enjoyable about this game is the quick co-op feature. From single player, a friend can quick join the fun by connecting a controller and pressing start. With four player co-op, the game plays much differently. Multiplayer doesn't require players to switch between characters as often. With four players, when a character is killed, they are instantly brought back. This speeds up gameplay and adds hours of additional enjoyment. This game also offers multiplayer deathmatch. Much like other shooters, Brute Force's deathmatch pits players against players, or even teams against teams. With system link, eight players can play head to head. With eight teams in combat, this can be very intense. All in all, multiplayer and single player offer very different gameplay experiences. Because of its simple gameplay mechanics, a strong single player and multiplayer experience, Brute Force still remains one of the more enjoyable games on the Xbox.

Replayabilty is something Brute Force has definitely accomplished. The single player campaign takes fifteen to twenty hours to complete, and with different levels of difficulty, players will spend hours challenging themselves and their abilities. Multiplayer also adds hours to replayability. I cannot count how many hours I've spent in front of the television's warming glow because of this title. While many will find co-op to be the reason to play this game with friend, multiplayer deathmatch also very enjoyable. Brute Force also has downloadable content. For an older title, it may surprise many that it was one of the first games with this feature. With additional single player and multiplayer maps, players will have several more hours of added gameplay. In fact, because it has been out for so long, the amount of maps and addition add-ons more than double the game's life expectancy. All in all, when all this is taken into account, it is easy to see that Brute Force still manages to offer players hours upon hours of replayability.

While time has passed, the quality of this title hasn't diminished by much, if at all. Brute Force still remains up to par with most titles today. While visuals, audio, and gameplay have improved over the years, titles like this one are still considered the benchmark by many. For those who have never played Brute Force or Halo, pick up the new double pack, it should be easy to see that this is a game that no Xbox owner should be without.