The Legend of Zelda: The Wind Waker HD (Wii-U) 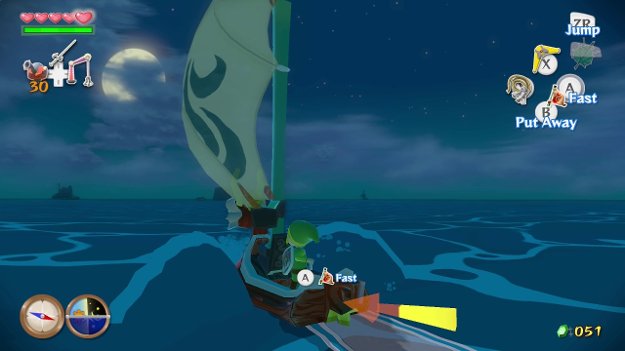 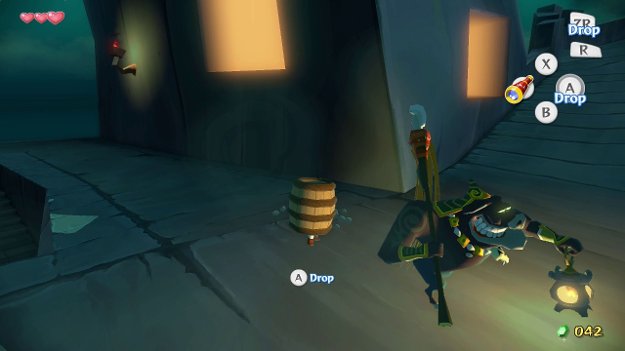 When the original Wind Waker released I was incredibly excited to try a Zelda game in a brand new setting. When I got it as a Christmas present I ended up playing it that same day and didn’t do much else for the next few days until a realization struck me. I hated the game. Not just disliked it but I actively hated it. It’s not that it was a bad game, no it had solid game design, but it was all of the damnable busy work. Sailing across the sea takes forever, finding the various treasures takes forever, deciphering the sea charts takes a stupid amount of money which means money scrounging and then before the final fight you get a scavenger hunt that brings the game to a crawl.

How could a game with such promise end up feeling like such a mess? Well supposedly there was a rush to release the game via deadline and busywork seems to have filled in for the dungeons that were removed. So a great game ended up being severely weakened by a deadline compromised vision of the game. Now what happens when all of that busy work is tweaked to make it less boring? You get one of the best games in a series known for fantastic games.

For the horribly deprived The Wind Waker tells the tale of a young boy named Link, raised on a remote island amidst the never-ending ocean that is the game world. After a giant bird kidnaps his sister Aryll, Link sets off on a quest that sees him standing up against the ancient evil warlock Ganondorf and discovering the fate of the land of Hyrule. All of this will involve sailing across the seas aboard a sentient ship known as the King of Red Lions, gathering numerous sacred treasures and rescuing your sister! 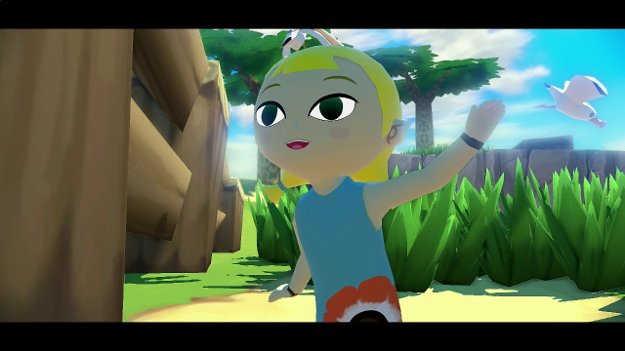 Not only was the original game absolutely gorgeous in its own right but it excelled in one area a Zelda game always should - great combat. You're not just limited to one generic attack and the ability to block enemies. You've got three different attack types, each suitable for combat in particular situations, the ability to roll around to evade enemy attacks and, most importantly, the ability to perform a badass counter attack. Press the dodge button at the right time, as indicated by an on-screen prompt, and watch as Link leaps through the air, or rolls behind the enemy, and blasts them with an overpowered slash to their vulnerable sides. If that's not enough you've got the usual sub-weapons (boomerange, hook, etc.) and the ability to disarm enemies so he can use their own weapons against them. Or pick up the sword from a defeated enemy and use it to clear out his friends. Really the combat system has always been one of the strong points of The Wind Waker so the port didn't have to change much of anything to have one of the best combat systems in the series.

The original game tried to be somewhat realistic by making you a slave to the winds. With the winds working against you movement would be slowed to a crawl and only by constantly using your magic baton, the titular Wind Waker, to adjust wind directions could you make any progress. Even then the boat sailed rather lazily and numerous enemies got their kicks by knocking you out of the boat when they attacked you which made the whole thing take even longer.

All of that has been fixed. All of it! When the wind is in your favor you move way faster than before and even when it’s not in your favor you still move at a respectable speed. You’ll only be forced to change the wind when it’s going directly against you. This is a very nice change. It’s even possible to remove the necessity for dealing with the wind at all by purchasing the Swift Sail upgrade from the auction house, keeping your sail full of wind regardless of what direction it’s actually facing and letting you speed across the wind even faster than before.

Even better is that hits by most attacks won’t knock you out of the boat, instead just dealing some damage, which eliminates one of the biggest problems with the original. No longer do those obnoxious Gyorg’s need to be jumped overly carefully, now dodging them just by shifting the boat which makes getting anywhere on this giant map so much easier. It can still be a bit tedious traveling a long ways along the water but it’s nowhere near as bad as it was before. 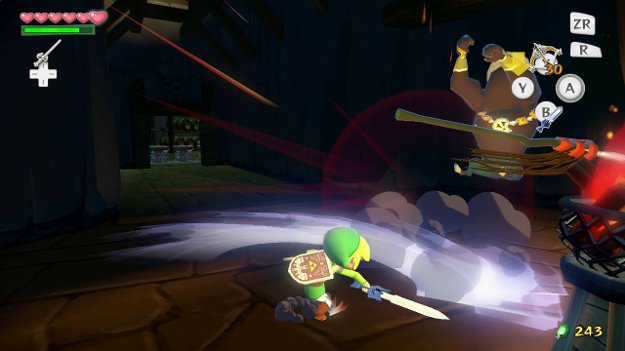 Since the boat rides are now fairly stress free (barring when you’re going somewhere where attacks are inevitable) you can actually admire the gorgeous scenery. The original Wind Waker was already a damn pretty game and one of the few cel-shaded games I’ve actually felt the art style added to the experience. But it’s gone from looking like a damn pretty cartoon to almost looking like a moving diorama. It almost looks like you could reach into the television, take one of the characters in hand and play with it like a doll. On a side note I now want some Legend of Zelda figures.

Spending money aside, it’s actually really amazing to watch all of this in action. Seeing one of the bosses prepare its elaborate attack, laughing at the surprise on a Moblin’s when you steal his necklace with your grappling hook or just enjoying the scenery is always a joy. There’s almost no situation where I wasn’t finding myself able to sit back and enjoy the scenery.

Another thing I immediately hated about the original Wind Waker was the sea charts. Most of them pointed out money or upgrades and were marginally useful. But near the end of the game you must gather the pieces of a plot relevant item to reunite it and the game just went to pot. 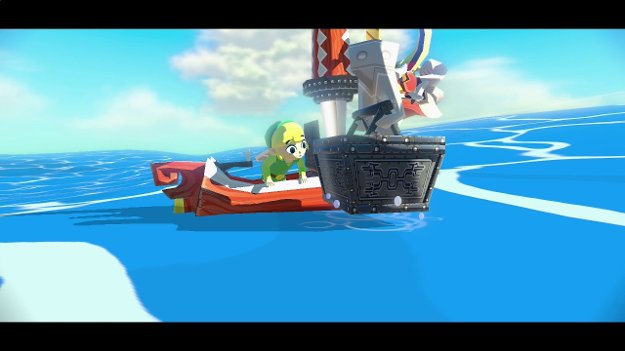 You had to purchase a chart from that disgusting monster Tingle for 201 rupees, one more than you can carry. So first you have to get a wallet upgrade, collect the money and then pay him for a chart that tells you where to find the other charts that’ll tell you where the parts you need are located. Then you go, get the charts and bring them back to this beast so he can charge you a ridiculous fee that totals up to several thousand rupees. All of this necessitates trawling the world for the treasure chests that have rupees in them which takes up even more time. Then you pay him, get the charts deciphered and get to go out into the sea again to deal with the obnoxious enemies and sea winds while trying to find the pieces. It just adds up to needless busy work that takes a ridiculous amount of time.

Well most of that has been cut right the heck out. The first five of eight pieces has had its sea chart replaced with the actual piece itself, meaning that you only need to deal with three sea charts to hunt down those last pieces. Also you start with the ability to carry much more money (200 in the original, 500 now) and since this game throws money at you like mad but gives you little to spend it on you’ll be able to easily amass the money to pay for those three charts to be deciphered, especially if you get the wallet upgrade, to bring your capacity up to 1,000.

To add to the awesome that is this game, they’ve even managed to tidy up the Pictobox quest. Normally you’d get the box, hunt down a firefly in one particular place, bring it back and get the upgraded box. Then you’d take pictures of people, bring them back to the guy on one island, see if he approved of the pictures and then bring them across the world to a second place to get them approved. Gone! Now you get the color box after finishing a few easy quests and the pictures themselves tell you if they qualify. Plus the box holds up to 12 pictures instead of three, making this whole process way easier. Oh and if you miss a picture you can always try to see if someone on the Miiverse has posted one and then use that. How much easier could it be?!

So now we have almost all of the small things that hampered the game seriously slimmed down or removed altogether, looks incredible compared to contemporary games much less how it looked back in the day and it actually lives up to its HD namesake on the package. It’s not much of a stretch to say that Wind Waker HD is the single best HD remake on the market right now and it’s probably one of the only ones that deserves to market itself as anything other than a cheap port. Even if the developers managed to get this done in a rather short time (supposedly six months) this has more effort put into it than is put into most games on the market nowadays.