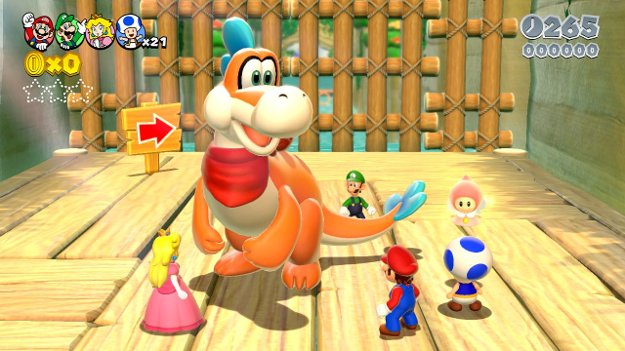 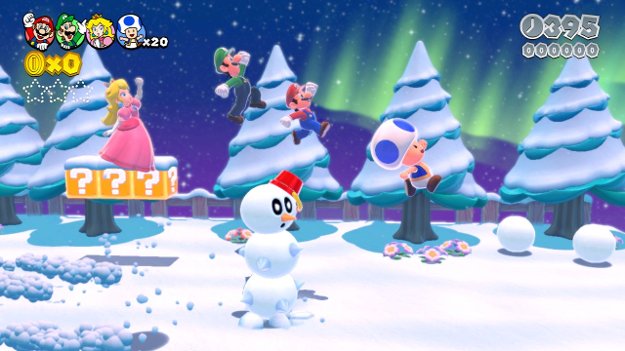 Four friends gathered around a television, yelling at each other, swearing, and laughing all at once. It's something that hasn't happened a lot in some time for me, what with most multiplayer being online nowadays. But the Mario series has always been about the local gameplay, and with Super Mario 3D World on the Wii U, it is so easy to why this is the case: bouncing on people's heads, tossing them into pits, and locking them out of a first-place crown in each level is made that much richer when you can glance over to see their reaction (often a rude gesture), instead of simply hearing it over a mic.

Super Mario 3D Land came out on the 3DS some time ago, and it was a great reintroduction to what makes a great Mario game: imaginative levels, new powerups, and a great use of the 3D element of the console that few other games can reproduce. Super Mario 3D World, in addition to other elements, offers what 3D Land did not: multiplayer. Here, up to four players can take control of Mario, Luigi, Princess Peach, and Toad in order to complete the trials of some sort of fairy kingdom, where Bowser has decided to kidnap a bunch of fairy princesses. It's up to these four to save them! 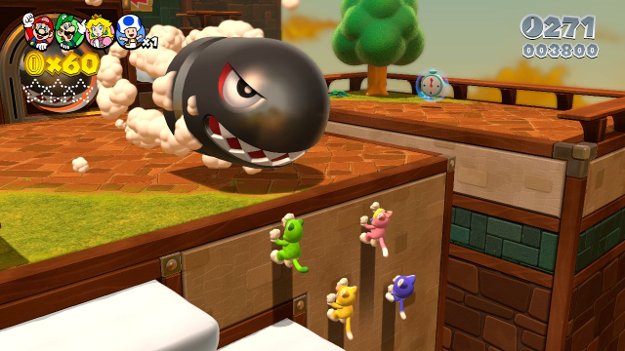 Mario gameplay is pretty standard - you run, you jump, you step on bad guys and watch them poof out of existence. Like 3D Land, the purpose of each level is to reach the flag at the end of each stage. This unlocks further stages, with a big ol' boss at the end. But new to 3D World is the cat bell powerup, one of the best powerups I've seen in a Mario game in some time. With it, you're put in a cat suit that gives you new abilities, like being able to cling to and run up walls, perform dive attacks, and pounce at enemies. Also, with it equipped you meow at the end of every level, which is basically the best thing.

What 3D World excels at is level design, a wide variety of levels that constantly keep things fresh. Each level has its own set of mechanics to learn, some that are unique to the entire game, and except for a few unremarkable ones, each is fun to play through. Of course, they all have elements similar between them, but there's always a different feeling as you play through, and as you play through each of the worlds in the game, new elements show up that make you learn new strategies again. The difficulty never gets too intense, and the biggest punishment for losing all your lives is returning to the beginning of the level with five lives (for each player). So even when things get crazy, you never feel like you're being punished.

It's actually surprising how much I found myself dying in Mario 3D World - now, this may have had something to do with the fact that I was playing with three other friends and we were...well, we weren't exactly being careful. "Hey look, we're already at 29 lives!" someone said. We got a game over a few levels later. Throwing each other into pits and racing through precarious paths will have that effect. 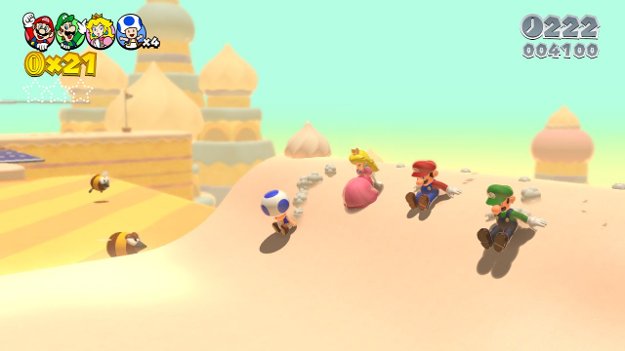 There's actually a few elements to the multiplayer that make it really fun to play beyond just having three other bodies to knock around - my favourite is the crown that appears on the player's head who scores the highest in a level. See, if they can get this crown to the end, they earn five thousand points, which helps them get to first place again. However, if someone were to knock it off and steal it...well, then they could be king. A false king, but a king worth five thousand points. So maybe someone might take a spill...

It's fun, and filled with just the right amount of back-stabbing that I'd expect from a game like this. I mean, you could play nice and beat the levels without being mean, but where's the fun in that?

One big complaint with the game is how the level design and camera work seem to be in conflict with the multiplayer - with four people it's common that different people will want to go in different directions. Often, for example, there'll be a secret on a high plateau that one or two people may try to reach while others move on, and due to the close camera, this will generally mean that someone will be pushed out of frame and 'bubbled', which simply returns them to the rest of the group. This can even occur if someone is simply a little faster than the rest, and can get a little annoying, especially when other games (such as the LEGO series by Traveller's Tales) have done multiplayer platforming with multiple cameras without too much trouble. 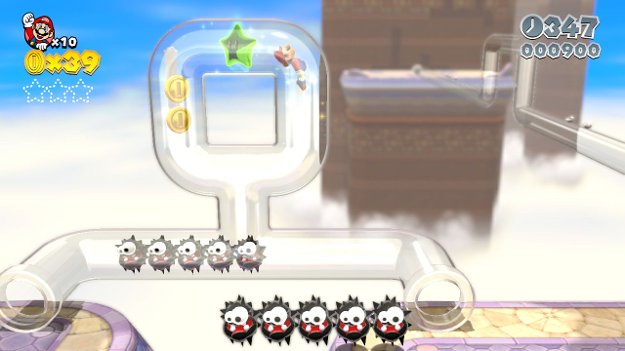 Super Mario 3D World is, simply, a whole lot of fun to play. The worlds are vibrant, the gameplay interesting, and the multiplayer a blast. This is by far one of the best Mario games to date, and being able to play with three friends is just icing on the cake here. If you like Mario 3D Land, or just platformers in general, you'd be remiss to not pick this one up, fire it up, don a catsuit (in game, please) and toss your closest friends into a pit.