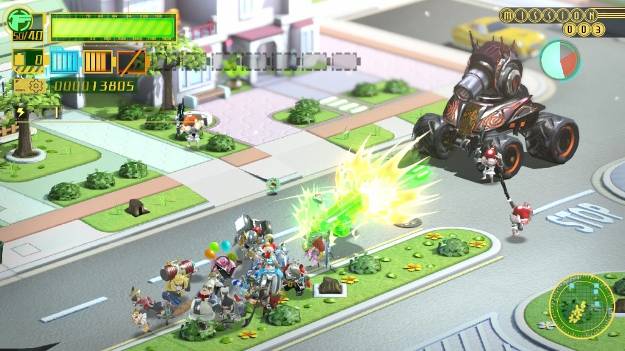 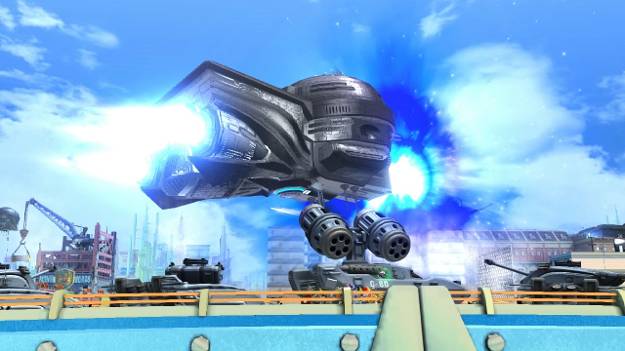 Of all the new titles announced by Nintendo, I was surprised that one in particular didn't seem to get as much of a spotlight as I felt it should. Project P-100, a working title, is a game exclusive for the Wii-U that merges bizarre, zany, and entertaining in a way that will pique many people's curiosities.

Anyone who's played something by Platinum Games, such as Mad World (featuring extreme, over-the-top violence meant to be seen in a comical light while animated in a style akin to Frank Miller's Sin City) and Viewtiful Joe (a movie's villain kidnaps Joe's girlfriend and he thus becomes a superhero to save her, complete with his own catchphrase, "Henshin-a-go-go, baby!"), will know exactly what to expect in Project P-100; silly humour bundled with fun, addictive gameplay and its own quirky charm.

This mass action hero strategy game has you play as one main action hero who's doing what he can to fight back against an alien invasion. As you make your way through vibrant neighbourhoods (which are all the more vibrant with the Wii-Us HD capabilities), you recruit fellow citizens, both regular and super hero, to be a part of your anti-alien posse as you try to save the world. Pikmin fans will recognize the idea and gameplay of one hero "leading the people."

Citizens in peril will have a "HELP" hovering above them and, once you vanquish whatever's causing them distress, you can then recruit them by using the Wii-Us analog stick to draw a circle around them. Other times they'll simply be stunned, usually after being attacked, in which case you do the same thing to shake them back to their senses as they join your team. The number of followers reflects your strength so the more people you recruit, the stronger you become.

During combat you can morph your followers into weapons through a "unite morph attack." By using either the analog stick or the touchscreen on the controller, you draw out specific shapes to cause your crew to become one of several brightly-coloured giant weapons. In the case of the demo, drawing an L-shape resulted with a green gun, a straight line a blue sword , and a circle for a red hand. In addition to using these to fight, they can also be used to interact with the environment and solve many in-game puzzles; the sword can be used to cross a large gap from one platform to another, and the hand helps turn knobs and cogs to get you on your way.

If you get hit during a weapon morph, however, some of your followers dislodge and become stunned until you recruit them once again. To avoid this and defend everyone you can morph into a giant jelly mould to literally bounce off attacks. Unlike the weapons which last as long as you wish (unless you're hit), the jelly mould defence tactic can only be held for a short amount of time so you must time it well. Conveniently, if you were using a weapon and then quickly switched to defence, the jelly will have the same colour as the weapon you were using. Aside from looks, the different-coloured jellies otherwise have the same capabilities.

To add to the silliness, though they weren't in the demo I was told there will be bad guys with ridiculous attributes such as a toilet or a bathtub on their heads as well.

Other details were kept quiet such as whether P-100 will have a multi-player option and why the aliens are invading the Earth in the first place.

This game has a great sense of humour and I wished the demo gameplay lasted longer than it did. There's enough action, puzzle-solving, and random bizarre situations to keep you entertained as you lead your fellow citizens to victory. Project P-100 is currently "polished but not finished" and as such has no confirmed release window at this time.