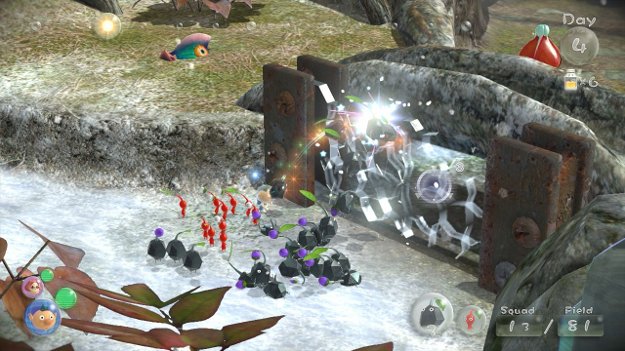 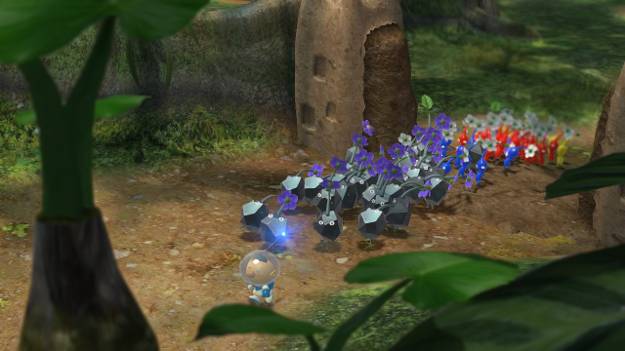 Pikmin, a series about sending brightly-colored creatures to their deaths in a harsh and unforgiving world, is back on the Wii-U, and its charm is as unmissable here as its previous iterations. This new game adds a few new features to the mix, undoubtedly growing on the shoulders of its predecessors, and, while it does have its flaws, the end result is something that will undeniably hit a nice point for those that have played the games before.

One large departure of the game starts with the protagonists - no longer controlling stalwart Captain Olimar, you're now in charge of three crewmates: Alph the engineer, Brittany the botanist, and Charlie the over-confident captain. These three have been tasked to find food for their planet's rapidly dwindling supply and end up crash-landing on the Pikmin's home planet. But the new characters don't just affect the story, they affect the gameplay as well. 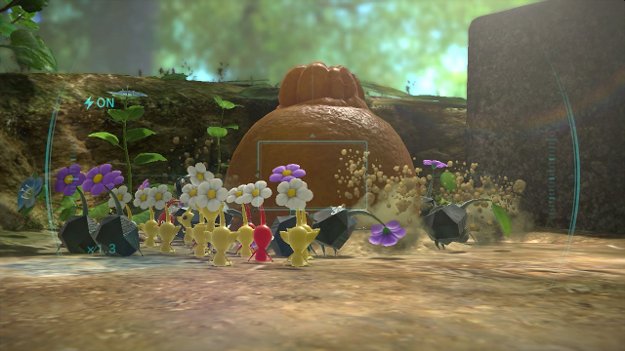 Each of the characters are controlled separately and, while what they can do autonomously is limited, it's crucial to getting through the game. You can point to a location on the map for a character to move to and they'll let you know when they get there, allowing you to divert your attention elsewhere. Being able to multitask with three different groups of Pikmin adds a layer of strategy to the game that simply wasn't there before - making each level a challenge to optimally direct your troops as you collect everything you can before the sun sets. In addition, you can throw your teammates across pits and over ridges, allowing access to new areas that require multiple people to traverse.

The time limit returns in Pikmin 3, though this time it's a little different. While the first Pikmin game gave you a strict 30-day limit to repair your ship, and Pikmin 2 abolishes a limit entirely, this iteration finds a middle-ground by giving you a time limit via food supplies that can grow as you find more and more fruit throughout the game. Some of the larger fruit may give you multiple days' worth of juice supplies to consume while others may just give half a bottle - and though things start a little tight at first, it's easy to eventually find yourself with quite the buffer to explore the planet as you search for a way to escape it.

The new world still charms you while offering a number of environments that grow bigger and bigger the more you explore them, allowing ample experience to find new enemies to defeat, fruit to devour, and artifacts to analyze. The game offers a hiccup in the way you control it though - using either the gamepad or Wiimote and nunchuk, things tend to be a little clumsy.

The gamepad offers you the map to glance at whenever you need it, and lets you swivel the camera around with the second thumbstick, making looking around a breeze. However, trying to lock on to certain enemies is a giant pain in the ass, especially flying ones, and gathering scattered pikmin can be a crapshoot at times. Conversely, the Wiimote lets you command and target your colorful minions with ease, but feels clunkier to move around and lacks the second screen for an interface. Both have their own pros and cons, but can be just a little frustrating to control, especially during things like boss fights. 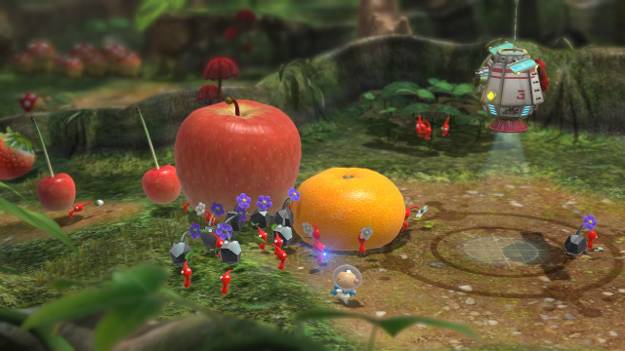 All the pikmin are as adorable as ever and you'll see every familiar face here - the blue, yellow, and red pikmin are all back in the story, with new varieties to keep the game fresh: pink pikmin can fly, allowing them to avoid certain problems and pitfalls, while the new rock pikmin are heavy, squash-proof, and can shatter barriers in your way. The purple and white pikmin are available too, though they're only accessible in multiplayer gameplay.

Multiplayer modes come in two flavours, depending what kind of experience you want: the first, mission mode, lets you play with a friend (or solo, if you want) to complete objectives in a very tight amount of time. Defeating all the enemies, gathering treasures, or taking on any boss you've beaten in the story means working together and communicating to fine-tune your strategy, and ate up a lot of my and my friend's time. There's also the bingo mode, which has you trying to collect certain enemies or objects to complete a line on your bingo card, opening up avenues such as being able to screw your opponent over by grabbing the last object they need to get a full line. Each mode is fun in its own way, and even after you've beaten the length single-player mode can give you more time with the lovable little rainbowed rascals.

Pikmin 3 is by no means a radical jump forward for the series - it's more of what made the first two games so great, plus a little more to stand out on its own. Even though the difficulty curve may be a little on the lower side, the three playable characters, the new pikmin types, the new multiplayer modes and a whole new story to explore mean that if you've ever wanted to order around a pack of murderous little creatures on your own, cutting a swath through the inhabitants of an unaware planet while plundering its resources, then Pikmin 3 is the game for you.