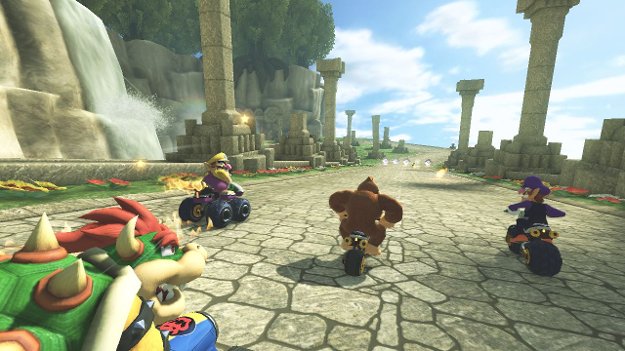 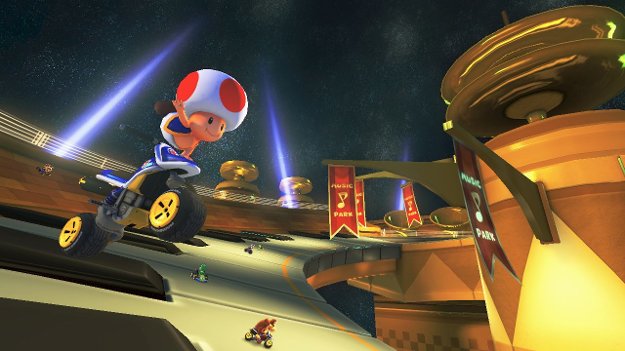 So, Mario Kart, if you haven't heard of it, is kind of a big deal. Released way back in 1992, Super Mario Kart popularized the genre, if not inventing it outright, and since then has seen a sequel released on almost every single one of Nintendo's consoles. The premise is always the same: a group of karters, pulled from all corners of the Mario games, race in a variety of tracks. That's it. No plot, no contrivances. Mario Kart 8 is the latest in the series, featuring numerous characters, a variety of race tracks to play on, new items, and a lot of fun to experience.

The list of racers you start with isn't very large, but expands as you get gold in various circuit races. While the roster gets up to 30 different characters, it's easy to see a lot of near-duplicates, like the baby Mario brothers or baby princesses (I miss Dry Bones, he was my favourite). You also start with the ability to customize your kart, picking three different categories (chassis, wheels, and parachute) to customize various stats. Like the racers, the more you play, the more you unlock, eventually gliding around in a pink cat-car with tiny little clown wheels and clouds that deploy to glide you gently down to the ground. The racing itself feels pretty tight, which is a good step forward from the last home-console Mario Kart game, on the Wii. I even found the motion controls better to play with, which I was surprised to discover. 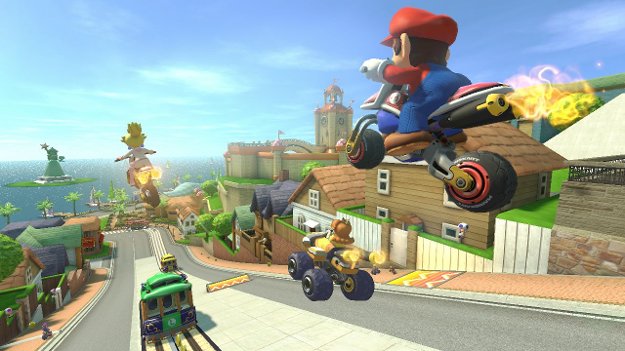 The second-biggest complaint I can lobby at Mario Kart 8 is that it doesn't have much going for it in terms of racing mode variety. There's the classic Grand Prix, Time Trial, and single race modes to play through, and that's really all there is. So once you've raced the 32 different races that the game provides, you've seen more or less everything it has. That's not to say the game is lacking in variety, far from it - each of the races themselves contain some of the best track design I've seen in a Mario Kart game, or really, any racing game, ever.

Thanks to the magnetic hover boosters, or whatever is attached to the bottom of the karts, tracks in Mario Kart 8 now have you gliding up walls, sideways into bodies of water, curling around giant statues, weaving and twisting, and in general just showing more creativity than they ever have in the past. You can find quick shortcuts by flying over parts of the map, checking out side alleyways, and leaping over chasms to get to a smaller, quicker part of the track. Even the tracks from previous Mario Kart titles have been redesigned, allowing you to swim through parts of them, climb vertical walls in others, and in general just see new life breathed into race tracks dating back as far as the original Super Nintendo release. 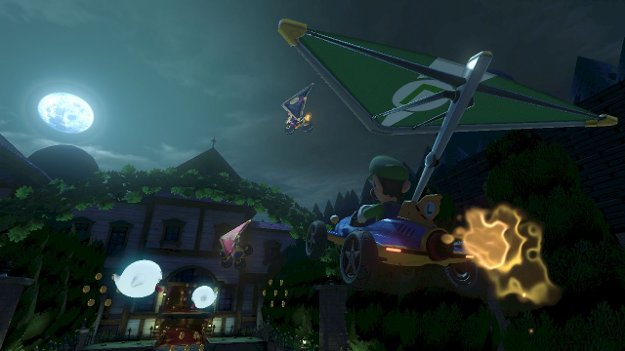 With all this comes some great visuals that stand out among many of the Wii U titles as some of the best, even in mutliplayer but especially in single player, when only one kart racer is the focus of the entire screen. It really impressed upon me what the Wii U could do with a bit of push behind it. After each race you can watch a 'highlight reel', showing some of the more fun moments of the race, whether it's someone getting knocked around by an attack, another racer bursting through to first place, or just an expertly-turned corner. This is surprising fun to watch in a group, and if you find one you enjoy you can always save it and tweak various aspects of it later.

Unfortunately, and in my opinion the biggest problem with the game, this level of racing imagination does not apply to the Battle mode present in the game. In fact, this mode is lacking any thought at all. See, instead of the series of battle arenas that every previous Mario Kart game has had, you'll instead find yourself and your opponents in the racing tracks that are present in the regular game, driving around in circles (in no particular direction, since there are no actual laps to be had here), trying to find each other and pop your opponents' balloons. 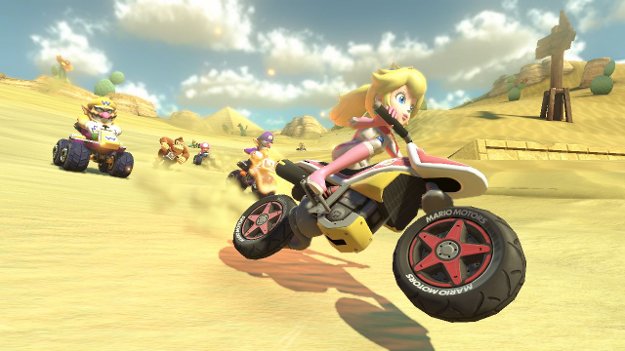 Suffice to say, racing tracks don't create fun battle arenas - most are too large, and finding an item is always a pain in the butt when you just want to launch a shell at someone's face. I can't begin to fathom why this was designed this way - it simply isn't fun to play, and turned what was often a great party activity into something that my friends and I now completely ignore.

There's an online mode here that works pretty well - you can join races and set up tournaments, but like many of Nintendo's online offerings, it's lacking a lot of ease-of-life features, like being able to make friends-only matches without actually having to use out-of-game means to coordinate them. Similarly, the lobby system isn't terribly well-implemented, allowing chat only with friends, which makes things feel kind of impersonal. As always, I really wish Nintendo would realize that many people who play their games are, in fact, adults. 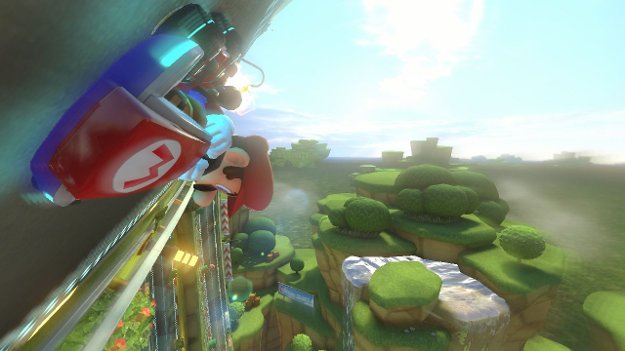 Mario Kart 8 is probably the best in the series, but with caveats. I wouldn't have minded some extra modes to play, especially in single player - once you've got gold in all the races, in all three speeds, there' really not much else to do, progression-wise. But it's really the utter lack of any battle arenas that drags the game down pretty hard - of course, if you never really played this mode then this complaint won't affect you, but I was really looking forward to some sort of crazy Block Fort in HD. That said, the game is great, and the best racer on the console to date. Battle mode aside, it's certainly the best in the series, with new crazy tracks and imaginative redesigns of old kart stomping grounds, and with some core gameplay that is simply rock-solid to its core, it's sure to delight almost anyone who picks up a controller to play it.