Kirby and the Rainbow Curse (Wii-U) 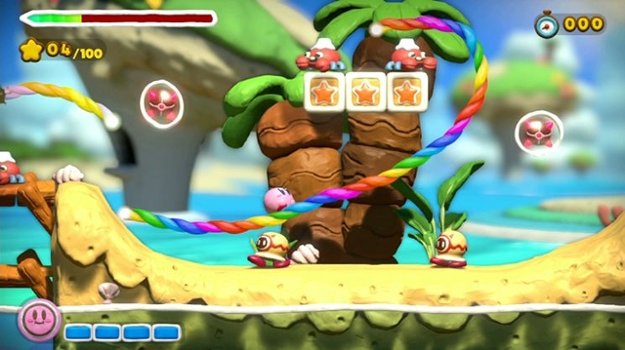 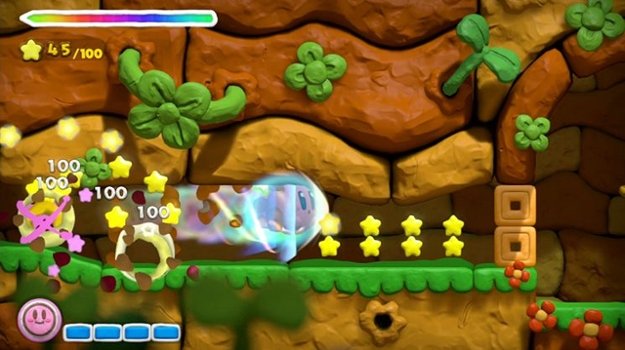 Kirby: Canvas Curse was a game that came out for the Nintendo DS, one in which the titular pink fellow was stripped of his limbs and forced to move along lines you drew for him while navigating hazards and taking out foes. Now, many years later, a sequel has appeared in the form of Kirby and the Rainbow Curse, for the Wii U. Again, Kirby must take to the rainbow ink paths drawn by you on the gamepad to fight off the inky enemies created by a mysterious foe

The game certainly looks appreciably different this time around: the entire world is made of clay, looking like something out of a stop-motion film, which adds quite a bit to the game's appeal. Though nice, what's disappointing about this is how the game fails to capitalize on the possibilities afforded by this theme - the only time I can really think of where the game seemed to remind me that it was made of clay was smashing into a boss's face, seeing it smoosh inwards - like someone had stuck there thumb into a mound of playdoh. Otherwise, there isn't much here to use this theme, which disappointed me the more I played.

Much like the original, you don't actually control Kirby directly, instead controlling the path he takes by drawing rainbow lines on the gamepad, or by tapping Kirby to make him dash forward. This works most of the time, but during dire situations Kirby's movements can get a little fiddly, rolling on the wrong side of the line, bouncing off of walls that I thought were ramps, that kind of thing. These mistakes aren't likely to lose you a life, but the problems can pile up, getting annoying in some of the longer levels. This applies even during the transformation sequences, where Kirby turns into a variety of different vehicles. Though these change things up by having you shoot missiles where you tap, or guiding your path directly along places you point, there are still times where the controls get in the way of the game.

The game takes place over 28 levels - 7 worlds, with three levels and a boss each. Though the game isn't particularly long if you try to get through it, much of the length of the game comes from trying to collect all the secrets in each of the levels, and complete all the challenges (such as beating bosses without taking a single hit). Otherwise, the game is fairly quick to get through...though that said, the levels feel like they go on a touch too long, as if they should end a couple minutes before they do. The game is not without challenge, though, even if you don't attempt to get the hidden collectibles in each level. In fact the game gets downright difficult fairly quickly, despite its deceptively cute outer shell. It wasn't long before I found myself losing lives left, right, and center as I tried to stay ahead of nimble enemies, scrolling levels, and powerful traps.

Still, the more you play the more it's easy to see how formulaic much of the game can be, despite the delightful appearances. Every world will have you transform, almost every level has a locked door that requires you to find a key...there's not much variation in the levels as a whole, which is easily evident. It's unfortunate, given how creative the game looks, that the level-to-level gameplay doesn't match. This makes it a bit of a pain to get through more than a couple worlds in one session of gameplay, but when taken in bite-sized chunks, the game still holds up.

There's a co-op mode to play through, if you so desire to play the game with others, though it's bizarre in its implementation. New players take control of different Waddle Dees, which offer different abilities than Kirby: jumping and stabbing, to be precise. Oddly, this makes those playing as co-op partners stronger than Kirby, as they can just run around the level attacking and defeating enemies, essentially being able to do anything that Kirby does, but better. Sure, the pink guy is needed to draw platforms and move the camera forward, but that's really it. It does make for some fun co-op when playing with someone a little less accustomed to games, however.

For people who have played the original Canvas Curse, Kirby and the Rainbow Curse will likely disappoint, despite its colorful appearances. For newcomers, however, it remains a fairly fun platformer to play through, despite its flaws. Though it doesn't reach the potential it should be able to, it still remains a pleasant title that can be enjoyed by those of all ages.