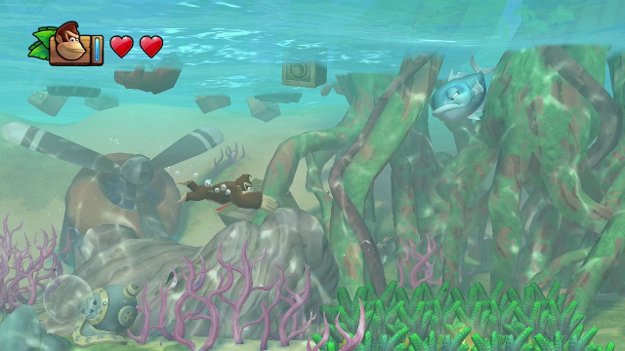 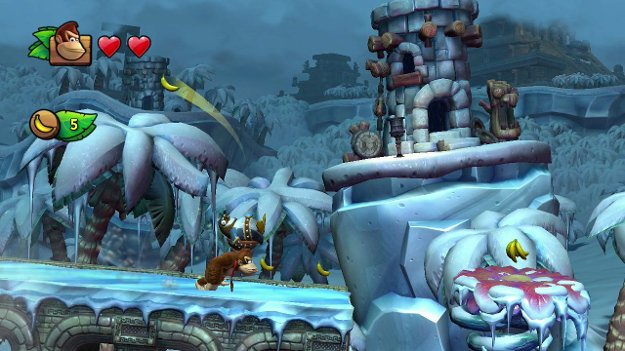 Donkey Kong: Tropical Freeze is one of those games that makes you hate it and love it at the same time. Though on the surface it appears to be a fairly simple platformer (due in no small part to its cartoonish graphics), it doesn't take more than a couple levels before you realize that this is anything but - instead, you find a game that can be maddening in its difficulty, but one that makes up for this with inventive level design, bright visuals, and a musical track that keeps you coming back for more.

The game is standard Donkey Kong platforming - go right through themed worlds, jump on enemies, burst through barrels, collect things and beat the boss at the end of the worlds. In single-player mode, you play as Donkey Kong, and can also grab a partner to help you along, each with their own special ability: Dixie Kong lets you use her hair to get a bit of a vertical boost, Diddy has a jetpack that will allow you to hover, and Cranky Kong (yes, the old ape is here) has a pogo stick of a cane, allowing you to bounce to higher points and traverse spiky floors. They also each come with a special ability that, when charged turns enemies into various collectibles like lives or banana coins. 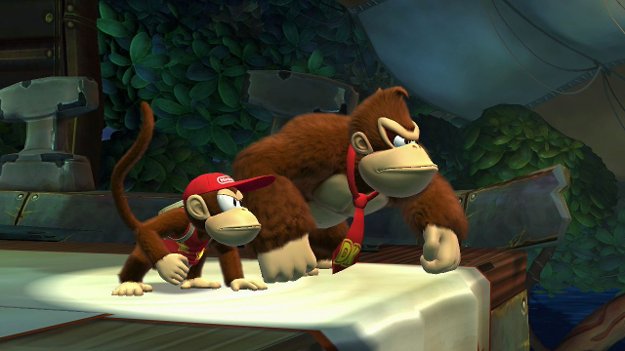 Each of the levels in Tropical Freeze has its own charms, and there is rarely a moment when you feel like you're running through something that you've already done. My personal favourite is an early one, where you're traversing a paper-crafted safari adventure through the savannah, with everything bobbing to the gentle tunes in the background, something that actually had me return to the level more than once to experience it again. Each of the levels are well made, with something to separate almost all of them apart from the rest.

But even if getting from point A to point B isn't enough for you in a platformer, Tropical Freeze offers more to do in each level: for instance, much like previous titles, you can collect K-O-N-G letters and puzzle pieces to unlock various gallery bonuses. In addition, many of the levels feature secret exits to find that take you to new levels - you can actually miss out on quite a bit of the game if you don't hunt these down. And if you're so inclined, you can try a time-trial run to try to get medals of various quality, to really see how good you are. So even when you've beaten the last boss of the game, there's a good chance there's quite a bit more for you to hunt down and see. 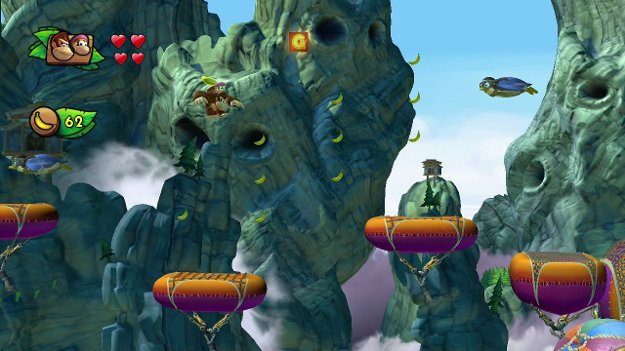 I went into the game thinking that it wouldn't be too difficult to play through, but make no mistake: Tropical Freeze can test your limits, with a combination frantic platforming, pixel-perfectly-timed jumps, and keen reflexes required to get ahead in some of the levels. Extra lives are thrown at you like candy, but don't be surprised if you end up burning them faster than the game can supply them to you. This almost borders on frustration in some areas, where difficulty spikes threaten your enjoyment if you don't get a kick out of beating the really tough challenges the game can provide.

Luckily, there are a few ways that you get access to that can help with this. Arguably the best inclusion is that of the in-game store, run by Funky Kong himself, that allows you to pick up bonuses that can be equipped before running into a level. These one-time use items will allow you to do such things as holder more breath underwater, taking an extra hit of damage, start with a buddy in tow, or survive a single fall into a pit. Later, they become invaluable. The second, perhaps more fun option, is the co-op mode that the game provides. 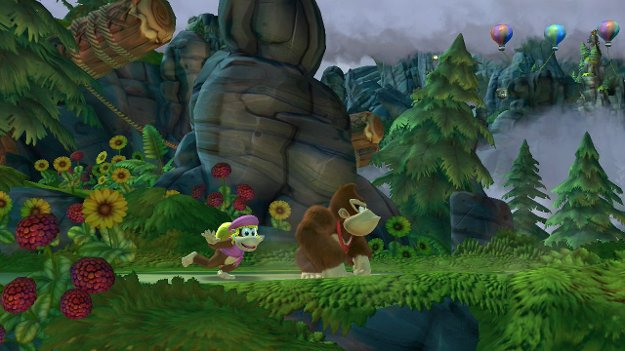 A second player can bit up a controller and become either Diddy, Dixie, or Cranky, and run, jump, and perish simultaneously along Donkey Kong. This means that if one person kicks the bucket, you at least have a chance for the other person to get a little farther. This is fantastic for the bottomless pits that the game throws at you. The co-op mode is great to play, but there were times when my buddy died simply because the camera wasn't sure what to do, and left him behind. Also, when on a mine cart (or log flume), both characters can jump, resulting in some very hard-to-manage anarchy. And when both die, two lives are lost, quickly sapping up that pool.

That said, it's a blast. The whole game is, really. It's an exemplary platformer that does nearly everything right, save for some difficulty spikes and minor quibbles in co-op mode. Great visuals, a stunning musical soundtrack, and some truly creative level design that balances frantic and peaceful all come together for what is probably my favourite platformer in memory. Just beware the challenge you'll be quick to find a game that really shows what its like to barrel-blast through a colorful banana canopy.