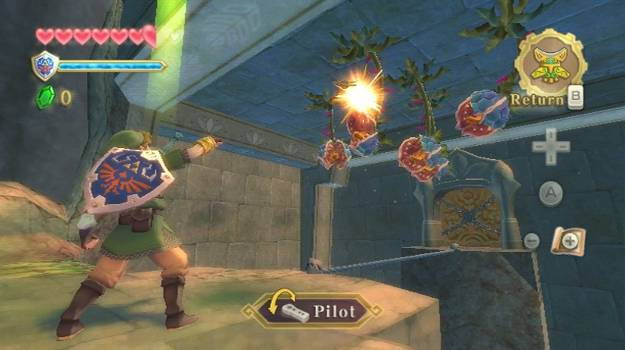 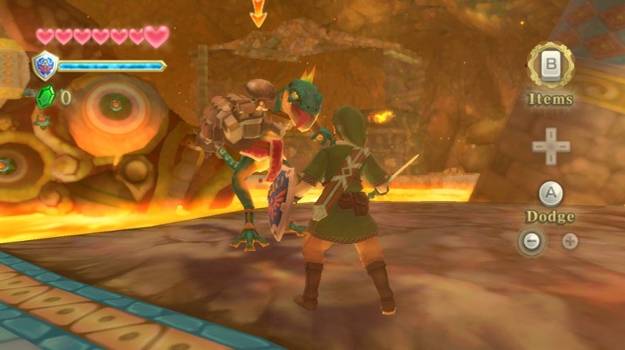 Link will forever be saving Zelda it seems, as yet another new chapter in Nintendo's The Legend of Zelda saga is ready to take its turn in the 25-year old franchise. Will it promise some of the usual Zelda-esque action you know and love, while adding a new twist? You can bet your triforce on it.

The first thing you can't help but notice, is the inclusion of the Wii Motion Plus in the gameplay. They've incorporated it very well, enhancing puzzles and fights by having targets you can only hit/block at certain angles. While fighting one of the bosses, using the nunchuk as my shield, I had to aim my shield at a particular angle so the boss would bounce and throw herself off when she would hit me. As she recovered from my block, I could then attack her with a well-aimed slash under her armour. Partway through the battle she changed tactics, and once again I had to figure out her weakness and go from there.

With that said, bosses and enemies have become trickier to attack. Flailing your limbs as you play won't do you any favours, you must figure out the best approach and follow suit with good aim and reflexes.

It seems Skyward Sword took some cues from Wii Sports Resort when it comes to handling your weapons. The standard bombs and bow and arrows are present (with more weapons as you go along I'm sure), each with their own way to use them. Bombs can be handled like a bowling ball, where you can literally roll your bomb into any hole, crevice, or group of enemies you can reach. You can also throw them overhand at your targets, or simply set them down as per old times sake. The bow and arrows are handled much like a real bow and arrow, where you hold the WiiMote in front of you as though it's the bow, and pull back the nunchuck like you would the string; take aim and press the button to shoot your target, taking into account distance and height as you go. While they weren't in the demo, I'm certain all the rest of the weapons you acquire as you go will have more realistic 'handling' than you've ever experienced in a Zelda game before.

There are even skyward levels (go figure, considering the title) where you're flying on the back of a bird, and you're using the Wii Motion Plus to move where you want to go. Swooping and soaring is all the more fun when each twist of the wrist or turn of the hand affects where you're heading.

With the three demo levels I was able to try, one thing that stood out quite a bit are the stellar graphics. Having seen those graphics in Nintendo's beautifully rendered movie-esque HD, there's no doubt many a Legend of Zelda fan will swoon with joy.

There weren't many details given as to what the storyline will be this time, but is it really so hard to figure out? The Legend of Zelda series has a formula that continues to win people over, and will continue for a while yet.

Skyward Sword will no doubt be a must-buy on many people's gaming lists; yours truly is no
exception. Who can resist a new adventure with Link, where there's more involvement in the game, more precise movement, more strategy to contemplate, and more puzzles to solve? After you've had your fill of bowling bombs for fun and you set out on your new quest, the music we all know and love and the graphics you can't help but enjoy will all but absorb you into the adventure. Skyward Sword will be exclusive for the Nintendo Wii, and will be available to take home by the end of this year.