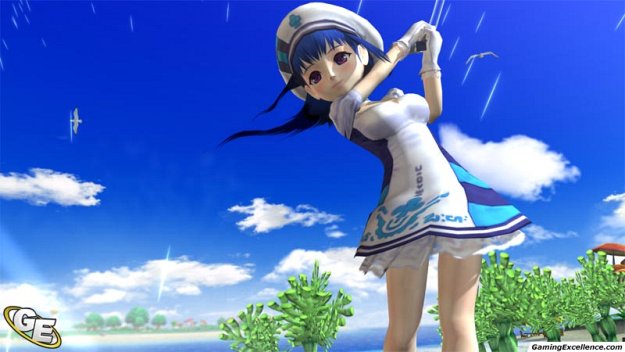 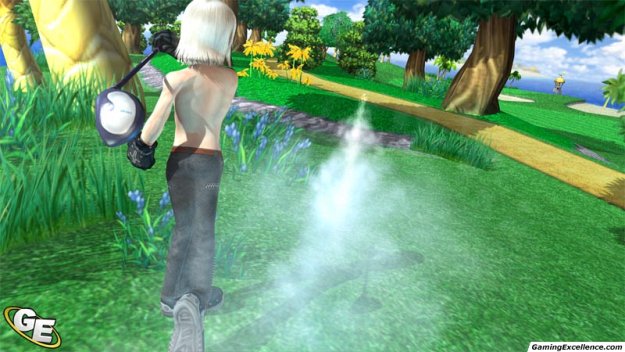 There was a dark period in my life when I was addicted to MMO's; WoW, Lineage 2, FFXI, City of Heroes/Villains, I played them all. And then I discovered "free" MMO's, the kind that you can play for free and only pay real-world money to buy in-game items that could "assist" you in your quest. This was an amazing discovery for me. I played Rappelz and Flyff and Xiah and never had so much fun. The games varried in quality, but the fact that I wasn't pressured into playing them due to a monthly fee, it was invigorating. While playing one of these, someone mentioned Albatross18, a golf MMO no less. As a fan of Hot Shot Golf and the Tiger Woods series, I immediately checked it out. What I found was an enjoyable, but flawed, experience that was incredibly addictive and deep. I liked the ability to build up my character and purchase various clubs, clothes and backgrounds, but I longed to be able to play it on my own without having others be a part of my Albatross18 experience. While there was a family mode, it didn't allow me to build my Pang (money - PP or Pang Points in Super Swing Golf) and so, felt pointless. But then I heard of a game called Super Swing Golf which instantly reminded me of Albatross18. After some digging, I found that it was really the same game, with the same characters, courses and add-ons (clothes, gear, items) but would feature a fully fleshed out single player mode and a swing mechanic that would take advantage of the Wii Remote. I was in bliss! Besides Zelda, this was the only other game I couldn't wait to get a Wii for. Luckily, SSG lived up to all my expectations and is sure to please any golf fan.

Unlike Wii Sports' golf game, Super Swing Golf features a golf swing mechanic that is both easy and natural. The interface looks like the typical triple-click affair, but really is completely different. You hold your club as you would in real life, address the ball and bring it up as you would normally. You use this back-swing to set your power. Luckily, you can take your time to set it up and tweak it at will. Once you have your power set, simply click and hold the A-button and follow through (all the way) as you would on the driving range. The ease and beauty of this swing mechanic is incredibly rewarding and simply never gets old. If you find yourself having problems with it though (or are simply not enjoying it - or if it drives your dog crazy like it does mine) SSG also gives you the traditional three-click control option (something which should be included in a lot more Wii games). Using the swing mechanic though, makes the game a little more forgiving than the three-click option. Either way, the golf mechanic in SSG is amazing.

Super Swing golf also allows you to easily change clubs and a few other options while teeing up. Unfortunately, the camera views and camera controls are horrible and it doesn't help that your caddie doesn't always pick the best club or even the best placement for your ball. Each shot you will need to see the intended shot and adjust it taking into account lie, wind, etc. With each shot you will need to cycle through the camera views and then fiddle with the overhead camera (by holding down the B-button) and pushing/pulling the Wii Remote to/away from the TV) until you can actually see your ball. This is not handled very well and Albatross18 had a slightly better overhead camera view. Well, at least in was zoomed in more by default. The big problem here is that you can easily (and unintentionally) change the aiming on your ball by accidentally moving the camera around, so you'll always be paranoid when changing anything in "camera" mode.

You'll begin the game as one of two characters (unlike in the online version, you can pick either regardless of your real-life sex); Scout or Hana. To the delight of Albatross18 fans though, all the characters from the online game are included as well as the caddies, power-up items, clothes, courses and gear. SSG actually features a lot of stuff not found in the online game as well and you'll never have to purchase "cookies" (Albatross18's real-life currency) to buy any items. SSG also features full-fledged stories for each character. Some are available right from the start while others require a certain piece of gear or clothing to unlock. Needless to say, SSG's single player modes (including Pangya Fest -story mode, Stroke play and Match play) will keep the average gold enthusiast busy for well over 100 hours, and the fact that you'll constantly be earning PP to buy items and upgrade your character is another incentive to keep playing.

SSG also features a slew of multiplayer versus modes, but unfortunately, no online modes at all. Up to four friends (or a mix of humans and CPU opponents) can play in stroke/match games as well as balloon pop, a fun little diversion in which players simply try to pop as many balloons as possible while their opponents use Party Goods to hinder/annoy them in the process. And there you have the real difference between Albatross18 and SSG; one is based solely on online multiplayer while the other is based, primarily, on a deep and lengthy single player game. One happens to be free (although it will cost you real money to get all the clothes/items) and the other is a full price game. To me, the choice is simple, simply because I could care less about multiplayer in SSG and prefer to focus on building my character up and acquiring as much gear as possible. While I enjoyed Albatross18, SSG is what I always wanted and I couldn't be happier for it either.

In the visual department, SSG is a fantasy based golf game with colorful courses and cute anime characters. The game only runs in 480i and the graphics are nowhere near as nice as could be expected, but this really isn't the point of SSG or the Wii for that matter. In the audio department, the game features bubbly pop elevator music throughout and a few voice clips here and there. Nothing too memorable, but nothing annoying or hindering either.

In the end, Super Swing Golf is all about a deep, lengthy single player experience (although the multiplayer portion is quite robust) and a swing mechanic that feels incredibly realistic. Fans of Albatross18 will easily be swayed by this title and any real golfer should do himself/herself a favor and try SSG for the simple fact that while cute looking, it feels as authentic as can be. True, the camera can be a pain and the AI can be tough in areas, but Super Swing Golf is one of the better titles to grace the Wii yet. Pangya!