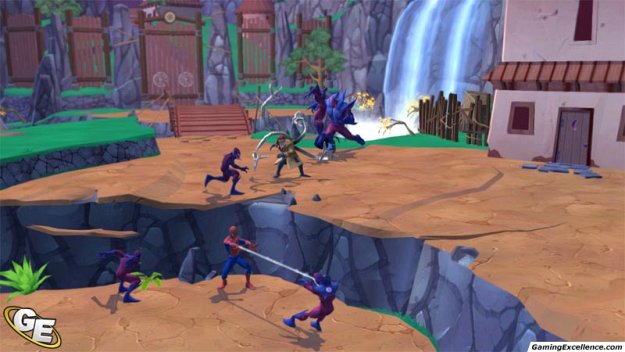 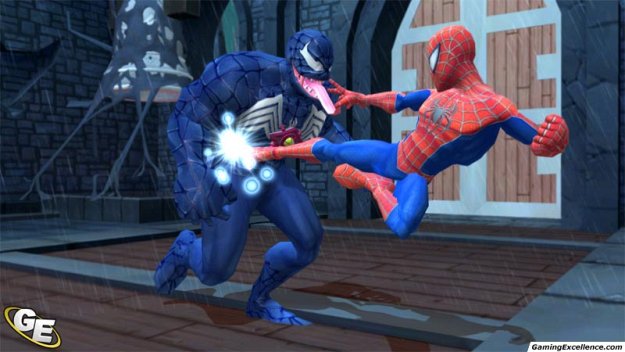 I really wanted Spider-Man: Friend or Foe to be about online social networking. Such a missed opportunity! Instead of average action-platforming, we could've had MySpace meets Marvel. Think about it. Friend requests for boss fights -- do you approve Venom, or alienate the alien by denying his virtual friendship? "Green Goblin has invited you to join the group "Oscorp, Inc.!" Pop-up ad-blocker mini-games! Inbox management would've been fun, too ("Sandman has sent you spam! What do you do?").

Instead, it's another plain, relatively pleasant superhero action-platformer -- a game where you earn friends the old-fashioned way: beating the hell out of them. A certain fishbowl-headed villain has brainwashed his evil colleagues, and as Spidey, you web 'round the world converting them to allies. Between you and them, however, are phantoms -- the holographic/symbiont fodder you'll button-mash through for about six hours. These alien thugs arise after meteors crash conveniently into Tokyo, Nepal, Cairo, Transylvania, and a deserted island.

Among Scorpion, Rhino, Green Goblin, Sandman, Doc Oc, and others, Spidey's nets thirteen pals to punch with. Only a few Marvel notables are missing -- Shocker, Electro, and Kingpin being three of them, but the addition of characters like Blade and Venom make up a good group. Unfortunately, it's a cast that displays only a few nuances during combat -- a couple basic attacks and a pair of special moves each. Venom might go sea-urchin on some enemies and knock off a few baddies with his "venomous breath," but all your companions lack the more stylized arsenal of moves accessible to Spider-Man.

Then again, maybe it's Spidey's combat abilities are just that much better. This is easily the centerpiece of the game -- giving the player a well-rounded webslinger to fight with, and coupling these attacks with fluid, fun animations. Even better, this system is kept exceedingly simple: you'll tap out a two-button combo to produce most moves, and the skills grow as you upgrade them between missions. Spider-Man's three move sets are pretty balanced, with web line, web shot, and a third set that lets him ensnare and disable enemies for a short while. These attacks are more than enough to deal with the handful of enemy types the game throws at you, and actually compensate for their lack of variety -- you'll get the same walking punching bags over and over, but they're fun to knock down because Spider-Mans's attacks are so fleshed-out.

In a given skirmish, Spidey will slingshot Phantoms into another, knocking oncoming enemies on their back. He'll kick a few off the edge of the environment. He'll disable more powerful Phantoms, wrapping them in webbing so he can deal with the minor baddies first. He'll flick his wrists for a few quick web shots to finish a Phantom off. Yo-yoing foes into each other is a blast, and these commands flow freely from the controller because the commands are kept simple, making the combat overly easy for experienced gamers, but a blast for any picking up a beat 'em up for the first or second time.

But what what we have here is X-Men Legends Lite, in other words. Playskool Ultimate Alliance, you might say. What Lego was to the Star Wars license, Friend or Foe is to Spider-Man here -- bringing super-simple mechanics and uncomplicated (to put it lightly) level design to the genre. The environments Spidey crawls through are visually sufficient. Textures aren't too repetitive, and sport a cartoonish aesthetic that keeps things relatively lively as you fight. Unfortunately, aside from a few bosses and minibosses, the way you advance through Friend or Foe is almost universally identical: enter an area, and the gate leading to the next one closes. Some Phantoms teleport in. You defeat them. Gate opens. Continue and repeat until you've completed the level. But because the spots you'll do combat in are so similar (flat, wide areas for the most part) things get tiresome even quicker, even while you're picking up new friends to fight with and adding new abilities.

There's a few incentives along the way -- namely racking up tech tokens, the currency you'll use to upgrade Spidey's moveset and his friends' combat power, but this accumulation process is less rewarding than what you'd find in something like Ratchet & Clank, for example. The game does toss in a versus mode and five overly-easy battle arenas that you stumble upon through stages, but these mild additions don't make up for the lack of online co-op or a genuine instant action/challenge mode.

Together, Spider-Man: Friend or Foe is a package that does okay, but isn't necessarily intended for anyone old enough to play games like Marvel: Ultimate Alliance. Deep character customization, varied environments, or challenging bosses aren't to be found here; in fact, and the latter is something that seems especially abbreviated: of the thirteen characters you add to Spidey's stable, you only actually fight seven. Spider-Man has a laundry list of playful, well-animated moves to take down Phantoms with, but his sidekicks don't benefit from the same attention, being limited to basic attacks. There's a decent experience to be had on the Wii, where intuitive controls mirror Spidey's creativity in combat, but otherwise, Friend or Foe can be written-off as neither: the kind of game that you can't love, but can't hate either.